Bringing enormously tall cakes to the heart of The Fan. Nicole Jessee had no qualms about baking a 3D toilet cake that read Life goes to shit after 40.

“But I’m not putting anything in the actual toilet,” she said, referring to the customer’s idea of fitting the doughy bowl with a Tootsie Roll. “Every cake that I did, I had to think: do I want this on my website?”

But even cakes she didn’t post to the web wound up on there. A local divorce attorney threw a 100-person divorce party and asked Nicole to build a cake of a heart split down the middle. “Her side had her with her kids with her house, and the other had him with his business.”

Party attendees snapped photos of the cake and shared them on Facebook. Before long a national publication (Nicole doesn’t recall which one) ran one of the photos and producers of Montel Williams’ day-time talk show even contacted her asking if she’d bake a similar cake for a show about divorce.

There were also the bachelor and bachelorette party cakes. “I would get calls about these, and I would literally think people were trying to prank us,” she said. They weren’t. “I’m not even comfortable saying what they wanted.”

But in those days outré cakes were Nicole’s speciality. “I didn’t want to do the three-tier white wedding cakes,” she said about the early days of Shyndigz. “I really wanted to push it as much as I could and do the more artsy cakes.”

Nicole has since hung up her apron when it comes to toilet cakes, but she hasn’t bid adieu to desserts overall. She and her husband, Bryon, have given Richmond its first dessert cafe and given the city its sweet tooth.

The lines that regularly stretch outside and down the block from Shyndigz seem like icing on the cake. But Nicole and Bryon haven’t forgotten how they got here. From running two businesses at once, a nursery that specialized in quiches, to having good things happen out of the blue, Shyndigz had a long road getting here.

Nicole and Bryon had two businesses on opposite ends of the block. On end was All Art Gallery. On the other was Java Moon, a coffee shop with light fare.

“Between the two places we had one employee,” Bryon said about their time in Charleston, South Carolina circa 2000. “And so we would get busy at one of the locations and put a sign on the door [of the other] saying ‘Back in 10 minutes.'”

Nicole nodded. “We would close one to keep the other one open,” she said.

Not only did the couple spread themselves too thin over two businesses, they spent more than they should’ve on print, radio, and TV ads. “We spent so much money–money we didn’t even have,” Bryon said.

Bryon a third of the total number of employees running two businesses simultaneously, and he was also in culinary school. On top of that, he and Nicole had a wedding to plan.

Their fingers in too many pies, the couple realized the only way to ensure marital success was to step away from it all. To get a fresh start, they decided to move somewhere new.

Ceramics and plants…with a side of quiche

Shortly after arriving in Richmond in 2004, Bryon found work at Ukrop’s and Nicole at Sneed’s Nursery.

Not one who easily hides her artistic side, Nicole eventually bought her own greenhouse and started Art to Grown, a business combining homemade ceramic crafts with plants.

Food came into the equation a while after she and Bryon had been vending local farmers markets. “We kept seeing all these food vendors there, and restaurants, and bakers and we thought, ‘Hmmmm,'” Nicole said.

Soon after, Art to Grown was selling ceramics, plants, and Bryon’s quiche.1 “People liked his quiche and they kept coming for it every week,” Nicole said. “And from that we started catering.”

They began by bringing the youth of their local church into the kitchen to help them cook Wednesday night dinners. Word traveled beyond the congregation. Richmond Times-Dispatch even wrote an article about the dinners. “People started calling our church asking for our number for catering,” Nicole said.

One call came from organizers of a Baptist conference that hired the duo to cater the three-day event in Richmond, Nicole said. “We took that money and opened Shyndigz debt free.” 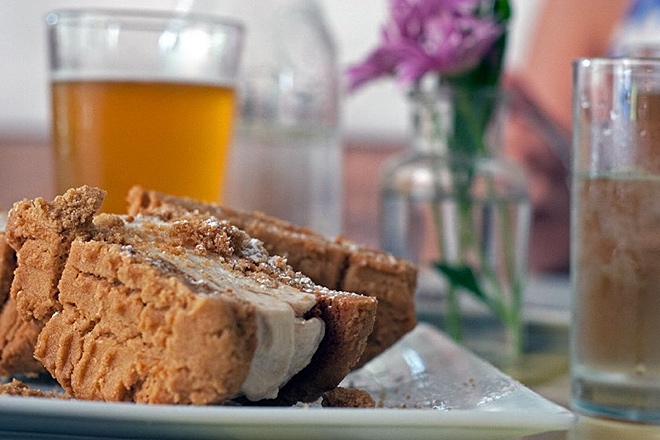 In the months before Shyndigz opened in 2010, Nicole created her own side job baking cakes. It was back when TV shows like Cake Boss and Ace of Cakes dominated ratings. Nicole realized no one in Richmond did these eccentric cakes, so she cut out a slice all her own. “I couldn’t keep the ingredients in the kitchen, I was so busy,” she said.

In June 2010, she and Bryon opened Shyndigz at 5716 Patterson Avenue. It was there that she did the toilet cake, divorce cake, Escalade cakes, and cakes for pretty much everything else. She worked the delicious line between art and food..at least for a while.

While Shyndigz’s cake business boomed, Nicole and Bryon decided to maximize the Patterson Avenue space with a dessert cafe. Kaminsky’s, a Charleston dessert cafe the two loved, inspired the idea. “Richmond’s never seen a dessert cafe,” Nicole said. Whereas a restaurant devotes just a section of its menu to desserts, Shyndigz makes desserts the entire menu.

It was an ingenious idea, albeit ahead of its time. “We didn’t have anyone in there for two years,” Nicole said. People would leave Yelp reviews wondering why a bakery was open so late. “They must be laundering money,” was one of the comments, Nicole said.

But as with their church dinners, Nicole and Bryon eventually got the media’s attention. In 2012, Richmond Magazine named Shyndigz Best Dessert in Richmond. “And we got really busy. People were lined up out the door,” Nicole said. When the magazine bestowed the distinction again in 2013 and 2014, Nicole and Bryon realized their 40-seat spot wasn’t big enough.

Earlier this year, the couple moved to 1903 W. Cary Street. But just because you’re successful at one spot, Bryon said, doesn’t mean it’ll move with you to another. The two risked their money and time on the hope Shydigz would thrive. “We put everything on the line,” Bryon said. “And then, opening night, we had a line.”

“I had a tear that rolled down my cheek,” he said. “I looked at Nicole and said, ‘I think we’re going to make it.'” 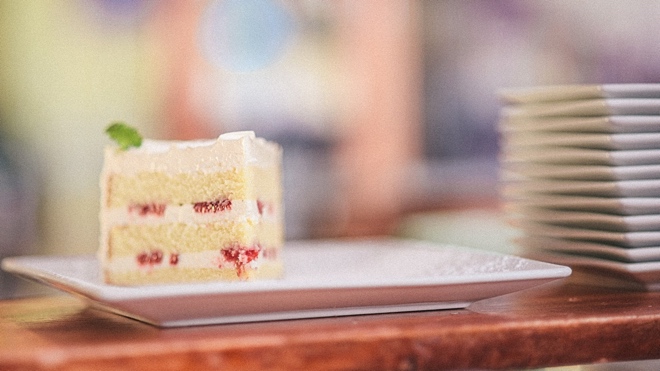 At roughly 150 seats, 3 the new space was over three times as large as Shyndigz’s previous location. “We’ve been here for five months and we need more space,” Nicole said. “That is our biggest problem.”

One reason the lines outside the business have followed Shyndigz is the food. The couple said they use top-shelf ingredients and never cut corners. When plates come out, the dessert on it clocks in at over 5” tall.

“Our desserts are huge,” Bryon said. “Often times, people can split them between two or three people. But the problem is, no one can agree on what to get. So we go through a lot of to-go containers.”

When newcomers ask Bryon want he recommends they eat he says, “The Fresh Fruit Cake put us in business,4 but the Salted Chocolate Caramel Cake keeps us in business.”

The Chocolate Carmel is Nicole’s favorite. “And it’s Richmond’s favorite for sure,” she said.

Making the city’s favorite desserts is time-consuming. One Chocolate Carmel takes about three hours to make. The reason Shyndigz is open four days a week isn’t for the ample free time. “It literally takes six days to get ready for four days of business with 40 employees,” he said.

The busiest nights are often on Saturday. “We have a line down the block,” Nicole said. Shyndigz can serve up to 1,000 customer on Saturday nights alone.

In addition to its dessert staples, Sthyndigz offers rotating cakes du jour. “You’ll have groups of people waiting on the Oreo Cake,” Bryon said. “They’ll put it on their Google calendar.”

But the desserts themselves isn’t the only pull Shyndigz has. “The reason we created this is that we wanted people to have an experience,” Bryon said. “To sit and maybe have a glass of wine or a local beer5 and just catch up with friends.”

Nicole agrees. “This whole place has been built with love. I know that’s so cheesy, but it’s so true,” she said. “I do want people to come here and have an experience. If they’ve had a bad day, this is just a little relief that they can get.

Shyndigz will get some relief when it expands operations to property just down the street. They’ll move customer pick ups to that site, as well as give those in a line a comfortable place to wait before they’re seated. Nicole said the couple is also working on “another niche concept.”

Even now, Shyndigz has the appeal to franchise beyond the city. But neither Bryon nor Nicole have any interest in shipping Shyndigz across the state, region, or country–the city’s first dessert cafe will stay in the city.

“I want Shyndigz to be in Richmond for a long time,” Nicole said.