As the parade of spring and summer kids’ movies rolls by you, Rio will stand out as a dazzling, feathery tribute to animation. As an added bonus, the rest of it is passable!

A kid’s movie has two goals: to make the kid laugh and to make the person who drove them there laugh, because that combination is the one that sells tickets. Kids have the whining power, and we have the wallets. 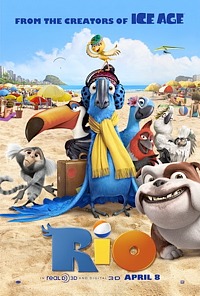 Well, if we want to be precise, these movies also set out to plant the seeds of merchandising frenzy. That’s nothing new, of course. When I was a kid, I began making my case that I needed the Little Foot stuffed animal before we even left The Land Before Time‘s theater. And, to my surprise, my mother trotted me right over to JC Penney (Cloverleaf Mall, holla!) and did it. Yes, the woman who takes an unnatural amount of pleasure in resisting the urge to buy branded items actually forked over an amount of money that normally would have made her turn pale and need to sit down, just so I could go home with a big, plush baby dinosaur. Why? Because she liked the movie so dang much! Appeal to the wallets, my budding kinderfilmmakers, and you shall have all of the clams you desire!

It follows that the casting of movie stars — those that parents really liked in, say, The Social Network — helps to up a film’s profile, even though you never see their famous faces. That represents a huge investment for the production company, since seasoned voice actors would have cost a fraction of the amount and probably have done just as well, if not better.

But what am I even talking about here? Why, the brilliantly hued, addictingly festive Rio! Spring is an excellent time for kids’ movies, and so I packed up my nieces (11 and 8) and rolled into a world where everyone laughs uproariously at every joke. Weekend matinees with a trillion kids are kind of nice, once in awhile! And, after a weekend of suffering through the sugary tripe they stare at on television, a decent movie with a somewhat clever script felt like Shakespeare.

Rio is good — good enough for your kids and good enough for your brains. Though not as memorable as a Pixar flick, Rio has a distinct advantage of being set in beautiful, fascinating Brazil during Carnival. The lush colors, sounds, and landscape of a different (but real) culture really seems like just what the digitally animated world needs to kick it up a notch. Now my nieces know about Brazil, and I want to move there. Win/win!

Really, Rio is pretty basic. Cute script, cute premise (displaced blue macaw goes back to Brazil to mate in a laboratory with the only other existing macaw, a plot that may inspire some “how are baby macaws made” questions), fun music, and stunning animation. I found Anne Hathaway’s voice talents, like I find everything else she does, awkward and distracting, but Jesse Eisenberg was charmingly uncomfortable as the bird-out-of-water, Blu. I expected to roll my eyes at will.i.am and Jaime Foxx, just as a reflex, but they were good as the comic relief. My nieces agreed that Tracy Morgan’s bulldog stole the show, with Jemaine Clement’s sinister Nigel as a close runner-up.

I wish Rio could get an Oscar nod for costume design. Even if the costumes of this fictional Carnival consisted of ones and zeroes on a chip somewhere,* surely they began as designs on paper! Honestly, I’d recommend the film for the glittery visual spectacle alone, especially since, you know, the ending is so upsetting and grim.

JK, everything turns out for the best. The exotic bird kidnappers do not win. Is…that a spoiler?

If you miss Rio, you’ll survive, but if your kids are squawking about going to see a movie during Spring Break, this is your best bet. My nieces spent that evening doing the dishes gratefully, and that’s something I think you’ll be able to get behind.