Those folks who only offer rants and vitriol are known as “trolls.” A troll is the person who consistently posts spiteful comments ranging from threats to nonsensical babbling just to fill up space. Just to bother. Just to provoke.

troll (n.) a person who submits deliberately inflammatory articles to an internet discussion

The beauty of this giant penny dreadful called The Internet is that it allows everyone to express themselves freely. This is also its downfall.

The instant you feel like googling something, whether it be some news item you just heard about or a plot twist in a TV show you like, you’re confronted with this issue. Everyone has an opinion, and a simple Google search requires that you wade through mountains of reactionary, useless posts and comments. Even the most seemingly uncontroversial topic in the world will be bathed in rants and vitriol.

Those folks who only offer rants and vitriol are known as “trolls.” A troll is the person who consistently posts spiteful comments ranging from threats to nonsensical babbling just to fill up space. Just to bother. Just to provoke. Message boards, news sites, blogging sites, Twitter, and maybe even your Facebook feed are full of them. But the interesting part is that behind that cynical, hate-mongering beast is a real person, just sitting in the dark in their parents’ basement with nothing better to do. Likely, these are human beings who would never confront others in public with such arrogance. In real life, they may even be some semblance of friendly. 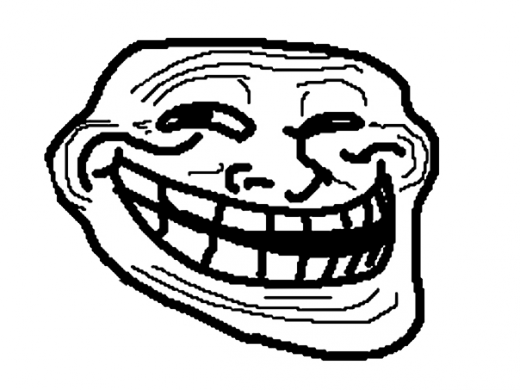 A large part of the problem is anonymity, or at least perceived anonymity. “If you aren’t going to say something directly to someone’s face, then don’t use online as an opportunity to say it. It is this sense of bravery that people get when they are anonymous that gives the blogosphere a bad reputation,” said Mena Trott, cofounder of Six Apart, in an article on Times Online.

The same thing that can make the internet so honest and candid at times can also encourage more vicious attacks. People who have trouble talking freely about their lives and feelings tend to do it more easily on blogs and social networking sites. Likewise, haters find it easier to hate when they don’t think there are consequences involved.

But as Judith Martin observed, “We already know that anonymous letters are despicable. In etiquette, as well as in law, hiring a hit man to do the job does not relieve you of responsibility.”

Another part of what fuels the trolling phenomenon is convenience. It’s so much easier to post a quick, mean comment than to have a long talk, or to write an organized and well-thought-out post. Jabs and snickers that wouldn’t make it past a troll’s lips in a real conversation are suddenly brought center-stage.

Yet even without anonymity or convenience, pretty atrocious levels of trolling are reached just for sheer jealousy’s sake. The good old-fashioned desire to feel better about oneself by tearing someone else down; that strange misconception that there’s a limited amount of wellbeing in the world and that you have to take it away from someone else in order to experience it yourself.

The first ever jailing of a troll this year in Britain emphasizes how tenacious some of these types can be. And though this is an extreme case, trolling is becoming ubiquitous on the internet. Celebrities expect these things and probably embrace them — for no PR is bad PR, right? — but to the rest of us, this kind of targeted harassment is also becoming familiar. I doubt there are many Richmond Proper readers who haven’t been attacked by a troll in some manner during their online existences.

What follows are a few principles for dealing with this fact of internet life.

Don’t be a troll.

The issue of trolling can be diffused in a very simple, playground sort of language. Yes, what your mother told you still applies: If you can’t say something nice, don’t say anything at all. Act civilized, or go live in the wilderness with the other animals (note: you cannot bring your laptop to the wilderness).

Not giving trolls the attention they so desperately desire is your best bet when you encounter one.

Have an etiquette question and need some advice?  Email tess@rvanews.com.