Rent space and get cookin’ at the Bearded Kitchen

Three bearded dudes are on a mission to provide shared kitchen space for the bearded and clean-shaven alike. Tucked away in an industrial neighborhood off Hull Street, the Bearded Kitchen is an oasis for food business operators who share a very common need–more space. Bearded Kitchen co-owner David Ruble, along with his wife, Cat, owns and operates Tater Dave’s, a boulangerie as well as purveyor of other baked goods. In 2014, he found himself fed up with not having adequate space to house his growing business. He wasn’t alone. He and fellow food business operators Daniel and Brian Graff (formerly of Super Fresh and currently of Galactic Tacos, respectively) were sharing kitchen space in the basement of the now defunct Lair on Main Street, and the time and space they had just wasn’t cutting it.

And yes, all three of them have big, gnarly beards. 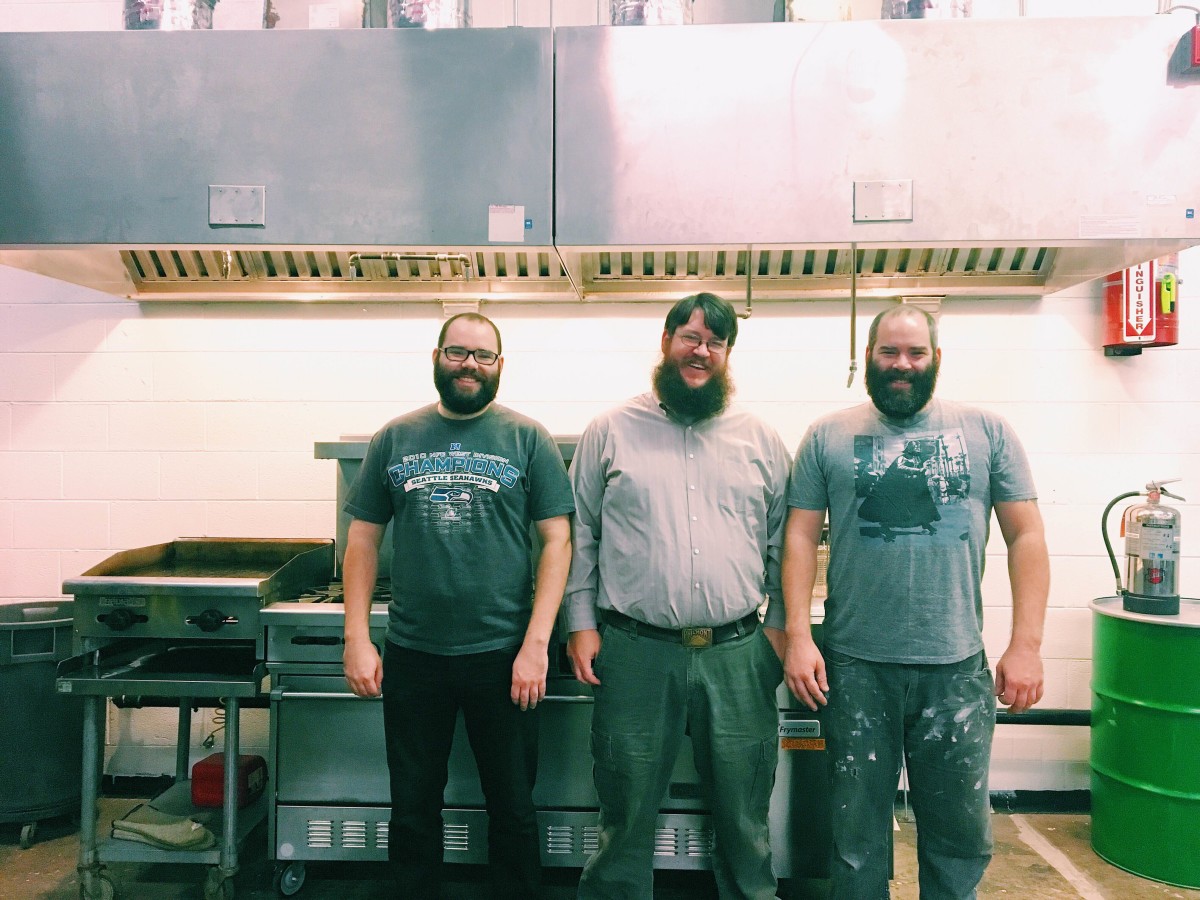 “We were all working in a space that wasn’t really working for us,” says Brian Graff. “And it was like, ‘Hey let’s put our heads together, put our money together, and see what we can do ourselves.'” The trio had their own equipment, including Ruble’s convection oven and Graff’s stand mixer. They just needed to find the right place to put it.

A PLACE FOR US

In April of 2014, they found what they were looking for–a roughly 3,000-square-foot, no-frills location with sprawling bare walls and a single mop sink that they could transform into the shared kitchen space of their dreams. They took on as much of the buildout themselves as they could manage. Brian Graff recalls, “We did everything we could to cut costs and get the work done ourselves. Our dad has as much work hours in here as anybody. We were trying to think ahead about what kind of producers were going to be in here.” After all the blood, sweat, and tears and an investment of about $40,000 in a new range, hood, gas line, and plumbing line with grease trap; the bearded buddies were ready to welcome their first tenant.

CPA by day, baker by night and weekend, George McDowell, owner of Poor Georgie’s Bake Shoppe and Cupcakery, has been selling custom cakes, pies, and cookies around Richmond for the last six years. The time had come for McDowell to move beyond his home-based operation to a dedicated kitchen space. For him, the Bearded Kitchen was an obvious fit, with a reasonable monthly rate and all the counter space he could ever want.

Daniel Graff says that tenants like McDowell help shape what the shared space will eventually become. And here, the emphasis is on the word ‘shared.’ “What we’re trying to build here is a team-oriented kind of atmosphere where we’re considerate of everyone’s needs.” Daniel, who acts as the de facto kitchen manager, says the team plans to offer concierge services including dishwashing, laundry, and down the road, even prep work. Space is available hourly, starting at $20/hour and based on usage, and monthly for $500/month, plus a share of the utilities.

Brian Graff adds, “We feel like there’s too much nickel-and-diming of people who are new to the business and sometimes have never been in the business before.” With 15 years in the restaurant biz under his belt, Graff points out that first-time food business owners “don’t know some of these small nuanced things.” So part of the Bearded Kitchen’s mission is to try to help interested parties learn those very things without bleeding them dry along the way. One way the ServSafe-certified industry vet does that is by giving kitchen users a crash course in food safety basics, such as food storage and handling techniques, when they sign on to use the kitchen. “We have a great relationship with the Virginia Department of Health. They were very upfront from the beginning about the entire space. Even though we have separate areas, if one person fails, we all fail.” Dave Ruble says that the inspection process is very straightforward for both VDH, which inspects vendors as well as Virginia Department of Agriculture and Consumer Services, which covers producers. VDACS inspector Sean Hejja oversees the area of Richmond that includes the Bearded Kitchen. According to Ruble, Hejja’s feeling was that as long as the Kitchen meets the basic requirements, VDACS was ready to let people operate there. “[Hejja said] ‘Send us your operations packet, let us take a look at it and make sure it matches the equipment, and then have at it.'”

WASTE NOT, WANT NOT

With multiple businesses operating out of a single space, you might imagine that the level of waste output would be high. Visions of overflowing dumpsters, loaded with soggy 100-pound garbage bags come to mind. But that’s not the case at the Bearded Kitchen. Lessening the waste output is a major priority among the owners.

Daniel explains, “We want to have everybody that comes in here be aware of what waste they’re generating.” Each kitchen user starts their production time by grabbing a cart with buckets for compostable material, paper and cardboard, glass, and cans. Daniel takes care of the recycling, and a gardener/beekeeper friend comes to collect the compostables. “Ever since we’ve started doing this,” says Brian. “We’ve had very little actual trash. We barely fill up one trash can a week…We feel like it’s the right thing to do.”

In the spring, the Bearded Kitchen will reap the rewards in compost, which they plan to use for container gardens and possibly a rooftop garden, pending approval. Brian already grows tomatoes and peppers in a “salsa garden” that he uses for Galactic Tacos. He says he’d like to see that expand even further, including a partnership with friends at Sweet, Sour, Salty & Co.

While the tone at the Bearded Kitchen is idyllic, almost utopian, the trio acknowledges that there are hurdles to overcome. “The two things that we quickly realized we need to figure out or get are refrigeration and better safety,” says Brian. A cold-press juice operator needed walk-in space, but the Bearded Kitchen offers primarily residential-grade refrigerated space, making it a poor fit for her. While a barbecue outfit felt that the location may be unsafe for their overnight smoking projects. The team has been proactive about facing these challenges, installing security cameras in the next few weeks and actively seeking refrigeration solutions to meet the needs of future tenants.

“We’ve been open coming up on two years, but a lot of that time has been spent saving money and putting work into the building,” says Daniel. “We’ve still got a little more prettying up to do. Some of the finer tuning stuff of what we want to offer tenants we don’t have nailed down yet; but we like input. We try to be very adaptable to our tenants’ needs.”

For more information and to see some sweet photos of beardnets, call 804.366.4033 or send them a message on Facebook.