Weather Dan takes a look back at what happened – and what didn’t – during the 2010 hurricane season.

Take a second, and think about your perception of this past hurricane season. Did you follow each storm, tracking them across the Atlantic? Did you pay attention when you saw new satellite imagery on the evening news or the Weather Channel? Did you think this was a busy year? A quiet one?

Now that you’ve got an idea in your head, sit back, and watch this video. NASA has taken satellite imagery taken by the GOES (Geostationary Orbiting Earth Satellites) satellite fleet over the course of the entire hurricane season.

Several organizations issued forecasts for the number of named storms, hurricanes, and major hurricanes prior to the start of the season. A major hurricane is considered to be one that attains Category 3 or higher status on the Saffir-Simpson Hurricane Wind Scale.

Accuweather’s Joe Bastardi, Expert Senior Meteorologist and holder of several other mantles at the Pennsylvania-based company, called for 16 to 18 named storms in the Atlantic basin. While Bastardi did not break down this number into the number of hurricanes and major hurricanes expected, he did forecast a total of seven landfalling tropical systems, with five of these being hurricanes and two to three of those being major hurricanes.

On June 21, three weeks into the season, Bastardi revised his forecast to 18 to 21 named storms, with eight landfalls, and five to six of those being hurricanes. His total for landfalling major hurricanes (two to three) did not change. Bastardi’s forecast also included a confusing graphic, which seems to be intended to display storm tracks per arbitrarily-defined region of the Atlantic basin. I’m still not entirely sure of the meaning. 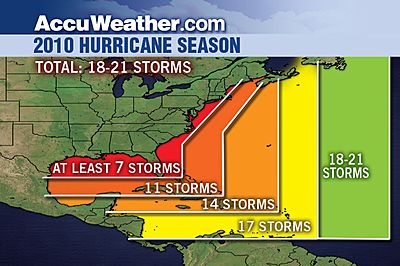 At Colorado State University, the Tropical Meteorology Project is led by Drs. Philip Klotzbach and William Gray. Their Atlantic Hurricane Season forecast called for 15 named storms, eight hurricanes, and four major hurricanes. If you’re interested, you can read their entire 43-page forecast (PDF), which details their methodology, the potential influence of El Nino and atmospheric carbon dioxide, and verification statistics for previous years’ forecasts. Due to a change in ocean and atmospheric conditions, Klotzbach and Gray issued an update to their forecast on June 2, increasing their forecast to 18 named storms, 10 hurricanes, and five major hurricanes.

An organization based in the United Kingdom named Tropical Storm Risk (TSR) also issued a pre-season hurricane forecast. Their forecast is a probabilistic one, assigning percentages to the chances for either an above-normal, normal, or below-normal hurricane season. A “normal” hurricane season is defined by the 1950-2009 average for named storms, hurricanes, and major hurricanes: 10, six, and three, respectively. This year, TSR assigned a 77% chance of an above-normal hurricane season season; specifically, they called for 16 named storms, eight hurricanes and four major hurricanes. There was only an 18 percent probability of a normal season, and a five percent chance of one below normal.

Unlike the forecasts from Accuweather and Colorado State, which were issued in early April, TSR’s forecast was issued on May 25th, just six days prior to the start of the season. On June 4th, a little more than a week later, TSR upped their probability for an above-average season to 80%.

Two days after TSR issued their forecast, the Climate Prediction Center, a division of the National Oceanic and Atmospheric Administration (NOAA), issued its own forecast for the season. The CPC’s forecast was slightly more generous than those issued by other organizations, predicting a 70% probability of seeing between 14 to 23 named storms, eight to 14 hurricanes and three to seven major hurricanes.

Here’s how each of the forecasts stacked up compared to what we actually saw in the Atlantic basin this past season.

2010’s nineteen named storms ties it with the 1995 season for third-busiest of all time, behind only 2005 (28 named storms) and 1933 (21). What’s really significant, along with the quantity of storms this past season, is that only one of them made landfall. Tropical Storm Bonnie made landfall as a weak tropical storm near Elliot Key, Florida, roughly due east of Homestead. This means that the last tropical cyclone of hurricane strength to make landfall along the United States coast was Hurricane Ike, in September 2008. The last break of this length was between the 1999 and 2002 seasons, when no hurricanes made landfall in either 2000 or 2001. If (and this is a really BIG if) no hurricane-strength storms make landfall during the 2011 season, it would mark the longest stretch with no landfalls since the period between 1861 and 1865, when no hurricanes came on shore for the 1862-1864 seasons. There’s a caveat here that the data prior to 1944 is incomplete, and so it’s possible that a storm made landfall during this period that nobody knew about.

Why was this such a busy season?

There are really two factors that contributed to making this such a busy hurricane season. The first was a feature that I’ve talked about before, the El Niño-Southern Oscillation (ENSO). By July 1, the sea surface temperatures off the coast of Peru had begun to transition from a mostly neutral state (compared to the long-term average temperature) to colder than average, signaling the beginning of a La Niña phase. These changes in sea surface temperatures also cause changes in the global circulation patterns, reducing the amount of vertical wind shear (the change in wind speed or direction with height) over the main Atlantic hurricane development region. During El Niño years, high wind shear values can essentially rip a developing tropical cyclone apart as it forms. These lower wind shear values during La Niña years also allow systems to develop closer to the African coast, meaning that they spend more time over open water, and intensifying more than might be expected otherwise.

Some researchers have pointed out that it’s not so much the influence of La Nina that drives tropical cyclone development; rather, it’s the lack of the wind shear that comes with a moderate or strong El Niño phase, which actively inhibits tropical cyclogenesis.

A look at 2010’s hurricane tracking chart paints this picture quite well.

The other factor that contributes significantly to increased tropical cyclone development is the sea surface temperatures for the Atlantic Ocean, Caribbean Sea, and Gulf of Mexico. Tropical cyclones thrive on the heat released by the condensation of water in the atmosphere. Hurricanes need water temperatures in excess of 25C (77F) in order to develop. As this satellite image from August 1st shows us, while the blue tongue of cooler temperatures extending west from the northern coast of Peru deep into the equatorial Pacific Ocean, sea surface temperatures across most of the equatorial Atlantic were well in excess of 80 degrees, providing plenty of heat to sustain developing and rapidly intensifying tropical cyclones.

Ultimately, it was the combination of these two factors – the lack of an El Niño, and very warm Atlantic sea surface temperatures – that contributed to an active 2010 Atlantic hurricane season.

Think back again to the video. How would you describe the hurricane season now?

Have a question about weather or weather-related phenomena? Submit it to Dan at dan@rvanews.com.