Travis Croxton is helping replenish the Chesapeake Bay oyster and revitalizing RVA’s downtown dining scene…with the help of a milkshake. One of the best kept secrets in the life of Travis Croxton–who helped resuscitate Chesapeake Bay oyster production before opening four restaurants, including Rappahannock in downtown Richmond–is the Reese’s Peanut Butter milkshake he routinely buys at the Steak & Shake off I-95 exit 126.

Croxton, named one of Zagat’s 24 Restaurant-World Power Players Around the U.S. last year, regularly travels to D.C. to visit the restaurants he owns in the Nation’s Capital: Rappahannock Oyster Bar (co-owned by his cousin, Ryan) and Eat the Rich. Croxton leaves for D.C. (at least once a week) around 9:00 AM, typically spending the night before returning home, sometimes in the late evening.

“I’m not as young as I was, so driving home late at night is not as easy as it was,” Croxton said at the bar of his Richmond restaurant. “If I’m getting tired, I’ll pull in [to Steak & Shake] and I get this peanut butter cup milkshake because sucking the peanut butter cups through the straw keeps you wide awake for the whole ride home.”

Milkshakes may ensure his safe passage on the interstate, but Croxton’s an oyster man at heart. In 2001, both he and Ryan inherited their grandfather’s oyster farm on the Rappahannock River. Despite their grandfather’s warnings against the idea, the cousins took on the family business lacking any knowledge or experience in the art of oystering. Wading through unfamiliar waters would become a regular feat for the cousins. “You always have to go outside your comfort level,” Croxton says.

Their ambitions extended past simply oyster farming. “It was about putting the Chesapeake Bay oyster back on the map, because it was nowhere to be found,” Croxton said. “State officials told us you could never have a commercially viable aquaculture business…Everyone told us you can’t do this here, and we fought against that,” he said. “We did what our hearts told us.” 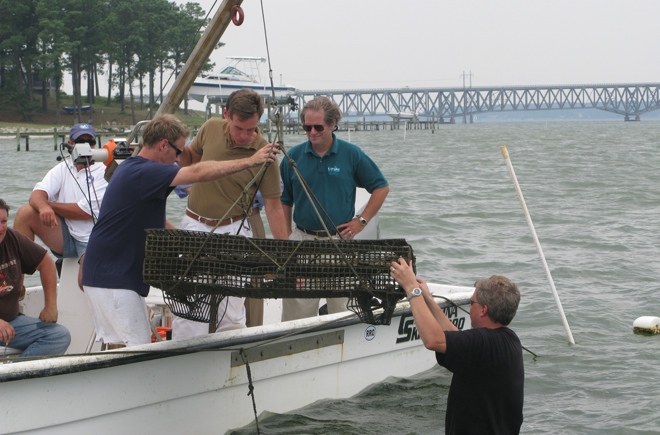 The Croxtons went beyond their comfort level again in 2011 to open their first restaurant, Merroir,2 on the banks of the Rapphannock River in Topping, VA. Merroir wasn’t the realization of some lifelong dream to own a restaurant. “We didn’t have dreams of that,” Croxton said. “It was more in terms of wanting to be able to talk directly with our consumers” and “promote the region.”

Later, the Croxton’s surpassed their comfort level yet again to open their second restaurant, Rappahannock Oyster Bar in D.C. Not long after that, the 99-seat Rappahannock opened on Grace Street in downtown RVA, surpassing another level of comfort with a third restaurant. Most recently, Travis Croxton helped opened his fourth restaurant, Eat the Rich and fifth, Southern Efficiency, in D.C.

Their restaurants give the cousins a unique perspective when comparing the D.C. and RVA dining scenes.

“I think the easiest one to identify is just the fact that D.C. is all basically downtown dining,” Croxton said. “You have your different neighborhoods, but everything is kind of ‘city’ dining.” He said that layout has fostered a tight-knit community of food aficionados. There’s definitely a stronger “foodie” contingent in D.C. compared to Richmond, he said.

One of the reasons for that is that older generations of Richmonders are more “conditioned to chain restaurants in the West End.” But Croxton said that, in recent years, restaurants like Comfort, Pasture, and others have helped recondition Richmonders to dine downtown, laying the foundations of a discernible dining community.

West End residents are even forgoing their nearby restaurants with convenient parking to visit Rappahannock. “Just seeing the number of people driving from the West End to come eat here…I mean, that’s a commitment,” Croxton said.

Just as he and his cousin used their oyster farm to revitalize the Chesapeake Bay’s oyster population, the Croxtons want Rappahannock to help revitalize Richmond’s downtown. The restaurant (along with Pasture, 525 at the Berry Burk, Richmond on Broad, Gibson’s Grill, and others) is surrounded by residential and business development that, when filled, may help further cultivate a downtown community. “I think once we saturate downtown, and all these apartments and condos get moved into, three to five years or so, it might be vibrant in downtown again,” Croxton said.

And what about the city’s restaurant culture overall? Croxton believes that restaurants must not see each other as competition. “The more great restaurants we have, the better it will be for everybody,” he said. He’s even open to helping out-of-town restaurant owners and chefs set up shop in RVA.

A hefty challenge facing local restaurants is the relatively small number of skilled cooks. “If you ask any chef in town what’s their major issue or worry, it’s resources,” Croxton said. A lack of skilled kitchen staff hinders both existing restaurants and fledgling ones, and thus the city’s dining scene overall. Croxton said a leading culinary institute in Richmond could help inject many quality cooks into the city.

The gradual growth of the Croxton’s oyster and restaurant businesses may seem calculated, but it wasn’t designed that way. “We didn’t follow a blueprint to success,” Croxton said. “It was kind of evolutionary. We did what our hearts told us and had a lot of luck and help along the way.”

While the Croxton’s may have ignored a traditional blueprint, they’ve effectively created their own: built on passion, team building, partnerships, and mission.

But wanting to become wealthy isn’t the Croxton goal. From reviving Virginia’s oyster population with their farm, showcasing its nearby region with Merroir, and helping to build a vibrant community in Richmond’s downtown–as well as putting Richmond on the national dining map–the Croxton’s build businesses around what they think is right. Success merely follows.