Raising Richmond: What I learned at the zoo

Last week I joined my son’s preschool class for a field trip to the Metro Richmond Zoo. As a former educator, I’m no stranger to field trips…but this was my first time experiencing things from “the other side”. Last week I joined my son, JR, and his preschool class for a field trip to the Metro Richmond Zoo. Now, I’d like to point out that I (*brushes off shoulders, engages in various preening behavior*) am no stranger to field trips. As a former fifth grade teacher I’ve experienced the challenge that is venturing out into the world with a group of children who are so excited to not be in school that you start to wonder if they’ve ever been anywhere before.

For those of you who’ve never been in charge of a field trip, it involves a lot of repressed panic as you try to not lose other people’s children and significant amounts of hissing and verbally wrangling your students through clenched teeth. Don’t get me wrong, fun happens…but it’s always served up right alongside heaping helpings of stress and anxiety.

Now that my teaching days are behind me, I looked forward to experiencing a field trip from the other side, if you will. As a parent on this trip, it was basically my job to just help secure the perimeter around this surging mass of preschoolers slowly making its way through the zoo. I was no longer the teacher who had to spend the majority of the morning muttering “1-2-3-4-5…” as I constantly counted the children in my care, my eyes darting back and forth over the group with each step we took. Instead, I got to be more of an observer–to really sit back and learn about the world that is preschool and just watch these kids do their collective thing.

Here’s what stuck out most to me…

You’ve got your hall monitors and your bolters.

As soon as the kids piled off the bus, JR’s teacher got right to business assigning field trip buddies. JR paired up with a friend of his—a little boy who is hilarious and sweet and…well…spirited. Before we started moving, the teacher reminded the kids that everyone was responsible for his or her buddy; they were to hold hands and not lose each other.

Those instructions were what separated the “hall monitors” from the “bolters.”

The hall monitors (my son, included) spent most of the trip chasing after their buddies, demanding that they hold hands and “STOP CLIMBING DAT STUFF, OK?” JR added in the occasional, “YOU’RE MAKIN’ ME SO MAD MY HEAD IS GONNA ‘SPLODE”, just for good measure.1

Meanwhile, the bolters made it their missions to shake of their buddies, separate themselves from the group entirely, and wind up in situations that required first aid and/or an entirely new sets of clothes. And what really impressed me were the bolters who got paired up with the teacher; those kids took it to the next level. One actually managed to sneak on to the merry-go-round, swipe a snack from a cooler that didn’t even belong to our group, and lose her shoe in the giraffe pen within the first 30 minutes of the trip.

I’m not usually one to generalize–and I realize I’m insulting my own son by making that statement—but GOOD GRAVY, y’all. In the three hours I spent with these tiny gentlemen,2 I’d say two hours and 57 minutes of it revolved around the subject of poop: jokes about poop, questions about poop, pointing out poop, requesting to poop, and so on. The three remaining minutes were used up by the adults pleading with the boys to not lick the fence and no you may NOT go barefoot in the public bathroom and don’t you DARE stick your finger in that tortoise’s face oh for the love of God WHAT did you just put in your MOUTH?

When kids don’t want something, they really don’t want it…unless they want it.

Apparently children age three to four have relationships with puddles that can only be described as “complicated.” Should a child step into a puddle accidentally, the world is over—at least judging by the wailing and teeth gnashing that ensue. Slightly damp socks must be replaced immediately and the afflicted child must be carried for the next half-mile (minimum) to give him enough time to fully recover from The Trauma.

But! Should the child initiate contact with the puddle—an interaction that is surely to leave him significantly wetter and dirtier than the accidental interaction ever would—everything is totally fine. The only wailing and teeth gnashing you’ll see is when you attempt to separate the child from his beloved puddle and replace his soaking wet socks with a pair that is not saturated with zoo animal runoff.

(Similar “logic” applies to water consumption and the wearing of sunscreen and/or hats and sunglasses.)

The “cardboard box reaction” applies in all situations.

You all know how this works. You scrimp and save to purchase the perfect gift to celebrate your child’s birthday—a gift you’re certain he will love and cherish. And he will…for approximately 35 seconds. Then he’ll inevitably clap eyes on the cardboard box the present came in and be all, “What present? I know nothing of this present of which you speak. But have you seen this boat-TV-racecar-spaceship-airplane-bee-keeper’s-helmet I have here that you could’ve gotten for free at the grocery store?”

There we were, standing yards away from a crash3 of rhinos. Suddenly a young gazelle sprinted across the open field, catching the gaze of a curious, young zebra. The adults were captivated–even a little breathless.

Meanwhile our kids couldn’t tear their eyes (or hands…or tongues) away from the damn Powerade machine just down the path. The same thing happened minutes later when they had the opportunity to feed real, live giraffes. Over an identical Powerade machine. God’s most majestic creatures right at their fingertips? Totes boring. But a vending machine? With buttons? Preschoolers’ minds say, “ZOMG WHAHHHHHH?!?!?”

As we all know, part of the fun of field trips is getting to eat lunch somewhere other than the regular old cafeteria. So our last task that day was to set the now totally exhausted kids up at a picnic table so they could eat before passing out, faces first, into their teeny, tiny boxed lunches.

After opening a dozen milk cartons4 and rationing out handfuls of apple cinnamon rice cakes to our hungry, squalling squad, I flopped down at a nearby table with a sigh. My son’s teacher sat down next to me—also with a sigh—and peered out at the group.

“Having one can be pretty exhausting for me, “ I said, assuming she was as wiped out as I was. “I can’t imagine being with 12 of them all day, almost every day.”

“Oh but they are always so much fun!” she exclaimed.

I didn’t sense any edge or sarcasm in her voice, so I looked over at her to make sure.

Well, except for the tears.

ACTUAL TEARS glistened in her eyes as she told me about how she loves what she does—taking care of these sweet children, watching them grow, helping them learn to be kind and helpful. Then she popped up and joyfully headed back into the fray. Meanwhile, the other chaperones and I—you know, the ones who don’t spend 40 hours a week caring for other people’s prayshus snowflakes—kept our exhausted asses on the sidelines until lunchtime was over.

JR slept the full 30 minutes it took to get back from the zoo that morning. Then he took almost a four-hour nap that afternoon, followed by 12 hours of sleep that night and another epic nap the next day. From what I hear, the rest of the kids in the class did pretty much the same thing.

As for me, the trip was last Wednesday and it took me until Saturday evening to get back to 100 percent. The heat, the walking, and the unbridled energy of a pack of preschoolers wore me out in a way that I never could have anticipated.

But at least I know what expect for the next field trip, so I’ll be able to prep for it—you know, a little extra sleep the night before, some protein-packed snacks for myself tucked away in my backpack. Or I could just save us all some time and exhaustion and suggest we let the kids into the teachers lounge to play with the vending machines and call it a day.

Watching your kid hang out with his buds is pretty cute. 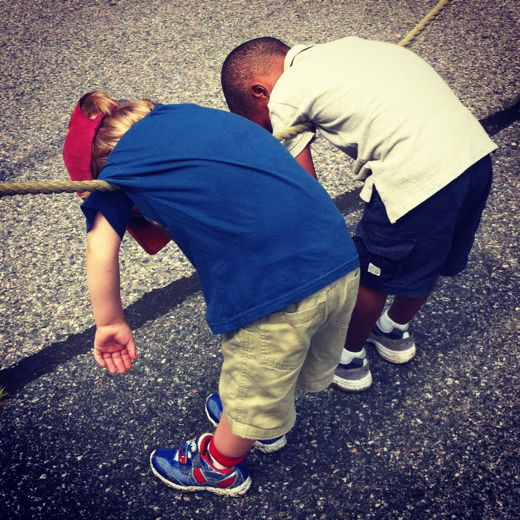