You know what they say: ‘Tis the season to remind your kids how good they’ve got it! OK no one says that, but they damn well should. Something’s rotten in the House of Catrow.

Although to be fair to our sweet boy—and he is quite sweet most of the time—this “spoiled-ness” tends to stay confined to one part of the year. A “spoiled season,” if you will. While I’m sure my husband and I are partly responsible for this,1 I can’t help but heap most of the blame on the circumstances of his birth.

JR is our only child. He’s also the sole grandchild on both sides of the family—and as my parents are divorced and have both since remarried, the kid has three (count ‘em three!) sets of lovely, doting grandparents.2 On top of all of that, JR’s birthday sits right in the middle of that consumeriffic stretch between Halloween and Christmas. So what with holiday events, class parties, family get-togethers, and general revelry, he spends almost two solid months each year on the receiving end of a steady stream of candy, presents, and pretty much every form of indulgence you can imagine.

With JR’s fourth birthday3 just two weeks away, we’re right in the thick of it as he works through a particularly nasty case of The Gimmies.4

Meanwhile I’m this close to boxing up every last Spider-man figurine, Melissa & Doug train track, and Hot Wheels car and dropping them off at Goodwill. While he watches.

I know, I sound horrible—and probably very ungrateful. But really it’s the opposite.

My husband and I understand what a blessing it is to have people in our lives who are so deeply invested5 in our child. This kid is loved to bitty-bits, and their incredible generosity provides JR with many things (both material and experiential) that we just aren’t in the position to give him. We are so, so, SO grateful for—and humbled by—what we’ve been given.

Our son? Not so much.

Like a lot of kids his age, JR is very into “stuff”—stuff he has, stuff he wants, stuff other people have that he wants—without giving much thought to where this stuff comes from or the sentiments motivating the person giving it to him. And, also true to preschooler form, the more JR gets the more JR wants. So you can imagine that this time of year, as the getting increases, so does the wanting…and the pouting…and the melting of my brain with the whining.

While it’s somewhat expected for a kid JR’s age to behave this way, I don’t want us to use that as an excuse to blow it off. The way I see it, the point of no return approaches just as swiftly as that fourth birthday. If we don’t actively work to solidify JR’s grasp of gratitude now—for things both tangible and not–I fear we’ll end up fighting some serious feelings of entitlement down the road.

We’ve always modeled and expected good manners in our house, and JR typically says “please” and “thank you” with minimal prodding. However, now that he’s older, we need to go deeper than that. Why do we say “thank you”? What does “thank you” mean for him? What is he thankful for?

I used that last question as the jumping off point in our attempts to counteract The Gimmies with a heaping dose of gratitude. In helping JR figure out what he’s thankful for, we’re setting up opportunities to talk with him about what thankfulness means, what it can look like, and why it’s important.

To do this, I decided to build on a Thanksgiving activity we actually used with JR last year: a thankfulness tree. Each day last November, he told us one or two things for which he was thankful. We’d write his adorable answers6 out on tags which he could then hang on his little tree—which was really a bunch of branches haphazardly arranged in a Mason jar filled with birdseed. But while 2011’s tree was just a cute little something to celebrate the Thanksgiving season, I wanted this year’s edition to be taken more seriously…by JR and by us.

An early buy-in is key in holding this kid’s attention for a long(ish)-term activity, so I knew JR needed to feel involved every step of the way. He picked out everything: our tree’s flowerpot and the stickers to decorate it, the branches from our yard, even the pen we’d use to fill out each tag. 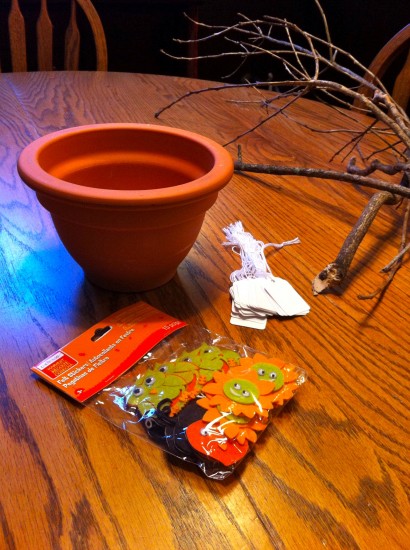 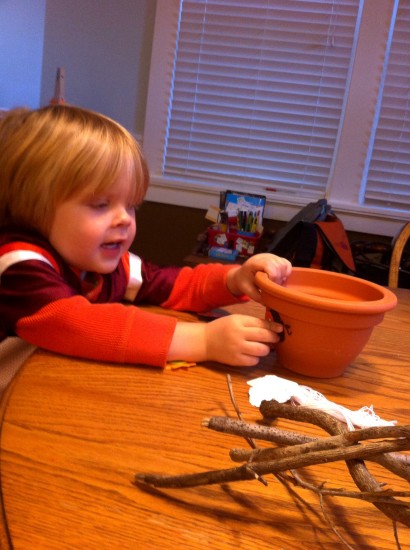 We worked together to assemble our tree; he decorated the flowerpot while I ripped my fingers to shreds arranging the branches in the Styrofoam ball we’d picked up to hold everything in place.7

Once we added a few pieces of burlap8 to pretty things up/conceal my questionable construction choices, we were ready to roll.

As I expected, JR immediately wanted to fill up the tree with tags naming each and every one of his most beloved toys–much like what he did last year. While it’s obviously not bad that he’s thankful for those things, I wanted to encourage him to think beyond the “stuff” this time around. So with each mention of an object, we talked about where he got it, who gave it to him, or who he enjoys sharing it with. Eventually a tag about Legos focused on Henry, his favorite building buddy. A shout-out to his new Star Wars book also paid tribute to his grandmother who, as he put it, “Got me the book so I would be smart and know about how to be a Jedi.” 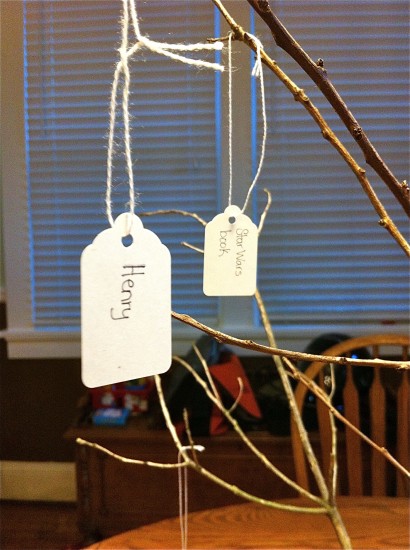 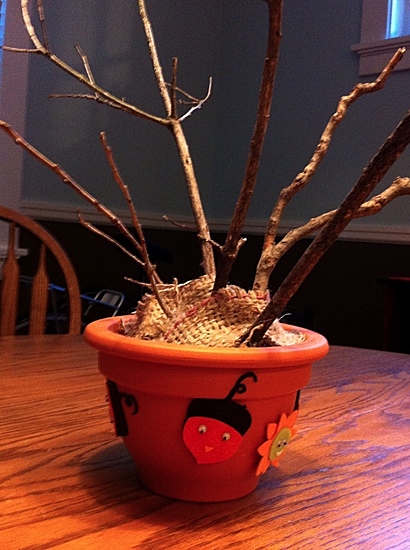 Even just a few days into filling up our thankfulness tree, JR is getting it—slowly but surely. On Sunday, after returning home from a trip to the playground with his friend Myles, JR asked if we could fill out his tag for the day.

“Ok, bud. What are you thankful for today?” I asked. I sat with my pen poised, certain he was going to come back with something like “when I have the slides to myself” or “playgrounds that have mulch and not sand.”9

“I’m thankful10 that I have Myles to be my friend and to play with me.”

“Aww, JR, that’s very sweet. We should definitely add that to our tree,” I said, totally beaming as I started filling out the tag.

“And I’m thankful that I’m bigger than him because that makes me his boss.”

How are you encouraging gratitude and thankfulness with your kids this time of year? Leave your ideas and inspiration in the comments.