The Children’s Museum of Richmond is officially opening the doors to its new branch out in Short Pump this Saturday, and the folks in charge asked yours truly (and a very cute associate) to come over and take a look.

The Children’s Museum of Richmond is officially opening the doors to its new branch out in Short Pump this Saturday, and the folks in charge asked yours truly (and a very cute associate) to come over and take a look. As this offer gave me 1) a chance to spend some extra quality time with my kid and 2) the opportunity to also give you all a sneak peek, I jumped at the chance. 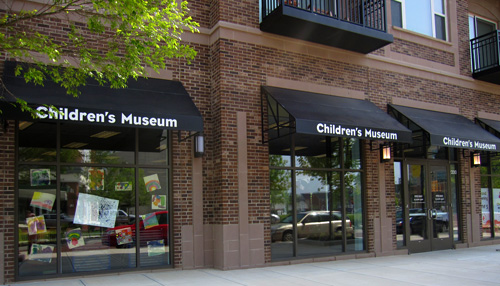 With JR (my 18-month-old) in tow, I arrived at the new Short Pump digs to find the staff busy prepping for the second half of their two-day member preview. According to Katy Holder, Director of Operations for the new branch, day one saw a great turnout, and the members seemed very excited.

Karen Coltrane, Chief Executive Officer of the Children’s Museum, was vacuuming out a play area when we walked in — it was clearly “all hands on deck” to get things in tip-top shape — but JR and I managed to pull her away from the grunt work to chat with us for a bit before we got acquainted with the new facility.

According to Coltrane, the decision to open a new branch of CMoR came about when they were assessing how they could better serve families in the Richmond area.

“Ninety-eight percent of the families we talked to with kids age eight and younger knew who we were, and 90 percent had been at least once and thought highly or very highly of what CMoR was doing,” said Coltrane. “So then we asked them, ‘Why don’t you come more often?'”

The number one response: convenience.

While the Children’s Museum of Richmond – Central (as it’s now being called) sees about 230,000 visitors per year, its location isn’t currently meeting the needs of families coming in from the surrounding counties; making a 20 or 30-minute trip into the city just wasn’t something they were willing to do if they had other options closer to home. And while the one-off visits are nice, Coltrane emphasized the impact of making CMoR’s educational opportunities part of your child’s routine.

“We know that the kids coming regularly is so important developmentally… repetition causes mastery,” she explained.

When the time came to explore branching out, Coltrane and her staff took it to the streets… literally.

“We looked at traffic patterns and we saw that with 288 there seems to be a confluence of people who spend part of their day [in Short Pump]. Chesterfield seems to come across the river to Henrico, but Henrico doesn’t seem to go across the river to Chesterfield. And, quite frankly, the space was here and easy, and Henrico was very welcoming of us being out here. So it all just kind of fell into place.”

According to Coltrane, the Children Museum’s Board approved the expansion strategy just this past October. That means the entire process — from bringing it to the table for discussion to opening the doors to members — only took around eight months. Opening the 15,500 square-foot space cost between $250,000 and $300,000, the majority of which was provided by the first donor Coltrane approach in the fundraising process.

“That was good October,” she said with a laugh.

While CMoR – Short Pump’s proximity to 288 and 64 make it convenient, the fact that it’s located in West Broad Village (the same shopping center as Whole Foods) just across Broad Street from Short Pump Town Center makes it downright irresistible to busy parents trying to make each day with their kids and as fun and efficient as possible. And, get this: members will actually have the option of patronizing nearby businesses child-free.

Yes, you read that correctly.

CMoR – Short Pump will be offering Stay and Play, a program in which members can drop their children (toilet-trained and older) off at the museum for three hours so the kids can experience educational fun and the parents can tend to the business of everyday life. Kids will be broken up by age group to take part in art lessons, literacy work, and time on the museum floor with CMoR staff. The estimated cost for Stay and Play is in the $25 range, and slots will be available Monday through Friday.

As far as what to expect from the new branch, Coltrane points out that visitors will probably find more similarities than differences, particularly regarding their shared focus on art education (the Short Pump location sports a 1,000 square-foot art studio). However, one major distinction is CMoR – Short Pump’s “storybook” theme.

“We went with a storybook theme because art and literacy is sort of who we are as an organization.”

Like CMoR – Central, the Short Pump branch includes activities great for little ones of all ages, but here you’ll find references to favorite characters from nursery rhymes, children’s books, or just images that tend to come up when kids are using their imaginations.

Their designated “crawler” (and, on this specific visit, “curious toddler”) area is decorated with images of Humpty Dumpty and Mary, Mary, Quite Contrary, and surrounded by a low wall that parents can sit on and have a clear view of the rest of the museum, should they have older children with them, as well.

Bigger kids (with parents not afraid of a little mess) will go ga-ga over the sand pit where they can dig for buried treasure — that is, when they’re not busy on… 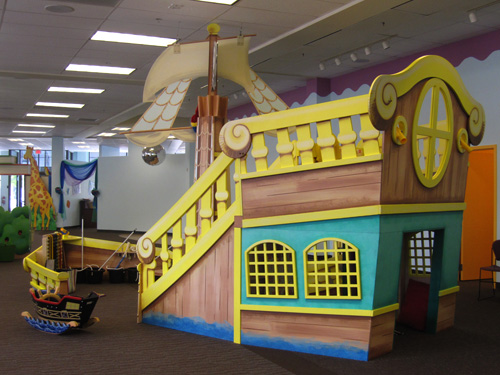 I must say, they pulled out all the stops with this one: a pirate flag, parrot, telescope, and even buckets and mops so your wee scallywags can swab the deck. JR got so excited when he saw it he took off across the room… and promptly face-planted on the carpet, splitting his lip. After a quick trip to the bathroom to clean up, he immediately marched back over to the ship so he could stand and point at the parrot, filling the room with shouts of “BIRD? CHEEP CHEEP?” If that’s not a Toddler Seal of Approval, I don’t know what is.

Both the pirate ship and the nearby “Enchanted Castle” highlight CMoR’s support of dramatic, imaginative play.

“We offer a lot of dramatic play, which we love, to inspire in kids because that’s where they work through everything,” said Coltrane. “We don’t want to totally prescribe the play, but we want to give them enough to get them going, and hopefully Mom and Dad will join in.”

One touch that didn’t go unnoticed (or unappreciated) by me or JR was that seemingly every nook and cranny of CMoR – Short Pump is filled with books, books, and more books.

“The more books are part of children’s experiences, we believe, the better off they’ll be in life,” said Coltrane.

The staff’s desire to create such a complete experience for kids is also evident in the Safari Train, the CMoR – Short Pump attraction that will likely send your kids over the edge (in the best possible way). While the train is there as something extra special and fun for the kids, its set-up is very intentional, like everything else at the museum.

“It’s the beginning of something exciting to do, but you have to wait for it,” said Coltrane, referring to how young visitors will likely have to stand in line before boarding. “You have to follow simple rules, and beginning to follow rules in a group gives you what you need to be successful in school.”

It’s that focus on combining fun with something meaningful that has earned CMoR – Central the highest attendance of any children’s museum in Virginia. I have no doubt that the new Short Pump branch will rank right up there, too.

Judging from this face, I’d say JR agrees, busted lip and all: 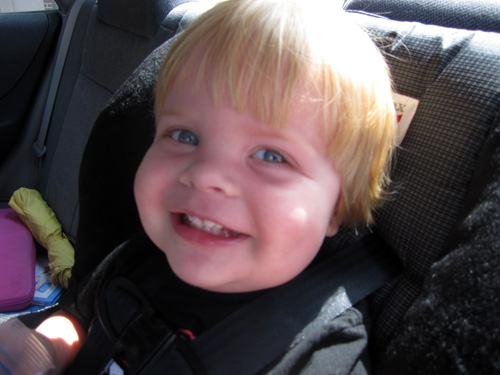 The Children’s Museum – Short Pump (located at 2200 Old Brick Road) opens to the public this Saturday, June 5 from 10am to 4pm. The opening celebration will include face painting, balloon giveaways, and kids will have the chance to create artwork with local artists Matt Lively and Ed Trask. Admission is $8; members and kids under 1 are free.