Four things I learned about my son during Richmond’s latest SNOMG. When I saw those big, sloppy snowflakes tumbling down from the sky Sunday evening, I had one thought:

I might as well out myself as a Snow Scrooge right now. I just kind of…hate it? Sure it’s pretty to look at it, but it’s also cold and wet and can knock out electricity and, for some reason, makes people really, really dumb. I’m sorry, I’m just not a fan. Even when its presence is seasonally appropriate, snow makes me all twitchy and grumbly,1 so you can imagine how I felt about the surprise appearance it made here in Richmond on FRIGGIN’ MARCH TWENTY-FOURTH.

And when an email popped up in my inbox announcing that our son JR’s school would be closed on Monday? It’s possible I slid to the floor and whimpered “no” over and over again, imagining what was SURE to be a day spent switching off between 1) being stuck outside in the snow (read: miserable) and 2) being stuck inside with a kid who wants to go back outside even though he was JUST OUT THERE 20 minutes prior whining about how he wanted to go back in (read: also miserable, but now with a melted brain, what with the whining).

As you can imagine, I wasn’t particularly stoked to start the day.

But start the day I did (eventually). What’s more, as I noticed the snow starting to melt a bit, I even initiated our first venture outside so the kid wouldn’t miss out on, you know, creating childhood memories and all that jazz. So we bundled up and shuffled out into the wintry “wonderland” in our front yard.

It was cold. It was windy. It was mushy. It also wasn’t totally horrible.

JR’s only seen snow a handful of times in his four years on this planet, and he’s just recently gotten big enough to actually go outside and enjoy it.2 For him, snow is still a novel experience that he can’t help but greet with such glee, such uninhibited joy, that even a snow-hater like me can appreciate the chance to witness it. And as someone who is with this child almost all day, almost every day–as someone who knows him inside-outside-upside-down–I found it refreshing to watch him explore a new(ish)-to-us situation. In fact, our time outside together revealed some interesting, adorable, and pretty hilarious things about JR that otherwise probably would’ve gone unnoticed…

1. He treats his Mama right.

Before heading out the door, JR asked why I was wrapping my feet in plastic bags before slipping them into my boots. When I explained to him that my boots are old and don’t keep the water out so well, he simply bellowed back, “Mine do!” and galloped out the door. When I met him outside, JR wouldn’t let me walk down our porch steps until he stomped them clean with his own waterproof boots. He also made sure to “test out” all puddles and deeper patches of snow to make sure they were safe for me to walk through with my “less good” boots.

2. He is impervious to cold.

Either that or he loves snow too much to care. He cast off his gloves minutes after we stepped outside because apparently they “just get in the way,” and spent upwards of 45 minutes (save a couple chunks of time when I insisted he put them on to avoid frostbite) making snowmen, throwing snowballs, and constructing “snowy mud pies for Mamaw and Papaw” with his bare hands. JR is typically the finnickiest of the finnicky, so I was stunned. I’m also now hopeful that this development means we’re that much closer to him putting on his shoes without repeated choruses of “MY SOCK FEELS WEIRD TO ME.”

3. He respects other people’s property.

Overall, JR is typically a well-mannered little gentleman, but, as is the case with most preschoolers, he doesn’t always grasp (or choose to grasp) the concept that some things just don’t belong to him. And yet as we made our way around the neighborhood, just checking out the sights, I realized that he would only stop to dig in the snow occupying the space between the sidewalk and the road–never the snow lying in the yards along our route. When I asked him why, he looked at me incredulously.

“Mama! I can’t touch that. That’s other people’s snow! What if they came out to play in it and it’s all gone? They’d be so sad!”

Because this is America, I was determined that we use at least some of our time outside to build a snowman. JR fought me on this at first (he was mostly interested in pelting me with snowballs3) but eventually relented and really threw himself into the process.

After painstakingly constructing the snowman’s body (with un-gloved hands) and carefully selecting just the right rocks to compose our wintry friend’s visage, JR first posed proudly with his finished product… 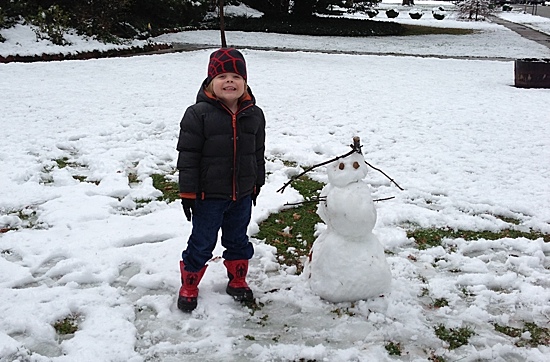 Then he kicked it. 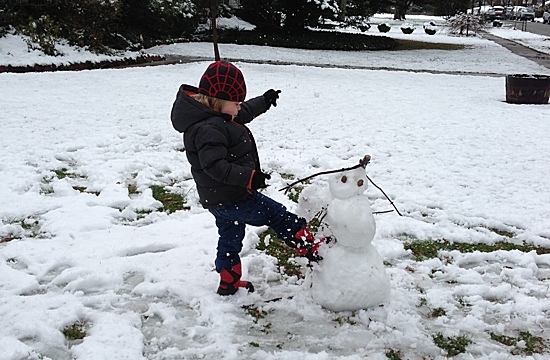 Finally, a tackle–you know, to really finish the job. 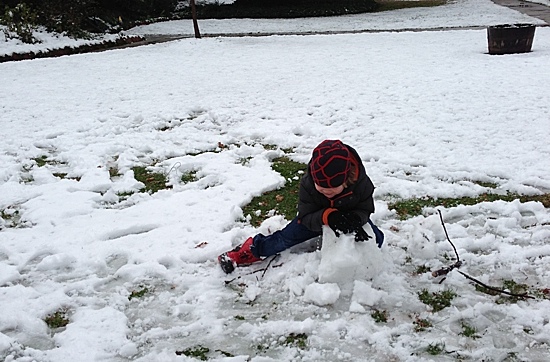 And then he did the same thing to three more poor, unfortunate snowmen before trotting off to smack our snow-covered trees with his t-ball bat.