We have this old, smelly, grumpy dog named Shooter who drives me crazy. But I dread the day when we’ll have to say goodbye to him. Note: Kelly is off this week, so I’m back in the Raising Richmond driver’s seat to fill in. Don’t worry though. She’ll be back next week, being all funny and stuff.

The day after Hurricane Isabelle hit Richmond in 2003, my husband and I left our apartment on Ellwood Avenue to go buy a gas can. We came home with a puppy.

You do things like that when you’re really young and somewhat stupid.

We named the puppy Shooter,1 and he’s been with us ever since.

For a long time we were “those people” about our dog. We spent a lot (like a lot) of time talking about handsome he was, our German Shepherd mix pup with his “beautiful black mask.”2 Shooter had his own pack to wear when we went GeoCaching. I took him with me on errands whenever possible. There also might’ve been a time when we were on a plane returning home from a week-long vacation in the Dominican Republic when I almost burst into tears because I wanted to see my dog already, but I’m not admitting anything.

When Shooter was two or three, we decided to add another dog to the family.3 Shooter had always been on the neurotic side–he has stress-induced seizures, for Pete’s sake–and since our lives were just getting busier and busier, it made sense to give him a buddy to hang out with/boss around. So we brought home a pretty hound mix we named Zapp.4 They both slept on our bed every night5 and were my little schmoopy goofy babies.

Then I had an actual baby, and suddenly their canine hijinks became much less endearing and much more reminiscent of a giant pain in my ass.

Don’t get me wrong; I still love them–very much, really. They’re sweet, always up for snuggling, and are (usually) pretty gentle with our son. But you know how you have certain family members who drive you absolutely insane? Like to the point where you’d never actively choose to spend time with them but will when called upon? It’s like that. I love them, but I have a hard time liking them most days.

I realize I sound horrible, And honestly, the shift in my attitude towards the dogs surprised me more than anybody. But, guys, they can be stunningly annoying–Shooter in particular.

Zapp’s quirks are a bit easier to deal with because they can be attributed to the fact that she’s really tall and skinny and kind of not smart. She likes to crawl under the fence and prance around in the alley until we drag her back into the yard, usually after Shooter rats her out by barking his fool head off. She runs into things on the regular. She’s been known to get her paws stuck inside of shoes and clomp around, all confused. She likes to eat stuff she’s not supposed to and then eat grass which makes her barf and then she eats more grass because dogs eat grass when they don’t feel good and, augh, trust me, she’s dumb. But I can forgive dumb.

What I cannot forgive is intentional buttheadedness, which Shooter really, really excels at. Some examples:

OK, I guess I can’t necessarily call this buttheadedness intentional, but it feels intentional–so much so that I basically view Shooter as my household nemesis who is determined to sabotage my every attempt to relax or just spend a few minutes not taking care of someone.

It’s a layered and complicated relationship. It’s made even more complicated when I remember that this dog is going to die someday, and I’m going to be really sad when it happens.

I took Shooter to vet back in January for his annual checkup. He needed his rabies vaccine and his prescription for his epilepsy medication requires us to get bloodwork done every six months. Shortly after we arrive, Shooter looked like this: 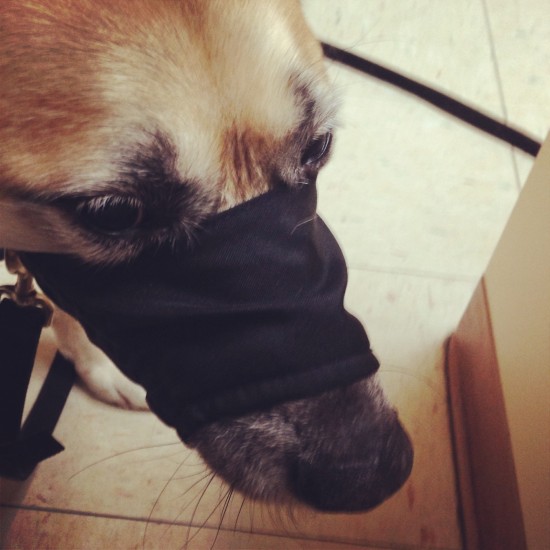 Because he is a rude and cranky old man.

He spent the remainder of the appointment slamming his face into my legs, trying to get the muzzle off of his face. That is, when he wasn’t alligator rolling every time the vet tried to examine him.

Once we got all the necessary procedures done-a process which left me and our vet sweaty and covered in dog hair-she gave his file a final skim.

“Well, he looks really good for his age and his size,” she said. “He’s probably got a couple more years left in him.”

I think she meant that as a good thing, but I was stunned. Because, apparently, it hadn’t yet occurred to me that Shooter is, in fact, not immortal.

“Oh. Well a couple years is good,” I stammered in reply.

We chatted a bit more about possibly increasing the dosage of his seizure medication, how to help him deal with his ever-deteriorating eyesight, what we can do to help his gross-disgusting breath, and what not. I mostly heard what she said, but as I walked out, I found myself kind of in a daze.

Holy shit, this dog is going to die one day. One day kind of soon.

I mean, I know I knew that, but it was the first time it really registered with me: if Shooter’s old, that means we’re old (meaning our marriage). When he goes, when we say goodbye to him, it’ll be like saying goodbye to that first iteration of us. He’s been with my husband and I for all but three months of our married life. New homes, new jobs, new family members–Shooter has gone through all of it with us, a bossy and smelly but constant and comforting presence in our lives for more than a decade.

Damn dog, instead of just making me crazy, you’re making me cry, too. I mean, if you leave us, how else are we going to know when the wind changes direction or when Zapp’s off being an idiot somewhere? This family still needs you, Old Man. And I’ll do whatever I can to help you stick around as long as possible.