Raising Richmond: Mozart for the moppets (sort of)

Fresh off its holiday production of Madeline’s Christmas, Virginia Repertory Theatre continues the 2012-2013 Children’s Theatre of Virginia Season with a kid-friendly take on a classical…well…classic. Fresh off its holiday production of Madeline’s Christmas, Virginia Repertory Theatre continues the 2012-2013 Children’s Theatre of Virginia Season with a kid-friendly take on a classical…well…classic.

First commissioned in 20061 to honor Wolfgang Amadeus Mozart’s 250th birthday, The Magic Flute is a fantastical adaptation of the composer’s comic (and final) opera by the same name. It tells the story of Tamino, a handsome young prince sent out by the Queen of the Night to save her daughter, the lovely (and smart and funny, as we’re repeatedly told2) Princess Pamina from the “evil” Zarastro—and to retrieve a very important and powerful medallion while he’s at it. Armed with only a magic flute and the help of his reluctant but clever companion, Papageno (the Queen’s bird catcher), Tamino quickly learns that things (and people) aren’t always what they seem as he faces many trials before he can bring his3 Pamina home.

Clocking in at just over an hour, The Magic Flute offers what amounts to a quick-and-dirty overview of this Mozart classic. Sure, it’s a watered-down version of the original, but it achieves its goal of exposing its young audience to the basic gist of the story. As far as I’m concerned, any opportunity to help kids construct a foundational knowledge of the arts should be taken; plays like The Magic Flute give us that chance.

Purists might balk at the show’s lack of Mozart’s music, but one can’t deny the charm of the production’s original songs, all penned (along with the script) by Paul Deiss, Resident Music Director at Swift Creek Mill Theatre. Certain numbers will stick with you for days—I’m looking at you “Long Live Zarastro” and “Mind Your Mother”—which (unless you’ve got something against songs that are catchy and fun) you won’t mind one bit. 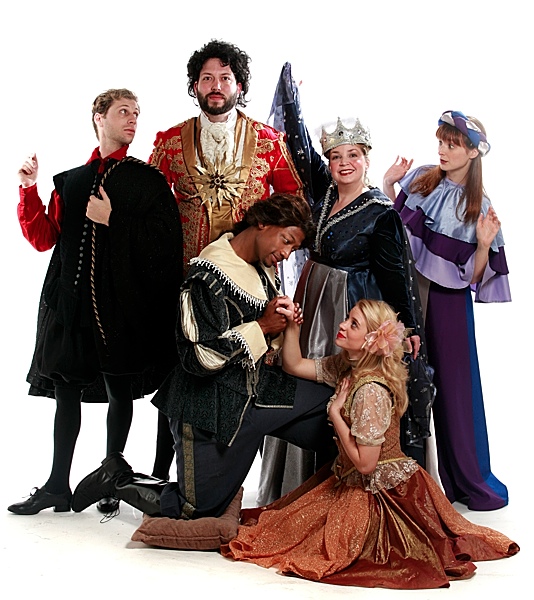 The Magic Flute features an ensemble cast, including a handful of folks reprising their roles from the 2006 production. Returning as the hilariously scary Queen of the Night, Debra Wagoner proves that she was, is, and always will be a comic and vocal powerhouse. Matt Beyer, or as I like to call him “The One With the Heavenly Pipes”4, brings a much-appreciated touch of sarcasm to the production with his portrayal of Papageno; his presence helps keep the play from shifting from “sweet” over into “saccharine,” which, in my experience, happens all too often with children’s theater. Also returning is Russell Rowland, whose booming voice, imposing frame, and distinctive facial hair have convinced me he was pretty much born to play someone named “Zarastro.”

Rounding out the cast are Josh Marin as Tamino (you might recognize him from last Fall’s Young Thomas Jefferson); Liz Blake White as Hazel; Nicole Oberleitner as Gretchen and Papagena; and Jackie Reynolds (a current VCU student5) as the lovely Pamina.

And of course, there’s Matt Shofner.

New to this production of The Magic Flute (but not to Virginia Rep and its earlier iterations, by any means) Shofner takes on two roles: Monostatos, Zarastro’s conniving but fairly harmless jailer, and Effie, one of the Queen of the Night’s female attendants. It’s always a treat to witness Shofner’s commitment to his characters, but it’s especially fun when he really gets to show off his comedic chops. Shofner’s Effie had me (…and my son…and everyone else in the theater) in stitches every single time he/she took the stage–partly because of Shofner’s impeccable timing and abundance of sass, but mostly because we could tell he was just having so much fun.

And really, they all were–we all were. For me, that’s what it takes to get children’s theater right. You want it to be endearing and whimsical…and thanks to Mercedes Shaum’s sets, Lynne M. Hartman’s lighting design, and Sue Griffin’s delightfully layered costumes, The Magic Flute definitely is. But if you can achieve that while also adding some “meat” to the production–through humor or great music or a cast that is clearly invested in making sure every person in that theater (young and old) has a good time—you’ve pulled off something great.

The Magic Flute continues at Virginia Repertory Theatre’s Willow Lawn location through February 10th with morning, afternoon, and evening performances. Tickets range from $10 to $16. See the website for more details. Kids as young a three-years-old will enjoy the music, sets, and costumes, but the plot might be a bit over their heads; Virginia Rep suggests the storyline will be most appreciated by kids ages seven and older.

The Magic Flute is also Virginia Rep’s entry into Richmond’s 2013 Acts of Faith Theatre Festival. The Sunday, January 27th performance will close with an Acts of Faith talkback session. Learn more on the Acts of Faith website.