My four-year-old son and I recently took a trip up to our nation’s capital to check out the Ai Weiwei exhibit currently at the Hirshhorn–it’s the perfect father-son trip! A couple of months ago I watched, Ai Weiwei: Never Sorry, an incredible documentary about Chinese dissident/artist Ai Weiwei. If you’ve got 91 minutes and a Netflix streaming account, I suggest you check it out. His art is interesting, accessible, and super political.1 In 2011, the Chinese government disappeared Ai Weiwei for three months on accusations of tax evasion, and he’s currently prohibited from leaving China. 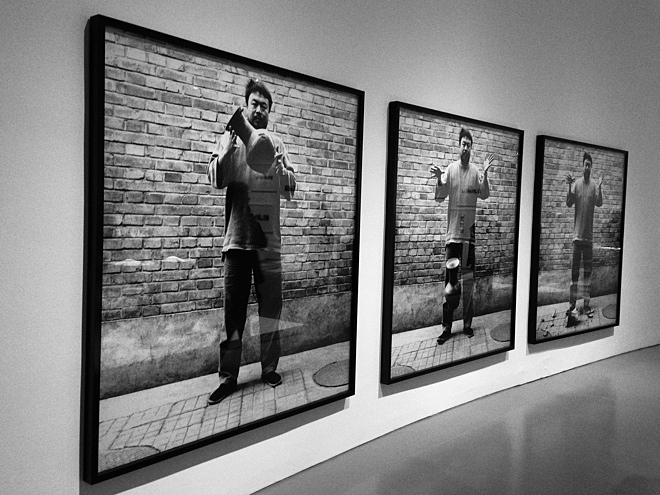 So when I saw that the Hirshhorn had an Ai Weiwei exhibit at this very moment2, I was stoked! When I decided to take my four-year-old son with me to see the exhibit, as a sort of father-son trip, my stokedness was taken to new stokey heights.

Since our son, JR, has grown a personality all his own, we’ve tried our best to expose him to art as part of his daily life. Mostly that means frequent trips to the VMFA (Chihuly leaves this weekend!); music during breakfast, dinner, and lazy weekends; and lots and lots of drawing. So far we’ve discovered JR loves British sporting art,3 Black Sabbath, and he prefers markers over crayons. The craziest part of parenting, so far, is watching him come into his own opinions on art, music, and whatever else.

Additionally, I think it’s important for JR to experience Moments of Cultural Significance. This means waking up in the middle of the night for the rocket launches from Wallops, seeing the 13th Amendment at the Virginia Historical Society, or, in this case, visiting the Ai Weiwei exhibit at the Hirshhorn. Maybe he’s too young to “appreciate” it, whatever that means, but I still think it’s stuff he needs to experience–even if its just to make a trip to the art museum commonplace.

So up to DC we went, because who knows when Ai Weiwei will be back with another exhibit that’s just a hop, skip, and a jump away from RVA (and who knows when he might just be disappeared for good)? The trip to DC is super easy, and even with a four-year-old who can, at times, not be a big fan of things (any thing, really), there’s no reason not to make the trip a at least couple of times a year. Here’s our itinerary, which worked out super well but is surely not the only possibility: 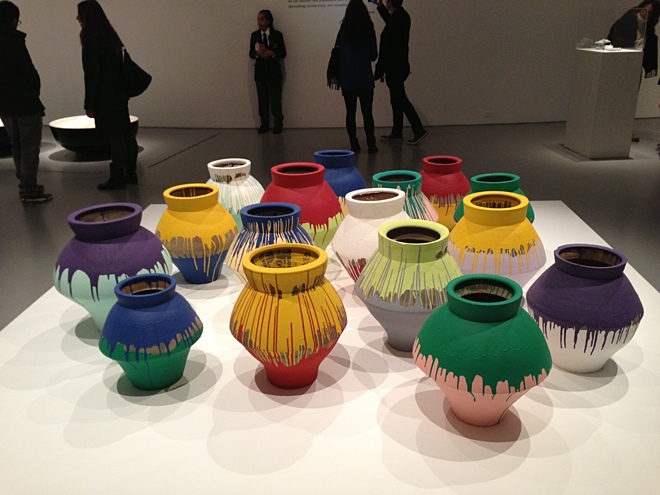 While the Hirshhorn is generally kid-friendly, the Ai Weiwei exhibit is especially so. JR’s favorites were the giant pile of porcelain crabs, the huge snake stuck constructed of backpacks that hangs from the ceiling, the brightly (re)painted two-thousand-year-old vases, and the massive Zodiac Heads stationed in the museum’s central plaza.5 He was also mesmerized for a good thirty seconds by the massive glowing cube of lights.

Now, you’ve got to remember that Ai Weiwei is basically a Chinese dissident, and a lot (most) of his work is a big FU to China. It carries with it some weight and serious messages. His work with backpacks, for instance, is a result of witnessing the destruction and death (especially of school children) caused by the 2008 Sichuan earthquake:

The idea to use backpacks came from my visit to Sichuan after the earthquake in May 2008. During the earthquake many schools collapsed. Thousands of young students lost their lives, and you could see bags and study material everywhere. Then you realize individual life, media, and the lives of the students are serving very different purposes. The lives of the students disappeared within the state propaganda, and very soon everybody will forget everything.

It’s up to you how much you want to get into the meaning and purpose behind each piece. For us, JR never asked, so we never got into it, and I think that’s perfectly fine. Your kids may want to know why Ai Weiwei chose to put a pile of porcelain crabs on the floor, and if so you might need to have a conversation about online censorship in China.

I really can’t recommend the trip enough, and if you can’t make it up for Ai Weiwei, don’t fret. The Hirshhorn’s next exhibit is sure to be great. And, best part of the day: we were back in Richmond at 3:30 PM, just in time for everyone to curl up in bed and take a nap.