I’ll be running in the Rock ‘n’ Roll Virginia Beach Half Marathon this weekend, and I am terrified.

While it’s true that I’m still nearly three months out from the Richmond Marathon, I am but days away from my first big race.

I’ll be running in the Rock ‘n’ Roll Virginia Beach Half Marathon this weekend, and I am terrified. So terrified, in fact, that my digestive system has declined to behave in any sort of civilized manner for the past week or so. Just ask my boss, who has all but stopped inquiring “Again?” when I excuse myself from my cash register for “One quick sec.”

It’s not really the mileage that frightens me. Yes, 13.1 miles is a whole lot, but I’ve run that many times. While it wasn’t easy, necessarily, it was far from terrible. Typically, once I get past mile four or so, I’m golden: settling into a comfortable pace and losing myself in a combination of the day’s iPod selection and a hyperawareness of what’s going on with my body, paying close attention and running checks from the toes up to make sure that everything feels okay. I guess what I’m saying is that barring some big, unforeseen circumstance, 13.1 miles is something I know I can run.

There’s just so much I don’t know about running a race. I mean, I’ve read every single runner’s guide ever published and have seen people running races in movies and on television a time or two, but what really happens? What about things like portapotties and little cups of water and sports drinks and all those other runners?

I mean, look at this picture from their Facebook: 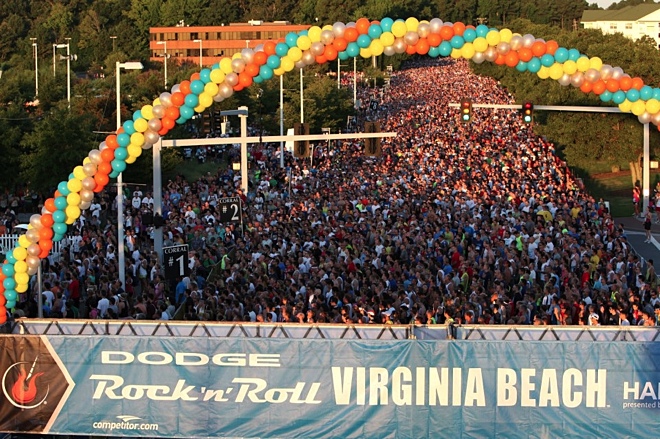 That is the starting line for this race. Overwhelming, right? Well, consider this: that photo only shows half of the runners. That’s right, there are more than twice this many people, they just wouldn’t all fit in the picture. Isn’t that nuts?

Thankfully, I got an email with everything I need to know about the race, except how to not freak out. There were maps, which I carefully memorized so as to eliminate worry about bladder and tummy issues. There was info on the official sports drink and energy gel of the race, both of which I immediately purchased and used on a few runs, for the same reason as above. There were very detailed instructions on parking and meeting your loved ones after the victory, because most of those people pictured above come with both vehicles and cheerleaders and, understandably, it can become a bit of a cluster if people don’t follow the rules.

Now, this race, like many races with thousands of participants, uses start corrals which are assigned based on previous race times or predicted times. This kind of organization of people is supposed to facilitate a smoother flow of traffic creating a faster and safer environment for participants. The everything-I-need-to-know email included the fact that I have been assigned to Corral 20, the very last group to start. Yes, it turns out that the powers that be in the Rock ‘n’ Roll marathon offices, which very well may be computers or robots or something, saw my predicted finish time and placed me with the walkers. In other words, I’m not terribly likely to get run over by anyone, which, being a slow runner who runs slowly is a big fear of mine, but it’s a tiny blow to my ego.

A customer maybe twenty years older than I came through my line a few days ago and was wearing a shirt from the same event, dated 2006. I asked him about it and he let me know that he and his wife had participated every year since 2002. He said that they like it because it’s a pretty walk and they get to hear a lot of good music. He also let me know that they too were starting in Corral 20. “BUT!” I wanted to shout “I’VE ONLY JUST CONVINCED MYSELF THAT I’M A RUNNER!”

However, unless a sinkhole opens up and swallows 20,000 other people, and I’m spared because I was the only one moving so slowly that I had time to go around it, the odds are that I’m not going to win this race, or any race, really, so what does it matter where I start?

And there’s not a lot of room for ego in running, anyway. I mean, making an exception for those who log their miles on treadmills in the comfort of their own homes, running is probably the most disheveled you’ll ever look in front of other people. Or at least let’s hope so. For me, I roll out of bed, teeth unbrushed, bed head in full effect, makeup askew from a full night of dreaming I’m Dorothy in The Wizard of Oz and also full-blooded Puerto Rican, don spandex, and step out in public. And public is that place where I proceed to sweat buckets and huff and puff like a human version of The Little Engine That Could. In fact, every once in a while, I’ll catch sight of my red-faced self in a window as I run past and think that if I saw me I’d call 911.

Much of what I’ve learned from my running experience so far is about letting go. At this point in my journey, I’d rather be surrounded by the people who are there to have fun, meet others, and perhaps take this sort of thing a little less seriously, and I suspect that those are the people who’d prefer to be around me, as well.

So, I’m looking forward to gaining experience, not to mention the super cool medal I will be awarded upon finishing, which, I’m not going to lie, was a big motivator in me getting into races in the first place. “Wait, there are medals? I’m in.” Mostly, though, I’m excited to revel in the experience of running my first race. Never again will I possess the lovely naiveté that I have now, and I will miss it. What I won’t miss, however, will be paging my boss, repeatedly, to cover my post while I jog to the ladies room. At least not for another three months, or so.