In the second and final part of this southern saga, No BS! takes Birmingham, Alabama, by storm before heading home to their beloved Richmond.

May 25: I spent the night at Claire Hooten’s apartment with all the late night hangers (minus Bryan who headed home to Mom and Dad’s place). Claire’s cat, Matilda, a feline alarm clock, made a conscious effort to rub against everyone sometime around 9am (just in case we forgot whose home we were in). After lounging, grubbing some McDonalds and Chick-fil-A, and watching Crash (talk about heavy movies), it was time to explore downtown Birmingham, daytime style.

Downtown Birmingham is an interesting place. The sidewalks and streets are orange in places. It is very clean. And just as with the rest of our trip, the people are wonderful. We stopped off in two different record shops (kid in a candy shop, eh?) that had rooms of records from every genre imaginable. 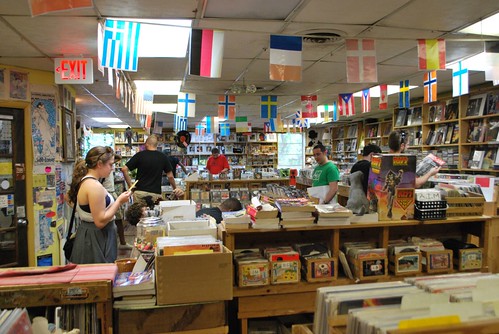 No BS! in Charlemagne Records

Birmingham has parks sporadically placed through its neighborhoods, similar to parks in Richmond’s Fan. Not far from Claire’s apartment is Rushton Park, a recessed park with benches, paths, and a basketball court. Almost the entire trip until now Stefan had been preparing his Infuzion basketball, constantly pumping. He was ready to ball. 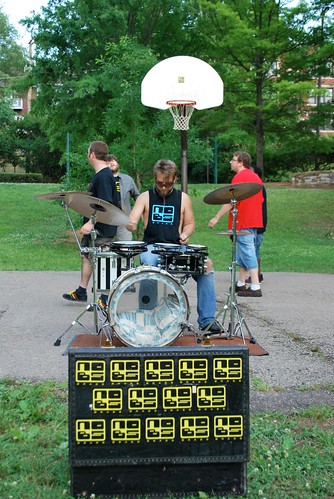 Lance drums, others ball. Such is life. 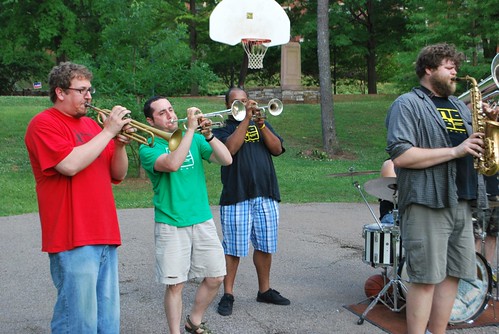 Rob Quallich, Taylor Barnett, and Marcus Tenney hold down the trumpet section while David Hood is the lone sax

6:45pm CT: After busking/rehearsing a few tunes, it was time to load up the Meat Wagon once again and head to The Bottletree for soundcheck. Lance once again impresses us all with his ability to navigate the monstrosity that is The Meat Wagon and finally parks behind the club to load in through the backstage area. 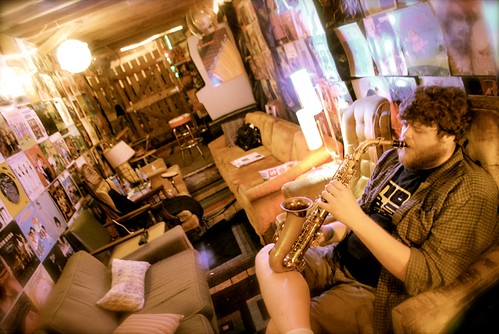 David Hood warms up back stage at The Bottletree in Birmingham, AL.

This seems like an appropriate time for an aside to describe the backstage area. First, a large room, lights hanging from the ceiling and plenty of room for all the gear. There are bar stools lining one wall, straight ahead is the entrance to the stage and restaurant/bar area. To the right is a leather couch and a tiny hallway. One side of the hall is a long couch and on the other side is a love seat with two single chairs against it, one with a massage pad. Past the couches is a Super Mario Bros arcade game…no coins necessary. Walking down the hall, past Super Mario Bros, is another door leading to a patio. Astro-turf on the ground, tiki torches, lounge chairs and two camper trailers with beds and flat screen TVs in them. I have been backstage at The National, which is awesome by the way, but I think that The Bottletree has them beat by far with their eclectic decorations and ingenuity.

The rest of the Bottletree is a restaurant by day and music venue by night. All of their walls are covered with LP sleeves (Sesame Street Fever, parody of Saturday Night Fever, was my favorite). The entire band filled up the bar to sit and order dinner after soundcheck; my black bean burger with sweet potato fries was right on point. 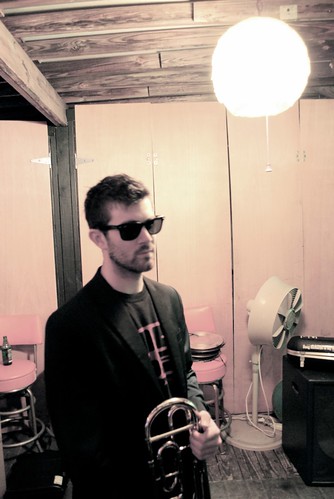 With time to kill before the hit, what do you think everyone did? Rob took a nap. Taylor called his wife and daughter. Marcus and I practiced out back in the alley. A few got into the Super Mario Bros. The Chad Fisher Group took the stage around 9:30 with Chad on trombone along with trumpet, tenor sax, keys, and drums. According to Chad, his bassist and guitar player bailed on him at 5pm forcing him to call the key player to sub. No one had any idea. The crowd really picked up towards the end of their set and during the break. 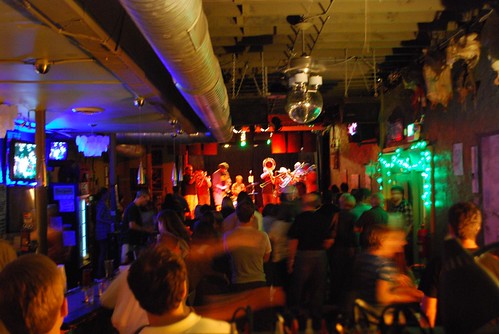 11pm CT: No BS! Brass Band takes the Bottletree stage in Birmingham, Alabama, bringing the south everything they hadn’t expected. The set was strong, full of energy. The crowd fed the band who fed the crowd. There were even a handful of people up front singing along to the songs (What? This is awesome!). 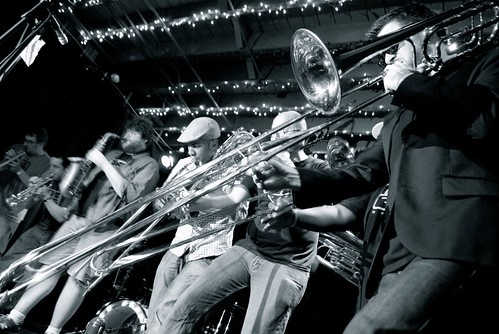 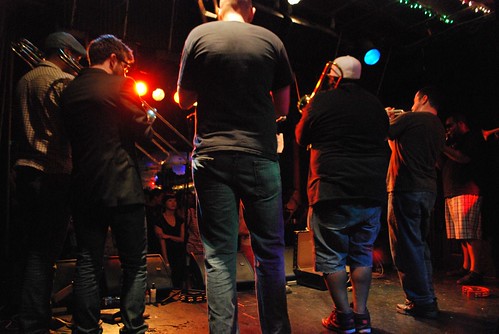 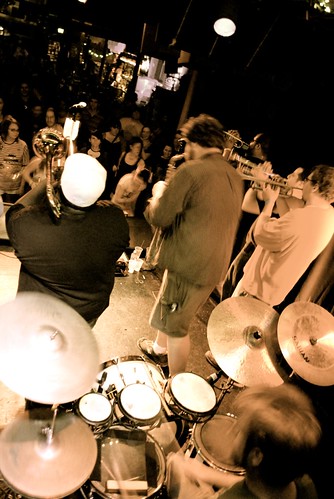 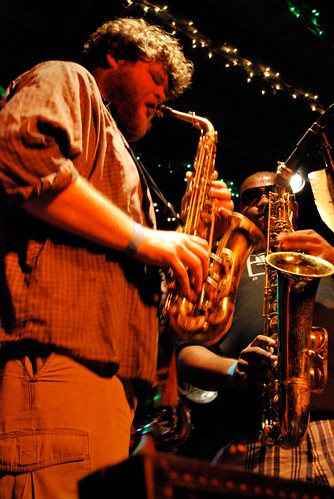 I Ain’t Even Gonna Call Ya

Two sets of mayhem and 10 sweaty Brass Scene Kids later, the club began to empty and we began to party. While the great bartenders cleaned the front, we (along with Claire, Kirk, and some friends) hung deep in the back. Green room, to patio, to outback, to the patio, into the trailer, there was so much going on back there. 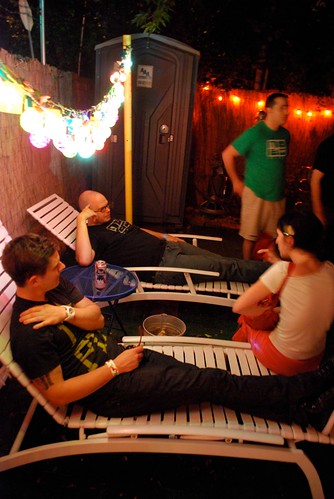 Kirk and Bryan Hooten relax on the patio.

2:30am CT: The club is closing and we are all standing out in the back alley discussing the next move. Marcus, full of wisdom, was “just saying” that it is 2:30 am. Central time. Birmingham, Alabama, in the morning. After that knowledge drop, we board the Meat Wagon, headed towards our beds at the Hooten residences. En route, we got lost and Rob started a glow-stick battle, much to the amusement of Lance and Bryan, pilot/co-pilot respectively (thrice sarcasm). 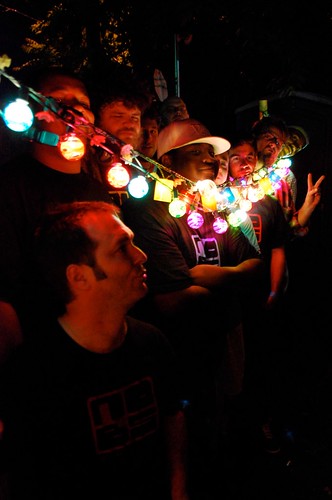 May 26, 9:40am CT: Again, Taylor saves the day as the responsible one, giving a glorious wakeup call before the bus arrives to hit the road. What would starting a long trip be without set backs? After hitting the three different sleeping spots, we had to head back to the Bottletree to retrieve Pace’s second horn (didn’t know it was off the bus, didn’t know to look for it back on) and a bag that I (I know, shame, shame) left at Claire’s apartment.

12pm CT: We’re on the road once again. 679 miles from Birmingham to Richmond and all of them had to be traveled at once so that we could deliver Reginald Chapman to work on time at Lamplighter (oh what a wonderful world it would be if the music could be our only job). This epic journey consisted of two epic games of spades, many reigns of The Presidents, a crazy variety of music, and fairly smooth sailing. Thunder storms and traffic slowed the ol’ Meat Wagon around Atlanta, Georgia, but after that, it was smooth sailing.

The final leg of the trip could be described, to continue the young kid around Christmas analogy, as the few days after Christmas and before school starts again: it’s really all downhill from there. We stopped for the classiest of business dinners at an Applesleaze (I mean Applebees) in North Carolina.

4:30am ET: RVA, we’re home. We all unload the bus in a slow, lethargic manner, gradually retrieving our belongings and unpacking all the gear. Chapman heads to work. We all slowly make it to the car and eventually home to bed.

Was the tour a success? Yes, and in so many ways. First, I got to spend five days with ten of my best friends, living what we all love: music. We had the chance to meet so many wonderful people and experience the generosity of the south. We were able to play music for a vast array of people, many for the very first time. As Reggie Pace, trombonist, leader, and founder of the band, likes to put it, “We’re spreading the gospel.” It’s the No BS! gospel, and reaching one town, one person at a time. 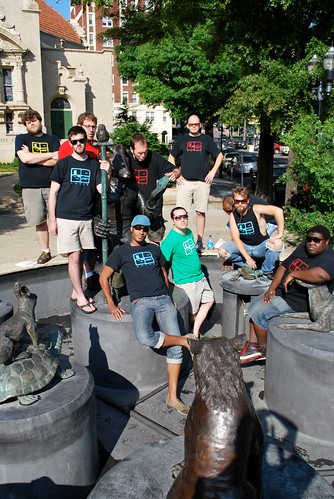