New radar technology on the way

Beginning February 16th, the National Weather Service Doppler radar is getting a significant upgrade. I’ll help you navigate through all the big words and understand what exciting changes are on the way. Beginning in 2009, the National Weather Service began a campaign to upgrade the 164 Doppler radar units currently installed and in operation across the United States and its territories. The units are being upgraded to include a technology known as “dual pol”, short for dual polarization. While 2009 and 2010 were dedicated to testing some specific radar units located at NWS research sites, the full rollout began in the second half of 2011.

Let’s back up a second and talk about the Doppler effect. In scientific terms, it says that a wave transmitted from a source to a receiver will experience a frequency shift if either the source or the receiver is in motion, and that the frequency shift will be proportional to the speed and direction of the station in motion.

Sounds complicated, right? It’s really not, and you experience the Doppler effect every day. Think about a police siren. If you’re standing near a police car you hear its siren at a constant pitch. If the car moves away from you, the pitch gets lower. If it moves toward you, the pitch gets higher. The same would happen if you walk toward or away from a stationary police car, but its less noticable because you’re moving at a far slower speed than the car is capable of. That’s the Doppler effect.

This isn’t just limited to sound waves, either. The same effect happens with all electromagnetic radiation. Radio, visible light, and microwaves (to name a few) are all affected in the same way. However, because our ability to perceive EM waves is limited to visible light, and the speeds at which objects move aren’t enough to shift the frequency of waves appreciably, it’s easier to notice the Doppler effect with sound waves than with light waves.

Current Doppler radar units broadcast a horizontal wave–it oscillates from side to side as it leaves the transmitter. It then bounces off of any hydrometeors (that’s the fancy term for water droplets or ice suspended in the atmosphere), and by measuring the returning wave the radar unit can determine their speed and direction.

Because the wave oscillates in the horizontal direction, we can say it is horizontally polarized. Thus, because current Doppler radar units only send out a horizontal beam, they only have a single polarization.

While this guy is adorable, this isn't the kind of Doppler upgrade I'm talking about. (Credit: Dan Goff)

The dual polarization upgrade gives us an entirely new bevy of data to use to analyze the size and shape of hydrometeors. Traditional Doppler radar has done very poorly with non-liquid precipitation. Snowflakes and ice crystals are all very small, especially when compared to raindrops. While rain drops are typically between 0.5 and 4.0 millimeters in diameter, ice crystals, especially those still suspended in the atmosphere, are much smaller–somewhere on the order of 10 micrometers (roughly the same width as a cotton fiber). Because these crystals are usually two-dimensional, they become even more difficult to detect via traditional radar. The dual polarization technology allows us a second perspective when it comes to the size of anything and everything suspended in the atmosphere. Using this data, we can make more accurate observations of rainfall and snowfall rates, in turn leading to more accurate flood and snowfall forecasting, among other things. Other research is already taking place using dual pol radars for tornado and tornado debris identification, and others still are looking at improving hail forecasts. These improved forecasts will lead to better, more accurate and more specific warnings. 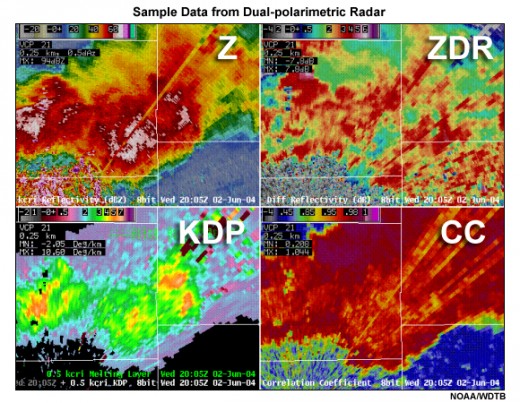 What does all this mean for Richmond? Well, the first bit of good news is that the upgrade team responsible for performing the upgrades on the Wakefield radar is running well ahead of schedule. Originally, service was scheduled to begin on February 27th, following the two week period scheduled for the radar upgrade at Dover (Del.) Air Force Base. The Dover AFB upgrade finished on February 6, and the Wakefield radar was taken out of service to begin its upgrade on the 9th. It will be back in service no later than February 16th. When the radar comes back up, it will be generating all of the products in the image, as well as many more. Interrogating all of the new products available is a bit out of my purview, but thankfully the National Weather Service has put together some excellent resources to understand what it all means. I haven’t found any places on the web making these products available just yet, but I imagine that will change in the coming months. Additionally, if you use RadarScope on your mobile phone (Android or iOS) or Mac, you can already view these products. Other software vendors are currently working on improvements to offer these products in the coming months as well.

If all this is a little too much to swallow, the folks at NOAA have also put together a short video explaining more about dual polarization technology.

And if you want to dig into the heart of dual polarization, understand what’s coming, and what each of these new images mean and what you can do with them, I recommend going through the training options offered by the NWS Warning Decision Training Branch. There are modules for both meteorologists and aspiring meteorologists alike. Make sure to set aside at least two hours to go through them all.

I know I’m looking forward to using the dual pol technology. I hope I’ll be able to improve my forecasts, too. Now, if we just had some snow to look at…