New pizzeria in the Museum District

The Devil’s Triangle just added another spot for takeout. Belmont Pizzeria opened last Friday at the corner of Patterson and Belmont in the Museum District.

Melinda and Sal are first generation to the United States. Everything at the Pizzeria is handmade from family recipes passed down from their grandparents from Sicily. Carl Nuara came to the U.S. in 1960, bringing with him the experience of his father’s bottega in Sicily. The family also maintained a vineyard there with 6,000 grape vines, and olive trees for homemade olive oil.

The Museum District location was a year in the making.

“We were scavengers, going around town,” notes Sal of their search for a space. He has been cooking for ten years and has been in the kitchen even longer. He used to have a cafe in the West End but sold it. “I wanted more walking traffic, to stay open later,” he said. Belmont plans to stay open until 11:30pm week nights, and midnight or later on the weekend. They hope to add beer and wine soon. 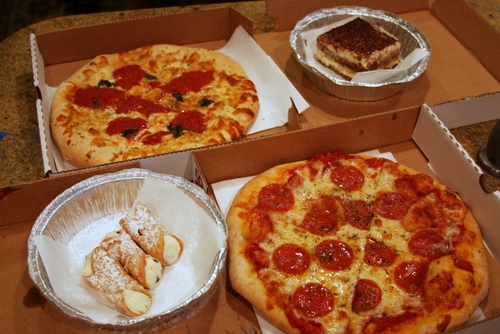 Sal wants to have the best prices for homemade, real Sicilian food and a connection to the community. My Margherita pizza was fresh and garlicky, with a crispy-soft crust. The pizzeria will also offer subs, sandwiches, salads, pastas, and homemade desserts. The tiramisu was light and delicious, and the smaller bite-sized cannoli was also delightful.

Not even open a full day, the place had constant traffic the entire time I was there. The space is small with a counter at the window to eat a quick slice or to wait for carryout. Belmont Pizzeria will also deliver, for a $12 minimum.

For more information on restaurant news and other happenings in the Museum District, stop by West of the Boulevard News.