Ipanema’s Beer Dinner on Sunday, January 16th. $42 (includes tax and tip) gets you four courses of local beer, food, and conversation with savvy foodies and craft beer lovers. We interviewed the chef and beer man for the event. ">

If you’re off for Martin Luther King Jr. Day next Monday, then you definitely should come to Ipanema’s Beer Dinner on Sunday, January 16th. $42 (includes tax and tip) gets you four courses of local beer, food, and conversation with savvy foodies and craft beer lovers. We interviewed the chef and beer man for the event.

If you’re off for Martin Luther King Jr. Day next Monday, then you definitely should come to Ipanema’s Beer Dinner on Sunday, January 16th. $42 (includes tax and tip) gets you four courses of local beer, food, and conversation with savvy foodies and craft beer lovers. We interviewed the chef and beer man for the event.

Chef Will Wienckowski started working for Ipanema Cafe in June of 2010. He was hired as sous chef and, at the time, the restaurant was without a head chef. Mack, the chef from owner Kendra Feather’s other restaurant, Garnett’s, had been coming over to assist with cooking, and Wienckowski sort of just fell into the role of head chef. He’s officially held the title as of two weeks ago. His previous experience was at CraftBar in New York City, one of current Top Chef head judge Tom Colicchio’s restaurants.

Wienckowski enjoys the flexibility he has at Ipanema. “You can really do anything,” he says.

Wienckowski is from Richmond and attended Douglas Southall Freeman High School; he’s has worked locally and done two stints in New York. Now he’s back, working on a few credits to finish up his degree in Spanish at VCU. At 25, he’s modest with a shy smile. When asked how he manages his new duties of overseeing a kitchen of about seven employees, he remarks that everyone is really easy to work with.

A new challenge working in a vegetarian restaurant like Ipanema is that is also attracts those who have other dietary challenges, something Wienckowski’s never had to deal with before. “I try to keep something in the back of my head (for those who might be gluten free, or have another restriction),” he adds. “No one likes to feel like they’re getting the second best version of something.”

You can tell he’s excited and perhaps a little nervous about the beer dinner. He wants to make a good impression. He points out that customers will see many beers they’d have trouble finding in stores. Serving as emcee and beer man of the evening is Paul Karns, writer/designer and member of a home brewing co-op. He’s in the works with a few partners to start a craft brewery in the Richmond area. Both he and the chef emphasized the farm-to-table, regional aspects of the dinner (see menu below). Karns went with beer pairings “that might not be the most immediate or obvious choices.”

For the first course, Karns chose a cider from Floyd, VA. The cheeses will be coming from the Charlottesville/Floyd area, and he thinks they’ll pair appropriately with the terroir of where the cider is made. Several of the beers were obtained just for this dinner. Blue Mountain agreed to release one case of Dark Hollow (which is normally only sold at their brewery) and Tuppers’ was one of the first craft brewers in the region, explains Karns.

The menu is full of classic, winter food. The Welsh rarebit dish is a play on words of the poor man’s rabbit dish. The story goes that the Welsh were too poor to actually get rabbit, and perhaps too dumb to tell that what they were eating wasn’t actually meat. The veggie version is cheese stewed with beer or another alcohol, presented over toasted bread and roasted vegetables. “It’s very peasant food–the whole menu, frankly is,” muses Karns. Tuppers’ Keller Pils is “dry and hoppy and will go nicely against the rarebit’s richness.”

Wienckowski was camera shy, but he happily whipped up two of Ipanema’s current menu items for me to photograph: the harissa stuffed dates wrapped in eggplant ($6.50) and the mixed green and pickled pumpkin salad ($5.95). I’m told harissa is a North African chili paste. I’m not really a fan of dates, but these were astounding. The sweetness of the dates was expected, but the hotness of the harissa was a perfect complement and there was also a hint of saltiness. They were warm and mushy and a delightful appetizer. I’d get them again in a second. 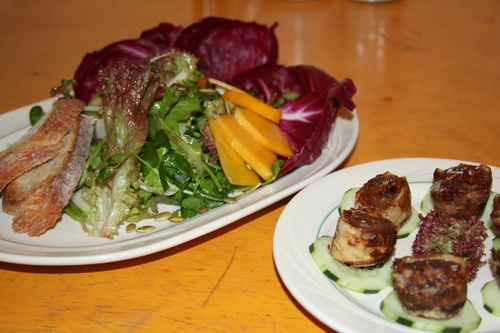 The a mixed green and pickled pumpkin salad and the harissa stuffed dates wrapped in eggplant. Note: These dishes are NOT being served at the Beer Dinner, but they are currently on Ipanema’s menu.

The salad had an ingredient I was unfamiliar with: chayote, a type of squash which very much resembled pear in looks and taste. Wienckowski told me I’d be back for more of the pumpkin, and I didn’t think much of it at the time. He was correct. It didn’t really taste like pumpkin, it just tasted like “good”. The bright orange pieces were satisfyingly crunchy and surprisingly sweet, with a hint of the pickled flavor you’d expect.

I also got to sample the flan drenched with Grand Marnier, one of the dessert items for the beer dinner. I can see how the orange-y creaminess of the flan will pair with the dark chocolate covered churros. Wienckowski’s love of Spanish cuisine is evident in his use of flavors here, and his eyes light up when discussing the time he spent studying abroad there (an experience we share). “It’s awesome how regional everything is there,” he says of Spain. “25 miles in any direction and everyone’s eating something different and dressing in a different way.”

Dinner starts at 6pm but folks are welcome to linger and ask for seconds after the formal dinner is over. Ipanema will be closed for regular business that evening. “If I wasn’t working, I’d come,” offers Wienckowski.

Tickets can be purchased right over here. There are no physical (as in actual paper) tickets for this event. After purchasing your tickets, please print your receipt so you can show it at the door.