It’s a nice change to drive south for once, as I did last weekend for a short getaway to Wilmington, North Carolina where there’s new scenery and no D.C. mixing bowl to battle. While I did my research on foodie places to seek out ahead of time, I think it helps to hear some real reviews of how my dining experiences went, should you be planning to head that way anytime soon.

It’s a nice change to drive south for once, as I did last weekend for a short getaway to Wilmington, North Carolina where there’s new scenery and no D.C. mixing bowl to battle. While I did my research on foodie places to seek out ahead of time, I think it helps to hear some real reviews of how my dining experiences went, should you be planning to head that way anytime soon.

One travel day, after working a whole day with no dinner, it was around 7:30 p.m. when I started to get hungry. I had been talking about biscuits, so when a Bojangles popped up, the promise of biscuits called to me. I had never been to one, and once inside, it felt like I’d stepped into the past. Most of the menu item prices started with the number one. This was a pattern I noticed for most of North Carolina: everything was surprisingly cheap. The cashier still used a microphone to call orders into. My egg-and-cheese biscuit was warm and gooey and hit the spot.

The bed and breakfast where I stayed fed me so well each morning that I was barely hungry come lunchtime each day. Saturday night, I traveled about 20 minutes to nearby Carolina Beach. While the beach town is long and full of gorgeous houses, there are not a lot of culinary options, so I ended up at Ocean Grill at 1211 S. Lake Park Boulevard. My table upstairs had a view right on the ocean. The menu was heavy with fresh seafood and fried favorites. My Baja grilled chicken tacos were pretty standard, though tasty for $8.99 and my companion’s fresh, rare seared tuna with mashed potatoes and asparagus was filling for $19.99. Minty mojitos and cocktails with names like Agent Orange were in the $6 to $8 range, which was nicely affordable, given beach town tendency to inflate prices for tourists. Turquoise and blond wood echoed the ocean view, which included the fresh-off-the-beach patrons at the restaurant’s companion bar, the Tiki Bar, set outside, atop the ocean pier. During the heat of sunset, the place was hopping, but proved to be better after dark, when the ocean breeze provided a welcoming coolness. A live band was just packing up and canned beer was ridiculously cheap and refreshing.

It’s not the beach without soft serve ice cream, so I bypassed a Tastee Freeze for a local joint, Pop’s Frozen Custard. At 1114 S. Lake Park Boulevard, it’s a roadside walk-up stand. While many soft serve places don’t give you a choice of sizing, I happily ordered a medium, which turned out to be more like a small, for $3.80. 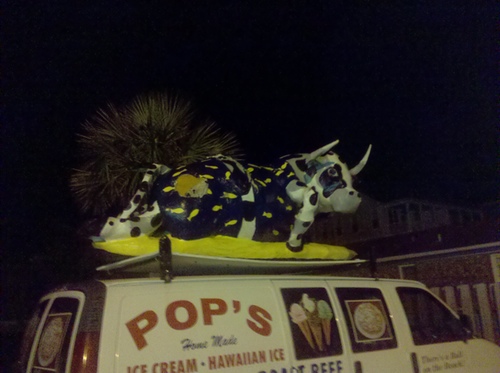 Back in Wilmington, on a miserably hot and humid Sunday, by 4:30pm, I was feeling a bit faint, and stumbled across Bottega at 208 N. Front Street. It was a place I’d wanted to see. Billed as an art, tapas, and wine bar, the long narrow space was mostly empty of patrons. Art lined the walls, and the front bar was L-shaped and made of sleek, light-colored wood. There’s a back room with couches, board games, and a small TV, playing a documentary on this particular visit.

Liz, the manager, was friendly and we chatted about the heat and local places in town. Bottega has been around for years, something Wilmington should be grateful for, as the atmosphere there was unlike anything else in town. It felt like a hipper, younger cousin of Richmond’s Secco. Local artists had original drawings and watercolors for sale in the back, and I picked up a watercolor nude by Cameron Batanides for only $30. 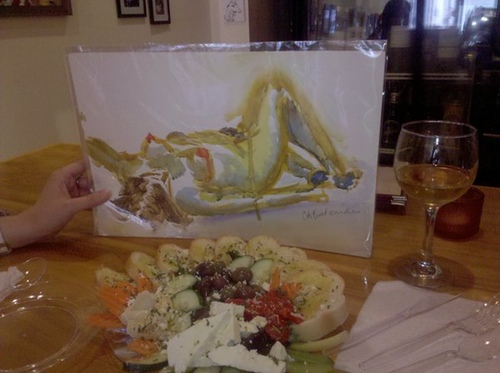 The Mediterranean Sampler (hummus, Greek olives, feta, veggies, and bread all drizzled with olive oil and parmesan cheese for $8.75) was beautiful and delicious. My champagne and pomegranate mimosa was refreshing for $5, and my companion’s chilled honey-wine mead was $6.75. Other small plates, a diverse wine menu, $5+ wines by the glass, fun mixed drinks, and a whole page of microbrews rounds out the menu.

Sunday night, I discovered most places closed early or weren’t open at all. I squeaked into Deluxe (114 Market Sreet) at 9:30pm, a half-hour before closing. Besides two men at the bar, my dining partner and I were the only patrons in the expansive space. After a massive thunderstorm soaked us, the host/waiter was kind enough to bring us cloth napkins to towel off with. Deluxe bills itself as “casual upscale dining,” a term I find to be an oxymoron. Their prices and white tablecloths certainly fit the upscale definition; most entrees were over $20. Their wine list was an entire book, including pricing up to $1000 a bottle.

The décor was pretty and colorful. Wooden slats making up the right side wall were painted a glossy turquoise. Opposite, exposed brick backed the long bar, and modern art was throughout, with many pieces echoing the shiny wall. I imagine they probably have a happening bar scene but it was hard to imagine, based on the emptiness of Sunday night.

The waiter painstakingly went over the menu, pointing out his favorites. I had the large version of the panzanella salad: organic baby arugula, goat cheese, baby cucumbers, carrot shavings, shaved almonds, house made croutons, and smoked tomato vinaigrette for $7. The heaping serving was a tad dressing-heavy, but filling, and the croutons were my favorite. I was surprised when the cornmeal crusted “Black Bay” oysters — with apple-wood smoked bacon, spinach, roasted grape tomatoes, béarnaise aioli, and Creole mustard vinaigrette ($11) — came out looking like fried popcorn chicken with accidental garnish, but my companion ate it all.

The hands-down favorite of my weekend was Bottega—a triple threat of food, drink, and atmosphere. I was sad to be leaving so soon. If I lived in Wilmington, I’d be a regular there.

Stay tuned for the next installment: Wilmington nightlife!