More familiar to music fans as the drummer from No B.S. Brass, Lance Koehler’s approach to recording has earned him hundreds of credits recording bands in Richmond.

Grab a handful of CDs from Richmond bands. If you check the liner notes, one name will likely appear more frequently than the rest. Lance Koehler has been professionally capturing the sounds of Richmond for a decade and he shows no signs of slowing down.

More familiar to music fans as the drummer from No B.S. Brass, Lance Koehler’s approach to recording has earned him hundreds of credits recording bands in Richmond. Minimum Wage Recording, which was created just outside the French Quarter in New Orleans and is now located in Oregon Hill in Richmond, Virginia, is the product of a very strong vision. Working tirelessly, Koehler offers very affordable rates that enable artists the ability to experiment and spend extended periods of time in a professional studio.

Minimum Wage isn’t a business; it is the product of a life of fascination with sound and the strong personality of Koehler. In 6th grade, he was like most kids in Southern California. Listening to rock and punk music, playing in bands and having a good time, but he also developed an interest in how records sounded. While listening to Pink Floyd’s The Wall and Dark Side of the Moon, he became interested in recording and began working with a 4-track recorder.

After high school he bounced around between Santa Barbara, San Francisco, Portland and elsewhere. He took a recording class in Southern California. He spent time with his good friend Robinson Eickenberry at his studio in Santa Barbara. He was around the culture and inspired, but without settling down a studio couldn’t happen.

Eventually, he settled down in New Orleans, Louisiana. With a more permanent residence, Minimum Wage happened naturally. It started as a part time gig in an old community center. He recorded neighborhood artists and street musicians and before he knew it, he was calling in sick to work so that he could record. One year later he uprooted the studio and moved to Oregon Hill. Within a week he was playing with Hotel X and building the original Oregon Hill studio.

Soon he was recording groups like Tiger Bomb, Brainworms and Land Mines. He was capturing everything from folk to punk and hip-hop to jazz. Word spread and his studio became a popular spot for groups like Ilad and Brian Jones. As the value of his equipment and space demands increased, the original building in Oregon Hill was falling to pieces. Despite frequently tarring the roof, serious leaks developed. A bad storm interrupted a session and left a double pained window in the studio full of water and thousands of dollars of equipment at risk. At that same time an old two-story auto garage was available around the corner. 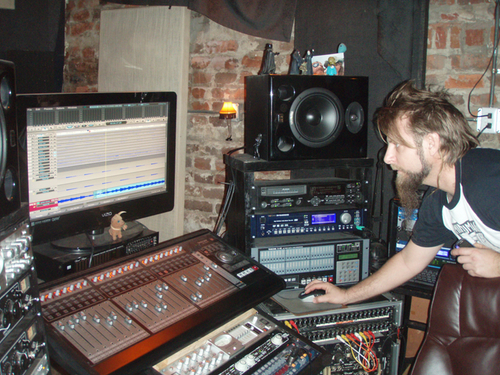 Koehler at the command center making some adjustments.

Today, Minimum Wage has three sound proof rooms combined with a large floor space that allows groups of any size to record live or by tracking (one instrument at a time).

After playing sessions in Hollywood recording studios, he was familiar with the studios “standoffish” and “stuffy” environments. Minimum Wage is far from stuffy. As if Koehler’s welcoming and helpful attitude isn’t enough, his studio is an extension of his personality. Its walls are covered in the history of the studio and Star Wars memorabilia. He even has five-foot wide stuffed fried eggs hanging from his ceiling. Its windowless downstairs, complete with technicolor lighting sets the mood for recording while its upstairs allows musicians to clear their minds while sunbathing under skylights.

The environment is important, but a studio is nothing without its engineer. Koehler loves figuring out how to “capture a band without crushing it.” Drawn to artists with personality, Koehler knows how to capture the real earthy sounds of everything from horns to vintage keyboards.

In the future he hopes to spend even more time on each project. Fight the Big Bull’s recent album All is Gladness in the Kingdom‘s liner notes by Steven Bernstein offers insight into the beauty of an extended stay at Minimum Wage. In New York, jazz bands are in the studio for only a few hours. Bernstein, a New York brass legend, was amazed at the experience of having five days in the studio.

Koehler’s relentless schedule has earned him quite a list of achievements but he is far from resting on his laurels. No B.S. Brass has a brand new album recorded and largely composed by him. Spacebomb Records just finished recording two albums with Matt White and Karl Blau in his studio. They featured a full horn section, string octet and choir in addition to a blend between analog and digital recording.

Lance Koehler has a passion and a talent for what he does, and Richmond is lucky to have such a one of a kind studio in the heart of Oregon Hill. I can’t wait to see what its second decade brings.