As the craft beer movement grows, a local company wants to make it easier to find the best craft beer you’ve never heard of. All Andrew LaBonte wanted was a good craft beer. While spending most days at his old job traveling from one city to the next, the Wisconsin native wanted the evenings to sample local beers.1 Problem was, he didn’t know how to find them. Years later, he and a team of developers have designed a way to do just that. And they’re starting with Virginia.

“American craft breweries are on the upswing,” said LaBonte in the Glen Allen offices of BeSprout Technology, a tech company founded in 2006. “We’re building a tool so everybody can experience a locally-produced beer.” That tool is a smartphone app called Local Suds. 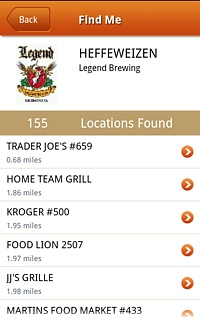 The app helps users find local breweries, restaurants that carry local beers, and events in the area. Local Suds serves as a platform for craft breweries to connect with people in their area via a mobile marketplace. Developers began work in February 2012 and have worked with the Virginia Craft Brewers Guild and local distributors to make sure that the database is continually updated. “All the breweries want this to work,” said LaBonte. He said that distributors have also remained helpful throughout the process. “Everyone loves the idea.”

Unlike services such as Untappd, which allows people to share what beers users are drinking, Local Suds aims to move people away from Budweiser and PBR to Virginia-based beers: Blue Mountain (Afton), Devils Backbone (Lexington), Hardywood (Richmond), and others. “People are looking to support local projects” said LaBonte. Beer is no different. He said that part of the fun of tasting local beers is “finding the diamond in the rough.” LaBonte said that Local Suds focuses not on craft beer elitism, but on supporting great local beers. He’s not alone.

According to LaBonte, craft breweries have grown at a nearly consistent 15% “year-over-year” rate. That growth has inspired LaBonte and his team to set their goals beyond the Commonwealth. He said the Local Suds platform has been built to move “from state to state,” and they hope Local Suds will one day be used across the country. But in due time; they want Local Suds to be local first. “I’m really focused on Virginia right now,” said LaBonte. While pleased with the new app thus far, LaBonte acknowledged one difficulty associated with service.

The main obstacle is making sure that beers are accurately present in restaurants. For example, a distributor may deliver a keg of, say, Hardywood Singel to 821. Local Suds would inform users that 821 had the Singel. However, 821 may not offer that keg until a week after receiving it, which would make the Local Suds listing inaccurate for a brief time. “That’s the biggest challenge we’re facing,” said LaBonte. He said that Local Suds plans to work with local businesses and distributors to refine the system to make it as accurate as possible. That may take some additional work, but LaBonte is confident that Local Suds can be an important tool for the growing craft beer movement right away. “Let’s build something that’s really helpful to people.”