Batter Up, an initiative that shows Richmond’s best people and organizations gratitude in the form of cakes (see below), gave roughly 200 small homemade cakes to Honor Flight, an organization that provides free travel for war veterans to visit the National World War II Memorial.

Batter Up creator Ryn Bruce delivered the cakes to Honor Flight last Saturday in Mechanicsville before the group took veterans to the nation’s capital.

Here’s a press release issued ahead of last weekend’s gift.

“This is a completely new level for Batter Up. I’m used to baking one cake every week and surprising a person or group with it. The batch for Honor Flight will still be a surprise, but close to 200 small cakes total,” says Bruce. “Luckily I won’t be doing the baking alone–my mom will be assisting and Kitchen Thyme is sponsoring the delivery and giving me complimentary time at their commercial kitchen space the day before.”

Honor Flight, based in Williamsburg, is a non-profit organization established in 2008. In addition to the World War II Memorial, Honor Flight schedules stops at the Arlington National Cemetery as well as the Marine Corps War, Korean War and Vietnam War memorials.

“This one is personal for me,” says Bruce. “I’m doing this delivery in honor of my grandfather, who was not only stationed in Germany during World War II, but was a philanthropist and devoted much of his life to charity. If I could give him a cake, he would be first on the list. This is the next best thing, and I know he’d be proud of Batter Up and its mission.”

Honor Flight is departing Mechanicsville the morning of Saturday, October 19. Cakes will be presented that morning.

Each week for an entire year, Ryn Bruce will surprise one of the many community-minded people or groups in the city with a homemade cake as part of her Batter Up initiative.

“It’s my mission,” Bruce said by phone this week.

A graphic designer, art director for GRID magazine, and part-time instructor at VCU, Bruce had previously yearned for something that would take her out of her “design cell.”

The first ingredient for such a project emerged earlier this spring. One of Bruce’s favorite illustrators, Jessica Hische, was selling several of her pieces. If a customer happened to buy her entire collection, Hische vowed to send that buyer a cake.

Bruce didn’t have the money to spend on a single Hische piece, let alone the entire collection. But Bruce would later have “one of those harebrained ideas that you get at 1:30 in the morning.” She’d offer Hische an alternative payment.

What if Bruce made the cake? And not just one, but one per week. For an entire year. That’d surely get Hische’s attention, right?

She emailed Hische and told the artist of her ambitious plan, in the hopes it would lead to her owning Hische’s pieces.

“Within a day of sending her that email, I started thinking about this,” Bruce said. Really thinking about it. She realized that she didn’t care so much about the art pieces after all. She wanted to bake 52 cakes regardless, realizing it would be fun experiment, and a way for her to finally escape from her “design cell.”

“I think it’s a way to give back to the community,” she said describing Batter Up. “Since I moved to Richmond [in 2009], I really haven’t done anything to give back to [the city].” Batter Up is also about interacting with people face-to-face and not through social media.

“I am a Facebook junkie,” Bruce admitted, assuming she’s not alone. “And I think we’ve forgotten how to communicate with people and connect with people.”

But how would she pick recipients of the cakes?

“The only kind of guidelines I have is that they have to be making some sort of social impact,” Bruce said. “The people have to be doing something that has an impact on their community” whether paid or unpaid.

On July 1st, Bruce launched Batter Up. The first recipients were the nurses at the NICU of St. Mary’s Hospital, which received a strawberry lemon yogurt cake. The next week it was Richmond Fire Station No. 19 who received a chocolate cake with chocolate mint icing.

Bruce said that she doesn’t want to decide the recipients herself for remaining months. She’d like people to nominate those they feel are deserving of cake batter gratitude.

“It’s supposed to be a complete surprise,” Bruce said. Not only does she stun recipients with a homemade cake, she also writes about them on her website. Those who receive a cake don’t need to be life savers, but people doing something as simple as helping to bring the city closer together.

“I had no idea and was completely shocked,” Garbee said via email about receiving her cake. “I was honored because I was already familiar with the program, and it was flattering to feel like all of the work I have been doing was appreciated–especially since my donations to the community are not typically considered charity like rescuing dogs or feeding the homeless.”

Bruce said that most recipients, after being surprised with their cakes, question how deserving they are. “So far, a lot of people have been confused why I picked them.” To her, that just “shows the humility” that unifies each of them, and just maybe the city itself. “I think there’s a sweetness there,” she said. 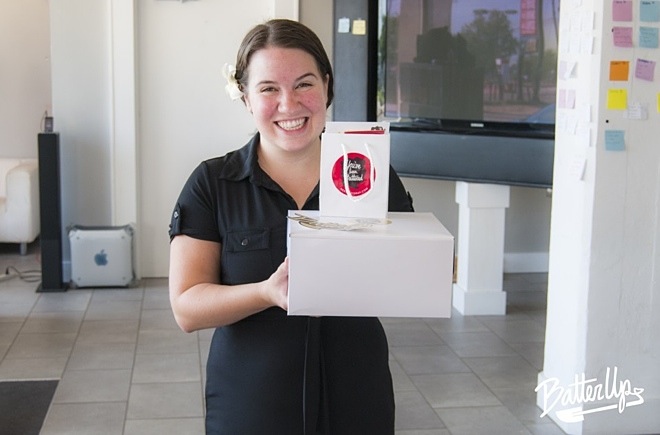 photos courtesy of Batter Up