Just Hit RECord: When JGL came to town as a Regular Joe

Joseph Gordon-Levitt brought hitRECord On Tour to the National this past Wednesday. I build software for a living, I can no longer count the number of Apple products I’ve owned in my life, I frequently suffer hashtag overload, and yet, somehow, I felt behind the curve when Regular Joe, aka hitRECordJoe and more famously known as Joseph Gordon-Levitt, brought his hitRECord On Tour to #RVA and The National this past Wednesday. JGL’s hitRECord is an online community for artists to collaborate. From the hitRECord site:

We use the internet to collaborate with artists from all over the world who form a community around the art we make together. Everyone is encouraged to be a part of the creative process — by ‘hitting the heart,’ joining conversations, contributing your art and remixing the work of others — hitRECord is a world-wide production studio for everyone to collaborate together. 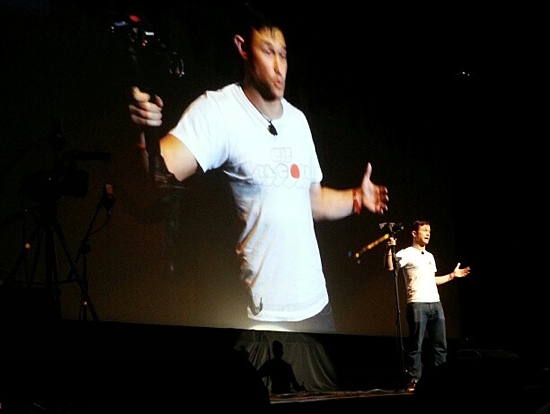 The youthful energy at the National was electrifying as those in the line that wrapped fully around the block kept themselves busy (and warm) RECording their journey and interviewing their linemates. When I finally got inside, that energy was directed towards the stage as the sold-out crowd awaited the appearance of JGL. The lights finally went down, the intro started, and Regular Joe (as he’s known on the hitRECord platform) appeared on the National stage, video camera in hand, and exclaimed “Are we RECording?” The crowd exploded with enthusiasm–even if they didn’t quite know what that meant. It became clear that Joe’s fame had heavily influenced the diverse makeup of the crowd. His youthful charm, movie-star looks, and dressed-down style didn’t make it easier for him to explain the hitRECord site to those who came solely because of his star power. After working past the “wooooos” and “I love youuuss” he eventually described hitRECord.Org, the site he built with his brother after he realized he didn’t want to become just another sitcom actor. He wanted to make a difference, change the world, and based on the number of cameras in the crowd pointed in every direction, he’s certainly on his way.

Right out of the gate he announced that based upon the success of the platform, hitRECord would soon be coming to TV and that those of us in the room would have a role in the show. Joe described the show as a variety show of sorts, similar to Chappelle’s Show or Louie, with live portions interspersed with vignettes; the only difference being “instead of being shot by a camera crew, it’ll be shot by everyone in the fucking room.”

Those worried about the quality of these collaborations should watch this RECord called “The Man With A Turnip For A Head”, as read by Gary Oldman, which premiered at last year’s Sundance Film Fest, or Strawberry Bootlaces, starring Regular Joe. Levi’s also helped sponsor a series of videos that blend the lines between content and advertising, but the advertising remains an afterthought to quality and more a means-to-an-end rather than an attempt to put more money in his pocket. 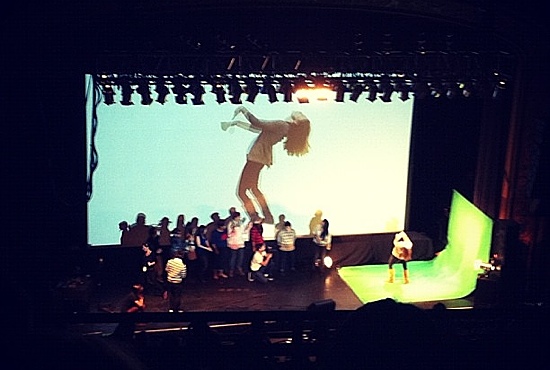 The thing that rang the truest throughout the night was the authenticity of Joe’s drive and vision. As he so bluntly put it, “If I wanted to maximize profits I wouldn’t start an online collaboration site. I’d make horror movies or something.” To put a finer point on it, Joseph explained that 50% of the door ticket cost would go to the artists displayed that evening. I was surprised to learn that a friend of mine in attendance had made $50 on a contribution she had made to an early RECord that ended up becoming popular.

On screen, Joseph Gordon-Levitt delights and amazes. However it’s onstage surrounded by those who share his passion to create, share, collaborate, and dance like no one’s watching that you get the feeling that this is where he can finally be himself (mere blocks from where he spent last fall being someone else). And for the 900 of those RECording the entire thing, you see the power of the platform and the overall digital connectedness that modern technology has provided us.

So, the next time someone shouts “Are we RECording?” maybe me and one of my devices will be ready.

Johnny Hugel is a hopeless multi-tasker who spends many an evening writing about the distractions (across film, tv, comedy and the web) that keep him from focusing on his own projects, as scattered as they may be.