James River Distillery: Local gins are the new local everything else

Each of James River’s three gins—including their new UA Navy Strength—are different, special, and drinkable. They do not choose favorites, but we do. At least once a week, Lauren Millard–our long-suffering Sales Manager, who puts up with the rest of us yelling commands to each other in between bouts of laughing maniacally at our own dumb jokes–pleads with us to do something on the RVA gin scene. Our Local Booze fortnight seemed as good a time as any to humor her. As a gin aficionado, Lauren prides herself on her superior gin and tonics, which were exclusively made with the cucumbery Hendrick’s, until she discovered James River Distillery.

We invited Kristi Croxton from JRD to come give us a taste test. The local gin-maker’s new product, a Navy Strength gin that should not be trifled with, is now available through special order, and she was thrilled to show it off.

Their first baby, Commonwealth Gin, was released only last year–its cantaloupe essence is distinctive and sweet without being cloying. “Gin itself is really just flavored vodka, if you think about it,” says Croxton. The clear spirit lends itself to a wide variety of interpretations, but it’s juniper berries that make gin gin. From there, distillers can add one (or several) botanicals to get the desired flavor profile.

Hendrick’s, which hails from Scotland, uses both cucumbers and Bulgarian rose and is widely accepted as a gin-lovers’ gin across the world. James River produced a worthy competitor with Commonwealth’s cantaloupe and hops (both cascade and amarillo) combination. Neither tastes like pine needles, and no gin should, says Croxton.

Commonwealth’s a regular fixture at bars and restaurants around Richmond, and it’s been known to show up in well-stocked bars in DC and Maryland. When its next sibling, Continental Gin, hit the streets a few months later, gin fans had to make some hard decisions. 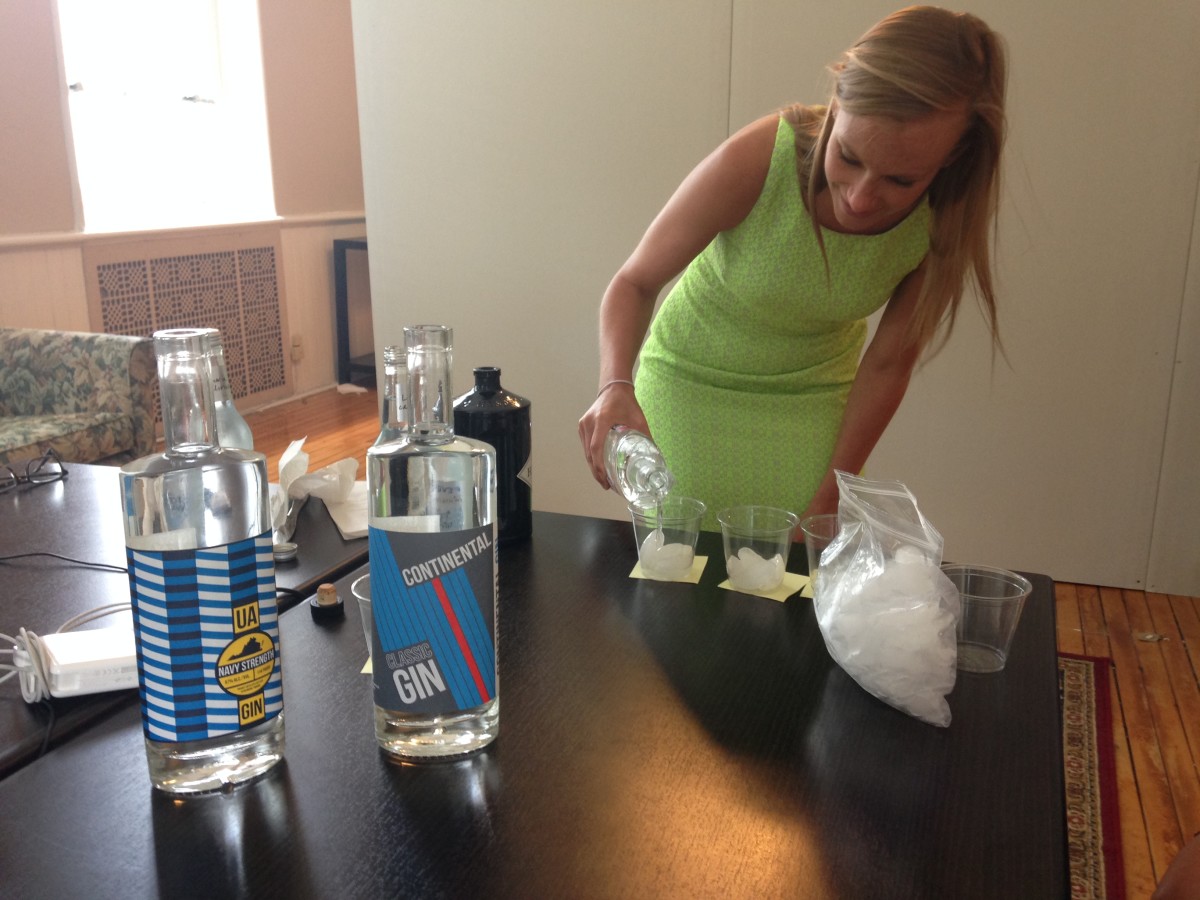 Lauren pours us gin and tonics, as the rest of try to pick our favorites from among Mike Van Hall’s labels.

“Continental is more of a classic London dry gin,” explains Croxton. “It’s more juniper-forward, with coriander and cardamom among the botanicals.” The result is sophisticated, subtle, and complex. Within the same conversation, we referred to both Commonwealth and Continental as “gateway gins,” although they’re both very different. These gateways open wide to accept you into the heady world of gin from whichever direction you’re coming from–American, fruit-fascinated, in-your-face-fun (Commonwealth) or English raised-eyebrow, sardonic-joke-making-chill-session (Continental).

But now, the baby of the bunch, Navy Strength pushes past its two predecessors with a gin that packs a serious punch (114 proof, to be exact). The name has an industry-wide meaning, dating from the British navy’s use of strong spirits to make tonic’s malaria-fighting quinine more palatable as they expanded their empire to foreign shores. Gin, of course, had the added effect of boosting morale.

James River crafts their Navy Strength with ginger, coriander, lime, and orange. “Many higher-proof gins smell like rubbing alcohol,” Croxton explains, letting us sniff the open bottle. “But ours is really smooth.”

Too smooth, maybe. The over-proofed Navy Strength goes down way easy, and it’s easy to see our Friday afternoon spiraling out of control. But it’s so delicious.

We pour out four G&Ts using all three Jamer River gins and Hendrick’s (and Fever Tonic, “OF COURSE,” Lauren told us sharply). Having never tasted any of them, I was the true blind test guinea pig, preferring Continental to the others. My normal go-to drinks are vodka ones–dry without being bitter. Lauren (the Hendrick’s fan) clung to Commonwealth, whereas Ross (the beer and Manhattan drinker) savored the Navy Strength. We all agreed that Hendrick’s was tasty, but we liked our chosen James River gins better.

“We have a true passion for gin,” says Croxton, when asked how she and her partners (Dwight Chew, Matt Brophy, and Jonathan Staples). “And now it’s coming back.”

Though happily beset with craft breweries, Richmond doesn’t boast too many locally made spirits. Croxton’s noticing a boom, which has been good for her business as ABC and the Alcohol and Tobacco Tax and Trade Bureau are now taking more of an interest in smoothing out regulations for local distillers. Perhaps local craft spirits will become as plentiful as RVA craft beers and Virginia wine, with an entirely local cocktail program at our favorite restaurants.

It’s not too much of a stretch to imagine it, but at this point, we’re a few drinks in and it’s a cinch to imagine lots of things.

To try any of James River Distillery’s gins, make an order from your local ABC store or firmly suggest that your local bar carry it, if they don’t already.