You’ve seen the classic film (and if you haven’t, then your repertoire is missing a perfectly good song about snow). Irving Berlin’s White Christmas, starring Bing Crosby and Rosemary Clooney, has spent decades spreading holiday cheer to young, old, and, let’s face it, the very old. And this season, you’re cordially invited to rediscover the vintage spirit at the Barksdale Theatre with, if you can believe it, even more spectacular song and dance numbers than the film’s Golden Era producers saw fit to include.

Bob Wallace and Phil Davis, WWII army buddies who happen to be natural performers, make it big as a song-and-dance act after the war. Bob, the straight man, is skeptical about love, and Phil, the ladies man, can’t get enough. It’s Christmas, 1954, and they’ve had the good fortune to meet a sister act, Betty and Judy Haynes. One thing leads to another, in the most innocent sense of the phrase, and everyone ends up in Vermont rehearsing a holiday revue in a barn.

It’s really a time-honored formula: write a show ABOUT a show, and you automatically have a musical revue on your hands, without all that bother of fitting it too much into the plot. Not hatin’, it actually works really well for this sort of thing, because what the White Christmas audience paid for, dammit, are glamorous costumes, quality dancing, belted songs, and seasonal magic. 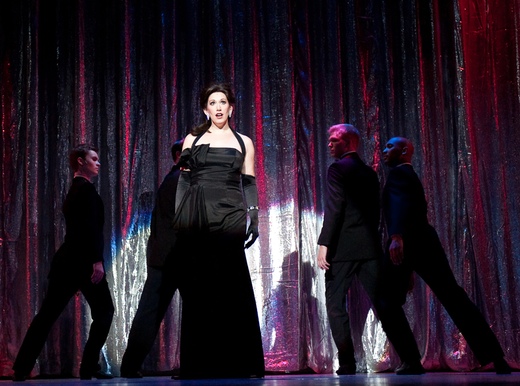 And the Barksdale company and crew truly delivers, from the Fifties-esque holiday decorations (think big colored lights and tinsel) in the lovely Empire Theatre to the luxury of having a live orchestra (directed by Leilani Mork). Kevin Earley (Wallace) and Andrea Rivette (Betty) lead the cast with strong vocals that are particularly apparent in Rivette’s showstopping solo “Love, You Didn’t Do Right By Me” that turns into a touching duet with Earley with “How Deep Is the Ocean.” Maybe it was the stunning costuming by Sue Griffin or the shining Ron Keller set, but that scene, in which a betrayed Betty pours out her heart during her solo engagement at the Regency Room, stayed with me the longest. In fact, the breadth of Patti D’Beck’s direction is epitomized at that moment, when a feel-good romp turns into something that demands to be taken seriously. 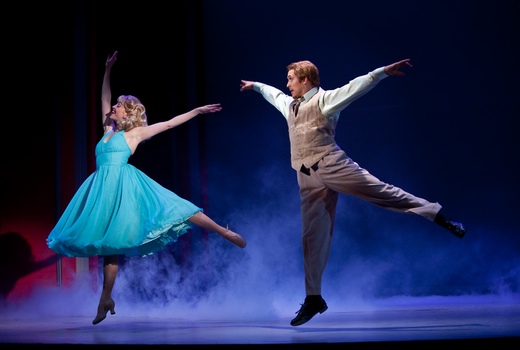 Michelle Lookadoo and Freddie Tyson Kimmel as Judy and Davis

Michelle Lookadoo and Freddie Tyson Kimmel, as Judy and Davis, swept the rest of the show with their energy. With utterly convincing enthusiasm, they exhibit some world-class tap skills during “I Love a Piano” and twirl each other around during “The Best Things Happen While You’re Dancing.” But they leave the scene stealing to the riveting Kathy Halenda, who plays inn concierge and former Broadway belter, Martha Watson. Between Halenda, adorable-but-not-cloying Taylor Richardson as Susan, and Steve Moore as the aged Ezekiel, things really heat up when they company arrives in Vermont. Almost everything out of their mouths had the house rolling, and by the time the grand finale swoops in with the most elaborate costumes yet, you’re so amped up from the jokes, the reunions, the glitter, and the talent, you’ll fall gratefully into the holiday classic to end all holiday classics, “White Christmas.” 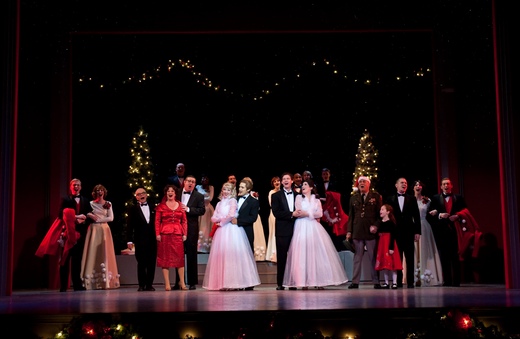 I won’t pretend I didn’t get a little misty, but I sure wasn’t the only one. It’s hard not to; the whole production is a wistful reminder that, in the Fifties, shows were just so dang elegant, comedy was so uncluttered, the clothes, good lord, the clothes. And, with its historic feel and intimate setting, the Empire Theatre is just the place to make the whole thing pop. Aside from a few technical glitches, the White Christmas does exactly what it sets out to do: provide you with a couple of hours jam-packed with holiday festivities. The show’s lone disappointment occurs when the lights come up and it’s time to face 2010 again.

(All photos by Aaron Sutten)