Hugs and hospitality at Max’s on Broad

The owner of the Jackson Ward restaurant wants to dish out more than great meals. Ted Santarella is just looking for a hug.

He wants diners at his restaurant, Max’s on Broad, to feel so
“nurtured,” as he puts it, by food and hospitality that they can’t help but hug him as they leave.

“I feel a restaurant takes on the demeanor of the owner,” Santarella said. “[Max’s on Broad] is an extension of my heart and soul–my desire to please people.”

His 135-seat Jackson Ward restaurant was built on the idea that a restaurant isn’t just a place to tantalize tastebuds, but to soothe the soul. “We’re here to make everyone feel good.” The way he felt as a child growing up in New York City’s Little Italy. 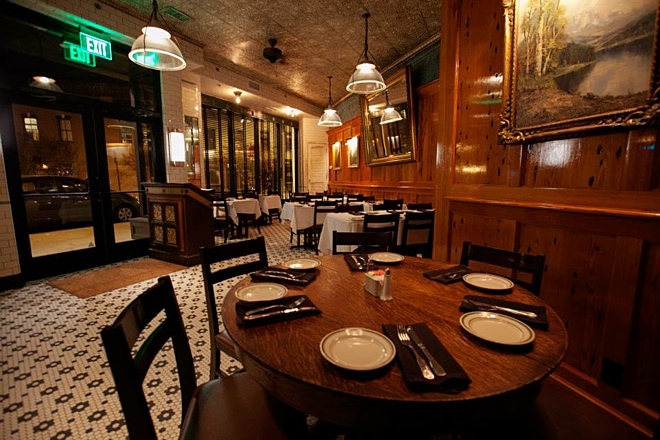 “My Austrian grandmother was a  baker, like unbelievable,” he says–as if he could taste her confections from memory. “My Italian grandfather married a Polish woman who learned how to cook Italian because he was Italian.” The diverse heritage of his grandparents meant Santarella’s childhood kitchen dished out a cornucopia of continental cuisines.

The food was great on its own, but it paired best with family, especially during the holidays. “Grandma would start cooking two weeks before Christmas. It was a very big deal,” he said. “And that feeling of family and love and acceptance…as a child I really, really enjoyed it.” Santarella was destined to spend his entire career in the food business.

Santarella began that career in his early teens at a fish market. Eventually he made it into the kitchen as a line cook at William Shakespeare’s, a British pub in Greenwich Village. “This was before there were convenience foods, so everything was done fresh,” he said, describing a different age of restaurant. “Everything was made to order and menus were a lot smaller.”

The aspiring chef felt at home inside the pub’s kitchen. “Most of what I learned, I learned there,” he said. “Sauces, soups, handling of food, and just [the] general taking care of the customer.”

In 1981 his employer shipped him down to Richmond to help launch a West End restaurant. The city’s restaurant scene was just a morsel compared to the bounty in New York City. “Most of the dining experience was in country clubs…,” he said about Richmond in the early 1980s. “There was Buddy’s and there was Tobacco Co. There were a few places in Shockoe Slip and that was it…all these Fan bars serving chef-driven cuisine was unheard of.”

Santarella was one of the chefs that exposed local diners to more upscale, extravagant cuisine.  “We offered some fresher ingredients, some things I had seen in New York, things that really hadn’t come to Richmond yet,” he said. Some Richmonders weren’t sure what to make of the food that was migrating  south. “We served red lettuce and people thought the lettuce was bad,” Santarella said. “They’d never seen red lettuce before.”

In addition to working in the kitchen, Santarella bolstered his resume tending bar and waiting tables. His 40-plus years in the industry made him better than most at knowing what made a successful restaurant.

In 2006, he put his knowledge to the test when he opened Tarrant’s Cafe at 1 W. Broad Street. Tarrant’s averaged just five customers a day when it opened and functioned with only one full-time employee. It’s since expanded, now serving 3,000 people weekly and employing 100 people. Its expansion over the years, as well as the opening of Max’s on Broad in 2013, validates Santarella’s approach to service.

That approach is contagious. “The staff takes their cues from the management, from the owner,” Santarella said. “So if I act like I give a damn, they’re  going to give a damn…People will come out to eat, they’ll come to see you, they’ll come to your restaurant if you take care of them,” he said.

You do that by first creating cuisine that not only reads well on the menu but that the kitchen can live up to. “[At some restaurants] the chef’s ego is on the menu and the ability for the chef to carry it out, along with everything else that’s going on in the kitchen,” doesn’t work, Santarella said. “There are too many people doing that chef-driven, farm-to-table-ego-maniac, too-many-ingredients-on-the-menu type of stuff,” he said. “I think there are more restaurants doing that than” there’s a customer base for.

Max’s menu, while extensive, remains simple because Santarella has the final say on it: “The menu is food that I like.” From the Belgian beer-braised short ribs cooked for eight hours ($27) and the waterzooi of rockfish, lump crab meat, leek, and baby yukon potato ($32), the menu is at times extravagant, but achievable for the kitchen day after day, week after week.

Some call Max’s menu new Belgian cuisine, some a modern Brasserie. “French bistro pub food is the best way I can explain it,” Santarella said.

But restaurants don’t endure on good food alone. “Food is subjective. Someone likes a hamburger; someone else is a vegetarian,” Santarella said. “But everyone knows good service.” And that good service must come from good people. “I hire people who I feel are nice,” Santarella said. He can teach someone how to cook, bartend, and wait tables. “I can’t teach people to be nice.”

Santarella’s approach to hospitality goes from the people to the physical environment. He spent roughly $1 million renovating the building that Max’s occupies, as well as funding the construction of a new building attached to the existing one. 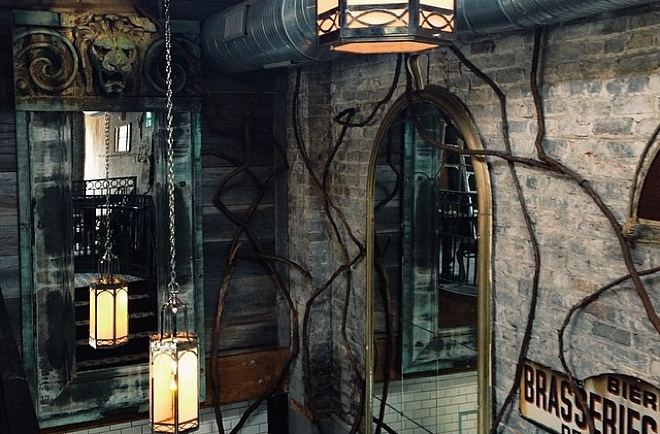 Inside the restaurant, the first floor’s wooden walls evoke a warm, upscale tavern. A massive mirror inside a lion-carved wooden frame (transported from New York City) gazes down the restaurant’s staircase. Upstairs, the wood floors gently creak, giving the feel that the second story is a French bistro magically placed inside a Richmond loft.

“It’s [in] the building, it’s in the experience, it’s in the attitude  of the servers; the way we greet people at the door,” Santarella said. All of those things are examples of how he’s coalesced his restaurant acumen into a unique place that pairs with a unique menu, giving diners a unique experience in Richmond’s ever-crowding restaurant scene.

From Tarrant’s growth over the years, to Tarrant’s West that’ll likely open in the West End in September, to his most recent success at Max’s on Broad, Santarella is the epitome of a successful restauranteur. But money, while necessary, isn’t the currency he values most.

He prefers to deal in hugs.

Max’s on Broad is located at 305 Brook Road.