Coffee slingers competed in front of a packed house this past Wednesday at the third RVA Barista Jam. All chairs were full and there was standing room only as nearly 15 competitors tried to take home the top prize.

Coffee slingers competed in front of a packed house this past Wednesday at the third RVA Barista Jam. All chairs were full and there was standing room only as nearly 15 competitors tried to take home the top prize. 1st place won $50 and major bragging rights. Second place won $20, and third place received a gift certificate to a local business.

Globehopper Coffeehouse & Lounge was a big winner this time, with manager Kimmy Certa taking home first place. Former barista there, Elliot Lau, took third. Second place was given to Michael Albrecht of Lamplighter, who despite being the last contestant to go in front of the judges (and we were all quite full of milk and espresso at that point) still wowed us. 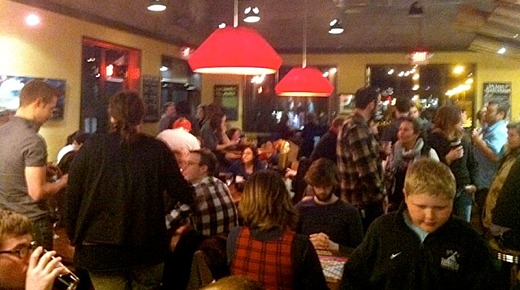 Judging was done by me, Alan V. Smith, roaster and barista from Lamplighter, and Maya Vincelli, otherwise known as @brawlingbarista, a member and organizer of the River City Roller Girls team. We examined an espresso course and either a latte or cappuccino. Judging was based on consistency and persistence of crema, milk/espresso balance, creativity, presentation, and attention to detail.

Contestants represented multiple coffee shops in town and even included a few freelance baristas. Attendees enjoyed winning several prizes from a $1 raffle. Raffle proceeds ended up being around $100, which was donated to the Central Virginia Food Bank.

Ellwoods Café hosted us, and did a fantastic job keeping the crowds happy with food and drink. I was especially impressed with my Chesterfield sandwich ($5.99), which was secretly and delightfully their take on a banh mi. Thinly sliced chicken was paired with pickled vegetables and cilantro, all on a perfectly crispy baguette with a side of kettle chips.

RVA Barista Jam organizers hope to have several more events soon, including coffee education classes. Anyone with feedback or ideas to help improve the next event should contact rvabaristajam@gmail.com.