Seth Gordon’s Horrible Bosses hit theaters this past weekend, and the world just kept on spinning. No surprises in this one: a weakly comedic romp during which things go from bad to worse more quickly than you can say, “The Hangover 3.”

Horrible Bosses is a clear attempt to capitalize on the success of The Hangover. That is, a group of adult men (played by Jason Sudeikis, Jason Bateman, and Charlie Day) have a talent for ruining everything they touch while they fumble around town in a near-constant state of sexual panic. The themes are what you think they are, there’s no point going into that, so it’s the jokes that need to be reviewed, right? They’re mildly funny and occasionally actually funny, all delivered with much better comic timing than were those of the same ilk in The Hangover. You’ll see critics calling it a “raunchfest,” which always surprises me, as I didn’t find anything too shocking about the usual litany of dick jokes.* 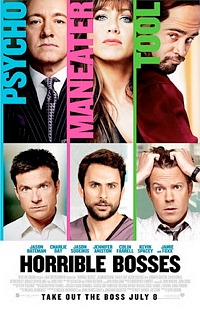 Well, that’s not quite true, I did find it quite shocking that sexual harassment, sexual assault, and sexual violence were vehicles for jokes that produced uncontrollable giggles from the teenage dudes behind me.** Charlie Day’s character, Dale, who has clearly never seen Disclosure and therefore doesn’t know that you can win lawsuits about this kind of thing, has the misfortune of having a sexual predator for a boss. His friends don’t really see the problem, because this sexual predator is a hot lady (Jennifer Aniston, an actress whose considerable talent has been wasted on dippy romantic comedies due to so much tabloid exposure that she can’t be taken seriously anymore). “But I’m engaged!” Dale protests, and his friends reluctantly agree that this is somewhat of a stumbling block. She’s then earmarked for destruction, of course, as are the bosses of the other two (Kevin Spacey and Colin Farrell, who both do a pretty impressive job of being evil assholes).

But, the world being what it is, white dudes need help from black ones on certain topics, like crime. Jamie Foxx meets the trio of idiots at “the most dangerous bar in town” (populated by black dudes, many with — and now’s a good time to cover children’s eyes if they’re reading — tattoos) and exploits their palpable racist terror to give them some sound advice: “Something or other.”

While the jokes are better than their counterparts in The (Golden-Globe-winning) (!!!) Hangover, according to yours truly, they’re still largely forgettable. As in, I can’t remember them. And recalling those late 90s/early Aughts comedies (see footnotes) has sent me down a rabbit hole of nostalgia. Was it just because those were my own teenage years that I thought Adam Sandler and Ben Stiller flicks were so much funnier? I still remember lines from Billy Madison and Zoolander, but I can’t tell you one memorable moment from a movie I saw last night?

It’s naive to think that those movies weren’t also based on a formula that was chosen because of its ability to make money. And I’d like to think that even though films like Horrible Bosses dwell on the same irritating things that everything else in the massively popular genre does, I can still give credit where its due (good directing and acting all around, folks, with the exception of Charlie Day, who abused his high-pitched panic thing far too often). There’s just good, clever comedy,*** and then there’s this movie. And that’s the end of that.

*I interpret this to mean that I’m either younger and more desensitized to grossout stuff, or because I haven’t forgotten Freddy Got Fingered, American Pie, or even There’s Something About Mary. Ahh, the turn of the last century! When we didn’t shy away from a liberal use of bodily fluids!

***”But where can I see these good, clever comedies?” you ask. My friend, we are in a sad situation here in RVA. My options for new movies that would still be new when this review was published were as follows: Larry Crowne, Transformers: Dark Side of the Moon, Bad Teacher, and the above snoozefest. If you’ll hearken back to the excitement surrounding Movieland’s grand opening, we were promised a steady stream of independent films. Yes, it’s summer, and the options are slightly slimmer, but I’d venture a guess that this goal has dropped off somewhat. And is it their fault? Probably not. We don’t go see enough of them. Theaters book what will make them money, and we want to see Transformers in 3D. And we were all so worried about Westhampton’s imminent demise! So my answer to you is this: go see what you can, rent the rest, and take full advantage of the movie selection in larger cities when you’re there.