GWAR, Me, and the On-rushing Grip of Death: Part 52

An Oderus is born! 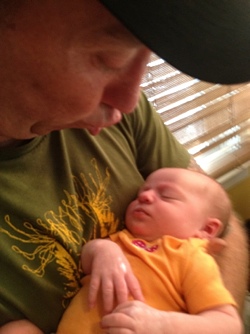 Brockie prepares to hawk a loog.

We are happy to announce to the world that little Corie Smoot is amongst us! That perfect little creature (beneath the horrid large one), the daughter of our brother the late and great Cory Smoot and his lovely wife Jaime, is at this moment crawling the Earth in her endless quest for milk! I should know, she kept trying to suck my tit! Even babies hit on me.

I can’t tell you how much we appreciate all the love and support you sent and continue to send to her and her Mom–she’s a perfectly healthy little baby girl, and Mom is doing great too. Cory would have been very happy and relieved that she looks more like Jaime. Her face is kinda Cory from mid-nose up and Jaime from that spot down. Flattus Minimus lives!

OK, let’s get with the program!

Episode 52: An Oderus is born 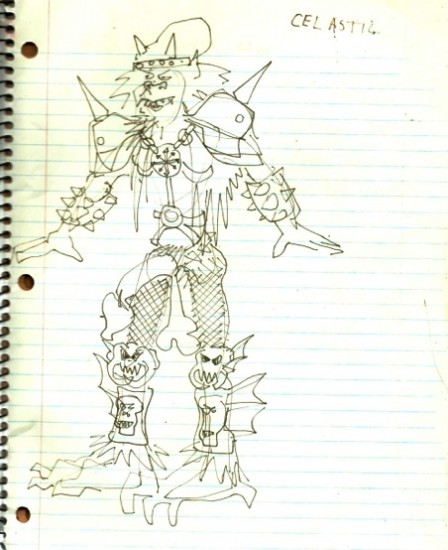 It was during the period after Hell-o that we took our first steps towards establishing the characters that have lasted ever since. Above is an early sketchbook rendering of how I envisioned Oderus in 1989. If you look at that crude-ass drawing I scribbled some twenty years ago, you see pretty much the same Oderus as you see today–but it took a few years to get there. Also, I have no idea what the word “celastil” means, unless it was a lame attempt at spelling “celestial,” which it probably was. The drawing is certainly less than celestial, marking an early (and crude) attempt at establishing Oderus’ look as he came out of his “big floppy head” years.

My friend Ignatius the hat-maker made the “big floppy head” for me out of leather. At that point we hadn’t learned that any material we used on the costumes had to be as water-proof as possible. The floppy head soon was a sodden, rotting mess. Every show it got drenched with sweat, plus we would fill it up with noodle bags (baggies filled with melted egg-noodles and food dye). They were a pain in the ass to make but made for a good brain-eating scene. The bags would pop and coat the inside of the floppy head which would then start to rot. It was obvious a latex solution was needed.

Sleazy and Chuckles powered much of this latex change-over, and slowly latex and molds took over from cloth and glue. Gone were the endless electric knives we used to carve foam, or the hot-wire contraption we would use on hard foam (the kind that emitted cyanide gas when cut with the hot wire). Clay forms and molds were the order of the day. Of course Muscle blew us all away with his mold-making skills, and we did our best to ape him.

These were the days of throwing down, of chugging “glugs” and smoking “wizzie,” of listening to Iggy or Slayer or whoever was playing across the street that night. And these throwdowns led to the genesis that took the old hockey-pads and cloth-and-glue look of the costumes to a whole new level. Having some of the best young artists in town around me didn’t hurt either. So we set about imprinting Oderus hoping he would have a real connection with the fans and therefore a lasting relevance. And the first thing I needed to do was make his visual image powerful and unique.

Oderus started simply. I wanted him to remind people of the devil, plain and simple, and the devil in that very medieval, monastery-wall way. Another big part of his look came from a 1950s movie I was crazy about called Mark of the Demon (or Curse of the Demon depending whether you got the European or American cut). It’s a great film about a sorcerer that kills his victims by summoning a horrible demon. The sorcerer lets the demon know who to kill by putting a slip of runes in the intended victim’s pocket. Well, the hero gets the drop on the sorcerer and manages to slip the runes into his potential murderer’s pocket, which brings the demon who claws out his chest. The face of the demon is super intense—a slobbering, steaming, pig-horned hellion from which I gladly lifted the look for Oderus’ face. 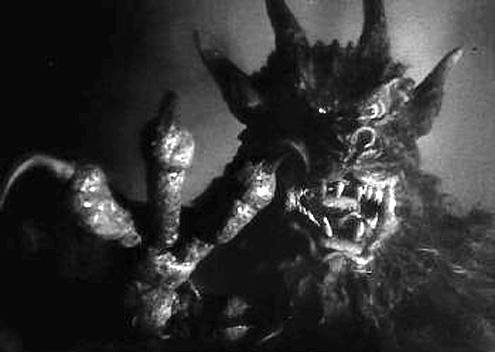 The original Oderus was just a suit of straps with fiberglass spikes all over them. Techno had made them as a part of the very first set of suits. There was a fake-fur codpiece and that was about it. A little later Techno carved up the famous “Kaiser-pads,” and we attached them to the straps, and the basic look was born. As my construction skills slowly grew, I started buffing out the costume, adding the big three-toed feet (identical so I wouldn’t have to make two molds) then the shin and knee-guards. Of course I made them poorly and usually the stuff would fall apart after a show or two.

But with introduction of the five-gallon buckets of latex (which we ordered from Canal Rubber Supply Company in N.Y.), we finally had access to the product at a reasonable price. For years we had been buying one-gallon containers of the shit at the Art Market (or “Art-Mark-Up” as we called it) and cutting it with water endlessly. Now we could make really big things and really go crazy on the costumes. In quick succession Oderus got his devil-faced shin-pads, his spiked wristbands, and his rubber clawed hands. Those in particular took a long time to learn how to make and it wasn’t until we actually made a mold of my hand that we were able to make a good pair.

The “big-floppy head” went into storage, and Oderus became a pig-lord. I can’t quite remember if I had the cock first or if it was ProtoSlave–I think it was him and I built mine out of jealousy. By then there were a bunch of dicks and asses hanging out. As a final flourish I added the fish-net stockings of Frank N. Furter, but rolled them down over my butt. That was it! That’s Oderus! And I have done him that way ever since. It’s just now the costume is, like, a million times heavier.

So after a brief time spent repairing and re-building, we began to prepare for the biggest year yet. Right off the bat we were headed to Mardi-Gras again, and this time we were gonna get custom t-shirts made. But much to our dismay the shirts came back with the words “Party-GWAR” instead of “Mardi-Gras” on them. But a mere printing snafu wasn’t going to stop GWAR. The little red light on my answering machine kept going off, and, increasingly, the messages I was getting were good. Everybody wanted us to come trash their club!

After our little “Party-GWAR” jaunt was over, we began booking our second coast-to-coast tour, and this one was going to dwarf the first one. I think it was the first tour that ever had a name, “Death Tour”, and it was called that with good reason…because doing such a tour would kill most people.

A big stop on the Death Tour was at the upcoming New Music Seminar. Yes, that’s right, the same New Music Seminar they used to have in New York every year. It was a pretty big deal, like the SXSW of its day. We were supposed to have played it the year before but got cancelled because of some bullshit bill…this year we were invited back for a headlining show at the Rapp Arts Center with our buddies Blitzspeer. To make matters even more interesting a bunch of labels were calling, and one day MTV rang up. Kurt Loder wanted to interview GWAR at the Seminar.

I was gonna get so much pussy!

NEXT: Things get dirty as I describe random sex-acts!