GWAR, Me, and the Onrushing Grip of Death: Part 31

Dave Brockie is back to continue his story of how GWAR became, well, GWAR. This time he tells us about the band getting ready to record their first album and the introduction of the material that changed everything: latex. 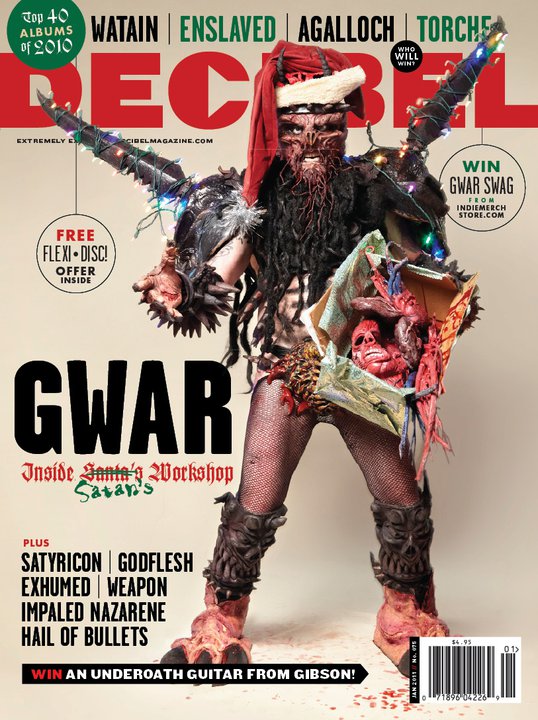 It’s been a busy time for your favorite group of swaggering undead warlords. Here we see my alter-ego, Oderus Urungus, gracing the cover of the new Decibel Magazine! It’s the perfect capper for a year that has seen GWAR savage the world in an unrelenting assault, appearing on everything from the shores of Australia to the Jimmy Fallon show (and he was a bit stand-offish; Dana Carvey was way cooler). But enough of the bullshit, I am actually going to write about what I am supposed to for once!

Shimmy Disc records was a New York-based, fairly obscure art-rock label that flourished briefly in the mid-to-late eighties. Honestly, I had never heard of any of the shit (like King Missile, Crackhouse, Bongwater and many more), and didn’t really like it when I did, but my buddy Rebby (that’s an example of someone already having a nickname) turned me on to it, urging me to send a video tape to it’s founder, the semi-legendary producer Mark Kramer, (we could never really come up with a good nickname for him, unless you use “The Pot Jew”, which I will…). Within two weeks we had sorted it out; we were going to New York to record a real album.

But first we had to write it! As it stood we only had about eight songs, and in those punk rock days that was nowhere near enough. The first true GWAR song was “AEIOU”, (we started with the vowels), and classics like “Rock and Roll Party Town” were soon to follow. And for our first couple years of being infamous local jokesters we stuck with the hits like “Üaintshit” and “As Pure as the Arctic Snow”. But this was a whole fucking album, and back then 16 to 20 songs on an album was not uncommon. We had plenty of work to do.

As the band settled into our new practice space at 801 W. Broad to begin the task of writing the rest of the album, the art department began setting up a new Slave Pit and reabsorbing old member Techno. Considering how much things had changed in the year he had been gone, that was gonna be interesting. Techno had never played well with others. And that made it hard for him to accept the fact that GWAR was a group effort. GWAR, in his mind, was always “his baby”, despite the fact that GWAR never would have been GWAR unless tons of people had contributed countless hours to it. It was that environment that had driven Techno away and one that had become our credo in his absence. I wondered how he would deal with it.

The guys had stepped up in his absence. I will always credit Sleazy with making two of the biggest innovations that brought GWAR out of the “stone knives and bearskins” era, or as we used to call it, “The Dim Time”, and into the future of a real, working rock and roll band. Sleazy was the new Hetman at the Slave Pit and had earned it with good deeds. I held him, and still do, in high esteem. The first was The Chernobyl Cockroach, the first Slave Pit prop to be made of latex rubber. Latex had many advantages over the traditional cloth and glue covering technique that made the backbone of those first generation Slave Pit costume pieces. Latex was flexible and bounced back to form (more or less, and dependent on several conditions) after being crushed. And getting crushed was an inevitable occurrence to any Slave Pit prop, whether it was getting slammed by a giant hammer onstage or thrown into a giant pile in the back of the Golden Battle Barge after a show. It was more expensive to be sure — back then we used to buy it for 70 bucks a gallon at The Art Market (or “Art Mark-up”, in Slave-Speech). Sleazy cut that shit with water and carefully doled out every drop to the hide of the creature whose body, 25 years later, is more or less intact, somewhere in the bowels of the Slave Pit costume loft. Latex would go on to replace the old ways completely, and we scrambled to learn the ways of this weird new material. I would smear latex mixed with flesh-colored paint all over my face, and then decorate it with cigarette butts and Corn Flakes. It looked pretty cool, even though it would sweat off after the first song. I was so ignorant of the capabilities of the stuff that I just poured it into molds I had made (poorly), where it would just skin over and never dry. Many times I recall the pained recriminations of my Slave Pit fellows as they witnessed me wasting hundreds of dollars worth of materials. But Sleazy and Sexy and The Muselman put the shit to good use. Rubber pieces replaced old ones, and soon Sexy had a new mask for a brand new character he was creating. Our old buddy Spike had played a character loosely known as “The Executioner”. He had stopped hanging out with us, and Sexy had taken over the role. He changed it into “The Sexecutioner”, and added the famous headpiece. In its most basic form, it looked like he’d pulled a sack of raw meat over his head. I was madly jealous, and started to think about a similar upgrade for Oderus.

Latex had the extra plus of looking hard but not being so. I’m not saying that getting slammed in the face by a rubber mace feels like getting hit by a pillow, but it was a big improvement over a rock solid lump made out of wood glue-soaked strips.

The second and even huger development that Sleazy brought was that of spew. We had fucked around with blood at shows, much to our folly. It’s how we had gotten banned from the old 9:30 Club. Our shit was pretty primitive, just some sandwich bags filled with Karo-syrup. It was sticky and gross and limited in range. It ruined fun fur and was impossible to clean up with anything less than boiling water. I don’t know where he got the contact, but Sleazy had an alternative called Karogeenan. It was a food additive made out of seaweed that came in these five gallon tubs filled with a colorless, odorless gel. When cut with water and food coloring, it looked exactly like blood, and even better, it dried up and flaked off on its own accord. It’s the perfect blood and to this day I don’t understand why people don’t use it as such more often. But Sleazy wasn’t done. He had pioneered the “spew” with the Arm-Rip gag, in which a hapless stage tech got his arm pulled off, and then, thanks to a hidden hot water bottle and some tubing, squirted a jet of blood across the stage. But then he got the brilliant idea of using old fire extinguishers to propel the blood. A “decap” would stumble out, look stupid, and then get his head knocked off by The Sexecutioner. But instead of a half-hearted water bottle squirt we now had hydraulic pressure—and our famous spew, much to the chagrin of club owners everywhere, was born!

But that in itself brought dangers…not so much for us but for our fans. One night at one of the original Rockitz shows, Sexy knocked the decap head deeply into a packed house. That’s right, we used to knock the heads into the audience rather than into the backline. And we also used to use plywood when we made them (the old ways died hard), which led to plywood decap meeting drunken fans face at considerable speed, which led to a deep cut and lots of blood, which led to the dubious tradition of our fans never suing us for sometimes hurting them very badly.

Yes, we had made great strides since Techno had departed, and upon returning, I am sure the Slave Pit little resembled the one he had founded years before. And I think maybe we had forgotten that none of this ever would have happened without him. Probably the hardest thing for him to take was the emergence of Sleazy taking over the role of Techno–Destructo…even though we let Techno be Techno again. We merely claimed he had a not-so-identical twin brother that went by the same name. But the damage was done. Sleazy had been doing it for the last year, and he was tapped to sing “Techno’s Song”on the new album (actually “Hell-o” was in the can by the time Techno returned. In this sprawling epic, there are bound to be some mix-ups).

Of course back then I was my usual clueless self about any hard feelings Techno might have had. I was oblivious of the deeply rooted problems and on to the fun stuff. Maybe if I had been more aware I could have done something, but I doubt it. People are the people they are and usually nothing can change them. Techno settled into his first project, building the “Death Bulldozer” that Oderus was to ride on the cover of the new album, which at that point was being called “Hell-o!” I was happy, writing songs like “I’m in Love With a Dead Dog”, and getting ready for my trip to New York. For the moment, everything was happy-time in GWAR Valley. And that lasted right up until the moment we played our new album for the rest of the guys.

Wow, I still didn’t get to New York! It’s like when I start writing this stuff I start remembering so much shit I never get as far as I would like. Ok, in two weeks I’ll be back from tour, and ready to hit you with episode 32 of “GWAR, Me, and the On-Rushing Grip of Death”, and this time it definitely will be about recording “Hell-o”in New York with the infamous Pot Jew!