GWAR, Me, and the Onrushing Grip of Death: Part 30

Greetings and welcome to all the faithful fans, friends, and followers that have followed this tormented tale for 30 episodes. It’s often rushed and sometimes skipped, but writing these chronicles has proven to be a modest success thus far, at least as far as that I have not abandoned it out of laziness or frustration. 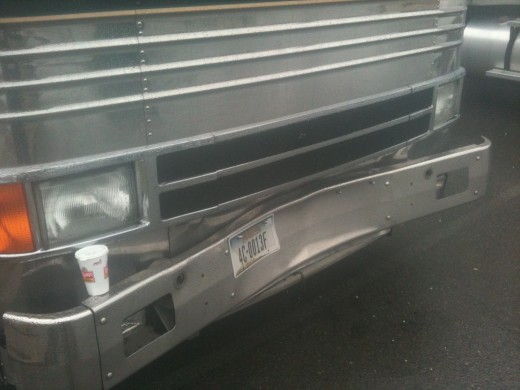 We’ll start this episode with a contest. See if you can answer the following question. Late one night, the GWAR bus hit:

3) Something that emitted a hideous scream, then thrashed off into the bushes, leaving behind a puddle of steaming blood and a half-full Wendy’s small coffee, which somehow ended up perfectly placed on the bumper.

Greetings and welcome to all the faithful fans, friends, and followers that have followed this tormented tale for 30 episodes. It’s often rushed and sometimes skipped, but writing these chronicles has proven to be a modest success thus far, at least as far as that I have not abandoned it out of laziness or frustration, which knowing myself as I do, was originally my biggest fear. But new concerns have replaced old ones. The column has gotten harder to write now that I am through with the pre-GWAR years of my life. It goes from being a one-man debacle to an outlandishly crafted attempt to tell the stories of many people, and how they came together (while circle-jerking into a soapdish) to make GWAR. Out of respect to them, I really want to make a decent attempt at getting the facts right. Ok, enough of that, let’s get back to the half-truths, rumors, and outright lies that make this column great!

That’s why I have brought in the services of Blobby, my long-time and stalwart Slave Pit colleague. He has always been known, in the GWAR vernacular, as “The Recorder”, the guy that serves as the repository of all things GWAR-related, from original tape spools to obscure articles. His compendium of the majority of GWAR events and timeline of all the shows has been an invaluable resource (and his ruddy cheeks are to this day a source of great amusement for me). So 30 episodes later we are still going strong — and we haven’t even got to the first album yet. I am hoping that this “Internet” is around for awhile because I am thinking I am not going to get done writing this thing anytime soon.

First, the general GWAR update. Right now we are about 1/3rd of the way through our “Bloody Tour of Horror”, messily crushing the moistest regions of America under our clawed (and flaming) hooves. Then it’s off to Australia and New Zealand to molest the minds of those dwelling in these exotic locales, despoil their livestock, and perhaps violate a hobbit. Busy, busy, but never too busy to keep up with my journalistic commitment to keep this city from being completely overwhelmed by the demented peckings of that Chris Bopst character! So let’s get on with it. Welcome to the 30th episode of…

GWAR, Me, and the Onrushing Grip of Death:

I stood there with the phone to my ear, scratching my balls with my removable pirate-hook. The voice at the end of the phone finally stopped talking. When it was done, we had a record deal.

It hit me! We were going to New York to record an album! This was the perfect way to get into the pants of the hot waitress that worked next door!

I skated over to the Slave Pit and then went to the pizza pub next door where the object of my lust was usually working. Confirming she was there with a surreptitious peek, I then bust into the place, run right by her (being careful to completely ignore her) and slid up to the pay phone. Here I made several phone calls to imaginary people who I loudly blabbed to about our new record deal, our exclusive producer, and how I had set up everything, all the while making sure she heard every word. Then I sat down and had a couple celebratory beers, chatting her up in the process and suggesting we hook up after work. We did, and I ended up at her apartment, where we had messy sex for at least several minutes.

“So this is what it’s like to be signed,” as thought to myself, as I rudely pawed at her undergarments. As soon as I had blown my load I realized I had yet to tell any of my band mates the good news — that we had been signed, not that I had blown my load.

“Gotta go to New York, baby,” I blurted out as I leaped out the window, barely pausing to go through her purse, denude the fridge of beer and food, and take the nicest bud out of her weed stash.

But the band was not the only entity that was getting ready to travel. At this point Techno had been gone for about a year or so. Sleazy had taken over the character of Techno-Destructo and was pretty much our lead man in the shop. As far as I knew there were no hard feelings, but I think we all were pretty disappointed Techno (oh that’s right, I said I was going to stop with the nicknames. Well, I lied…) had left us. His departure was more of a surprise than anything, and we had not let it slow us down one bit — in fact GWAR had been kicking ass with no sign at all that losing our co-founder had been a bad thing. We had rebuilt the costumes, re-tooled the band, and now we had a record to make. GWAR’s rumblings were spreading across the country, so much so that Techno began to hear them at his new job as a security guard at a Ford plant in far-off Detroit, where he would spend hours drawing the catwalks and machinery that were his new environs. If I thought his departure was a surprise, boy, was I in for a surprise when he returned!

One day I was standing on the porch of my Spine Street (better known to the world as S. Pine) abode, waiting for the Weed-Wolf to wake up and get me high, when my attention was drawn to a giant cloth and glue robot stumbling down the street. Towering over all but the biggest ghetto-palms on a pair of five-gallon bucket feet, I was confronted by the onrushing figure of Techno-Destructo, screaming at me in that “viking redneck” accent that only the co-creator of GWAR and original creator of the Slave Pit could muster.

I was astounded and amazed! I had heard vague rumors that Techno was considering returning to us, so I wasn’t completely unaware that this could happen. He was hating his job. He had come back to do some video with us and it was high-fives and dick-rubbing all around. The door was wide open for him to return, and we would welcome him…and suddenly there he was, clomping drown the street in his robot suit, ass hanging out, screaming what I could only vaguely understand as the surreal nature of what was happening drowned out everything in a wash of gurgling background noise.

Out of nowhere, Techno was back…but was that a good thing?

Next up, I swear to God I will actually write about recording our first album! But right now I have to rock the house with my dick hanging out!