A fat drop of ice cream slides down the side of a waffle cone, landing on my thumb. The taste is sweet, tropical, and somehow both familiar and exotic. The flavors are reminiscent of a creamy rice pudding, with a hint of curry. The savory element works beautifully, in no way distracting from the overall sweetness, rather providing a depth to the perfumy coconut. It’s Curry Coconut, one of Gelati Celesti’s three newest flavors.1 It’s fun and complex, an apt metaphor for Gelati Celesti as a business–a time-tested combination that relies on a keen sense of balance.

The ice cream, which has a high cream content and as little air whipped in as possible, mimics Italian gelato but is in fact, good old American ice cream with a uniquely richer texture. Master ice cream maker Erik Robertson has been with Gelati Celesti for 18 years. He and relative newcomer Gene Raymond crank out nearly 180 gallons of ice cream a day from their production facility off Dabney Road. 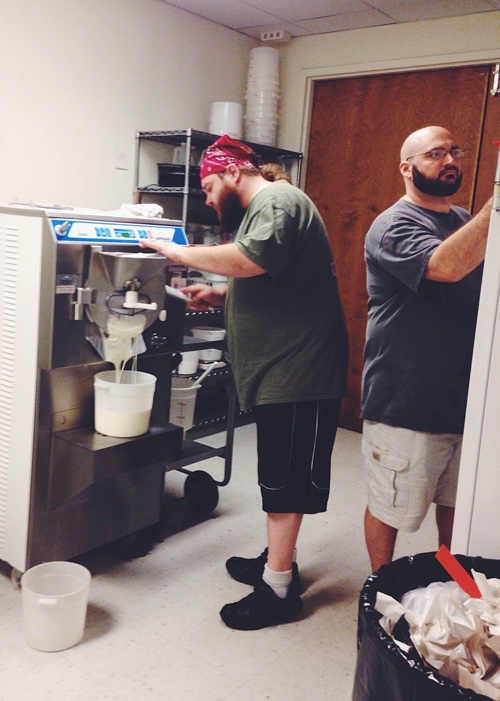 And when I say ‘production facility,’ you may conjure images of a huge warehouse, batch freezers churning away, workers in labcoats and hair nets, etc. It’s not that. It’s a front office, a dry storage room, a 10’x15’ room with two (soon to be three) batch freezers, and a walk-in freezer; plus an ample loading dock. It’s Erik and Gene, making ice cream all day, five days a week; Steve at a desk in the front, on the phone with wholesale clients and suppliers. It’s utilitarian, and it has to be, to keep up with the 120 complete inventory turnovers Gelati Celesti has each year. From such an unassuming building comes an impressive array of flavors: Mint Chip, Salted Caramel, Pumpkin Ginger Snap, Blanchard’s Dark as Dark, and over 90 other flavors, in a rotation of 36 at a time.

“When it comes to the flavor development, we try to have fun back here, so it starts as a joke,” says Raymond. He laughs: “It started out with us talking about mashed potatoes and gravy and turkey. From there, it’s just brain-storming and pulling ideas out.” Rosser adds that they learned much of what they know about combining sweet and savory elements from developing their Spicy Hot Chocolate flavor, which blew up a few employees during the testing phase and was quickly tweaked to provide a subtle but noticeable heat.

Gene chimes in, “It’s like throwing darts you know–out of every ten, you’re gonna hit a bulls-eye, and that’s exactly what happened.” He says development typically takes a week, two at the most, of trying different variations of spice and garnish until they find the perfect combination: “After that, it’s just a matter of taking what we already know, adding something to it, and just trying to find the right balance.”

With a strong background in business and the desire to buy and grow a local company, Steve Rosser was the obvious choice for friend Peter Edmonds to sell Gelati Celesti to in 2010. Steve’s executive experience with companies like Luck Stone and Reynolds Metals gave him the goods to take a small business to the next level. Steve oversees manufacturing and wholesale operations, and he’s the “business development guy.” Steve’s wife, Kim oversees the business’ three retail locations and dozens of employees, a tireless job she does gracefully and with obvious talent. “I will always be a mother to young people,” she tells me.

Kim describes a birthday ritual at the company: Upon hiring, Kim asks new employees to write down three words describing themselves and three they think their friends would use. When the big day arrives, Kim runs over to For the Love of Chocolate and picks up a gift and a card, in which Kim and coworkers write those words and their own words of praise. “It’s the little things,” she says, “that make people feel appreciated.”

Since Peter Edmonds and his father, John, started the business in 1984, Gelati Celesti has been and remains a family business and not just the families that have owned the company. Steve and Kim take great pride in treating their employees and customers well. Short Pump store manager Emma Wolff elaborates, saying, “This is a really special place to work. Everyone works hard, and everyone pitches in. Coming from a corporate background, that was really surprising and great to see.” Both Kim and Steve acknowledge that it’s impossible to keep everyone happy all the time, but say that open and quick communication is the key to keeping their growing staff satisfied.

Steve’s vision for the future of Gelati Celesti is one that sees continued growth, but exactly where or when is yet to be determined. He answers with a laugh and a shrug, saying , “We’re not sure…The most important thing is we want to enjoy what we’re doing, and we want our employees to have a great experience while they’re here…The numbers are secondary. But we do believe that growth is essential–that’s what offers our employees opportunity. So we will always continue to grow, and that is very, very important to us.”

The Rossers, who own property on the Eastern Shore, are considering taking Gelati Celesti to a Tidewater market when the time is right. “But for right now, we’re busy with our new store. The Bon Air store and the West Broad store are very important to our company as we’re opening the new store. We want to make sure we don’t lose focus on those. And we love our wholesale customers. We want to be sure we’re doing a good job servicing them as well.”

As for working together as husband and wife, Steve and Kim, whom I interviewed separately said almost exactly the same thing, which I found absolutely charming and genuine: Trust. Trust…and distance. Steve explains, “We’re not together all the time, which I think is important. The great news is we align perfectly with the vision of what we want the company to be. There’s always total agreement. Naturally, we have different points of view on some little things from time to time, but we trust each other.”

He says making time for life outside of the business, including visiting their two twenty-something daughters, is essential: “The challenge with this is disconnecting the business from our personal life from time to time. When you own a business, there never is a complete disconnect.” Steve says they try to be self-aware and guide conversation away from work during their time alone together. “Business is important and we love it and have a blast with it, but we try to keep balance in our lives.”