Garden Wars! It is back! Our yearly gardening competition returns with fresh new faces ready to crush their opponents into compost. Voting begins now!

Garden Wars! It is back!

Nearly a year has passed since over one hundred people weighed in to elect Richmond’s ultimate gardener. And, sadly, like a kids’ soccer league, we decided that everyone’s a winner, and ended up with a three-way tie. Which, let’s be honest, is kind of disappointing.

This year we’ve designed an impenetrable system of rules and regulations to prevent such a filthy tie from ever occurring again. Allow me to explain:

So: vote every week, elimination every other week. Now! On with the show, and leave your votes below! 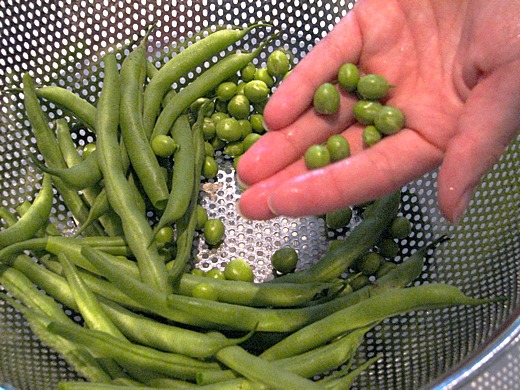 This year I planted a plethora of goodness: lettuce, green beans, beets, carrots, peas, tomatoes, and hot peppers. But here’s the deal: I PLANTED SEEDS ONLY. That’s right…none of those pre-grown, store-bought plants. We’ve already enjoyed some of the beans and peas, as my wife demonstrates here. By the way, did you know she is a famous author? 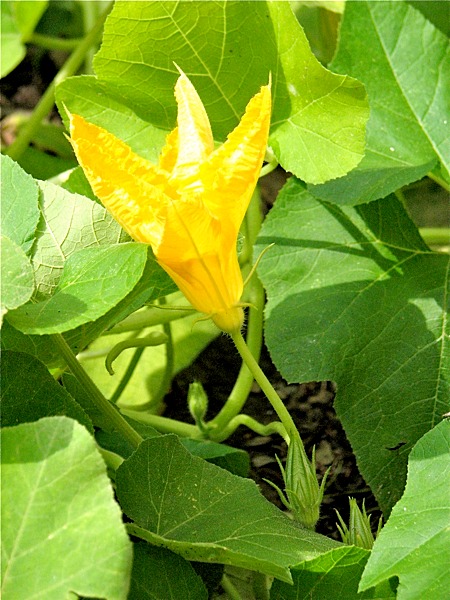 This is a squash blossom from my garden. You’re probably thinking, “Wait a second, he didn’t plant any squash.” Technically, that’s correct. However, last year, we had a compost pile that consisted primarily of vegetable scraps. After letting this compost “marinate” for several months, it became the perfect topsoil for my garden. And apparently, it included seeds from last year’s vegetables that are now growing in my garden. IT’S A GARDENING MIRACLE! I have approximately 10-12 of these magical squash plants. 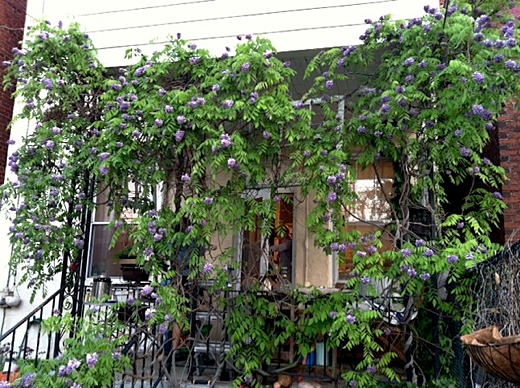 This is my Byrd Park back porch, as seen from my garden (notice Karen hollering out the back door for me to come in). Usually, I’m unconcerned with ornamental plants, because I only value edible flora–“food not lawns” is a motto of mine. But, these two wisteria vines have literally become a part of our household. They may actually be supporting the weight of the back bedroom at this point. Plant some wisteria and it will sleep, creep, and leap–in that order–in exactly three years. And then, you’ll have a shady spot to drink your morning coffee behind a canopy of gorgeous grape-like clusters of purple flowers. 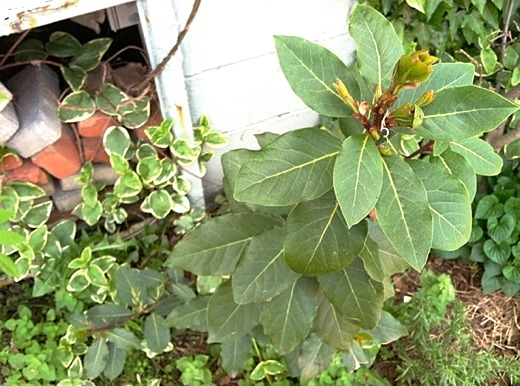 At the foot of the back porch sits my herb garden and, jumping up to greet you, this bay bush. Although only a few years old, it’s teaching me a valuable lesson: prune!. It got to be as tall as I am with no branches to speak of. Just this spring, I begrudgingly lopped a couple feet off the top to be dried and used later. Now, new growth is coming in. Eventually, it will become a bushy tree, requiring a bonsai sculptor’s touch. Fresh bay leaves, added fresh to stock or a pot of rice, give a HUGE floral zestiness–to be applied carefully. 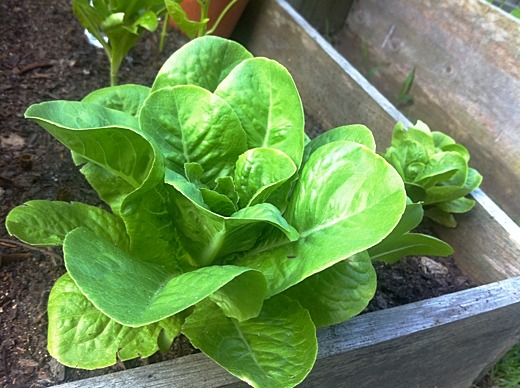 The spring crops are now dying off to make room for the delicious summer crops! Here’s the last of our romain lettuce which will DEFINITELY be returning in the fall! 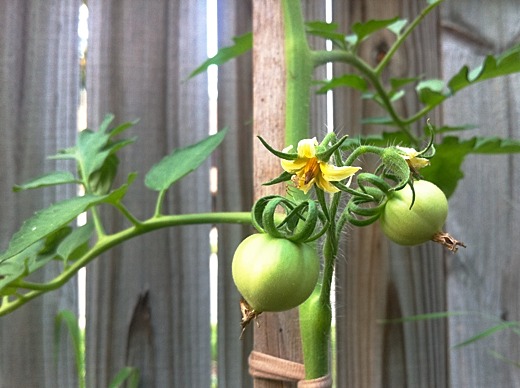 Here is one set of tomatos from our FIFTEEN plants. This photo nicely shows the newly formed tomatoes, fruitless flowers, AND a little itty bitty spider protecting our garden. 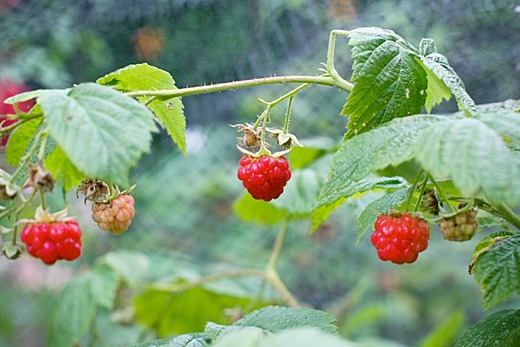 Berries! Guys, berries!! AND we grew them. The fact that this actually grew from dirt in our backyard still amazes me. 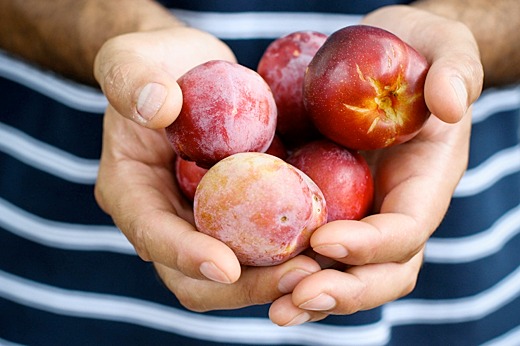 Once the plums started coming in, and actually turning into ripe, delicious, edible fruit we about lost it. We probably lost way more plums than we actually ate, but these guys were absolutely delicious. Fruit this week, veggies next! 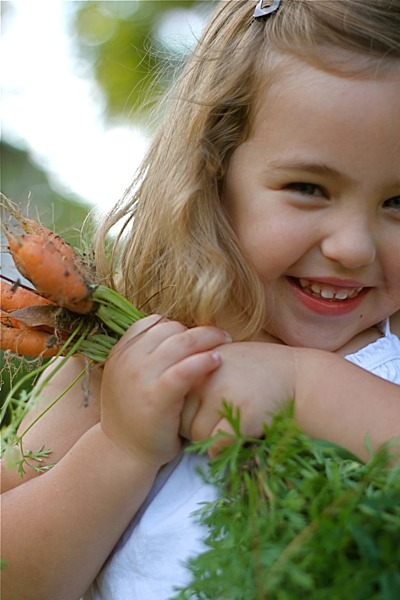 We pulled our first carrots on Sunday and this was a revolutionary moment of enlightenment: Lily Jaymes exclaimed, “You mean they were in the ground this whole time?!” 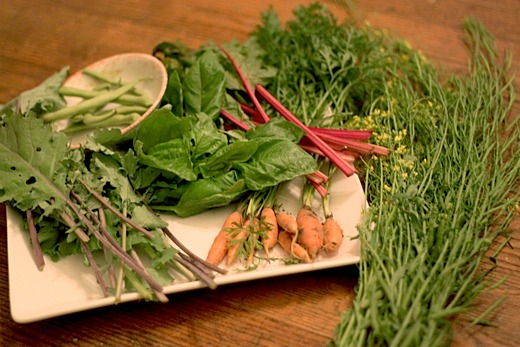 We only plant what we like and we only harvest what we eat – the evening’s take – rhubarb, lettuce leaf basil, russian kale, broccoli rabe, carrots, and the only green beans I could wrestle away from my daughter–also the only ones that have made it inside so far this season.

There are 126 reader comments. Read them.