Founding Fathers is back once again to give a Richmond dad a place to reflect/opine/wax poetic about a fatherhood-related topic of his choosing. Today, local dad Ryan Smartt talks about his family’s experiences with In Vitro Fertilization.

Sure, the dads occasionally contribute to Raising Richmond, but the conversation there tends to leans more towards the maternal perspective. That’s where “Founding Fathers” comes in. Each month, we’ll be giving a different Richmond dad a place to reflect/opine/wax poetic about a fatherhood-related topic of his choosing. Today, local dad Ryan Smartt talks about his family’s experiences with In Vitro Fertilization.

About five years ago, my wife Elizabeth and I decided to jump into the scary, exciting world known as parenthood. We’d been married for a couple of years, so, hey, why not? Everybody’s doin’ it (no pun intended…actually…pun intended).

Our assumption was it would only take a few months of trying and PRESTO…the next Smartt would be on his/her way. After 11 or 12 months without success, we went to see a fertility doctor who basically told us we needed to try “In Vitro Fertilization” or IVF.

I’m not going to lie. This was not easy news to take at first. Why did this happen to us? BILLIONS AND BILLIONS of humans have been born using the old reliable method, so what did we do to deserve this treatment? Why us? It’s not fair. Why us? WHY US?!

Oh, and also, IVF ain’t a cheap proce$$ either.

But mostly, we didn’t know who to talk to about our situation. Elizabeth and I always look to our family and close friends for difficult advice; however, we didn’t know anyone who had been through this and could empathize with us. Nothing felt normal, and to be honest, we were a little embarrassed. So we decided to keep it a secret at first. We felt like we were all alone. I even got depressed.

I also tend to internalize problems, which usually isn’t very healthy. Elizabeth became a little more open about what we were going through with her family and friends, but I didn’t. And guys, I don’t advise keeping everything to yourself if you’re in the same situation we were in. In fact, I would suggest seeking out other IVF parents or support groups. You’d be surprised how many are out there.

With the initial shock behind us, we did our best to move on. What we both decided was that we are two unique people. We’ve had unique experiences in our lives. Heck, it’s amazing we even met in the first place. How many people from Wichita, Kansas (me) and Richmond, Virginia (her) have met in New York City and decided to spend the rest of their lives together? None would be my guess. How many people have spent their wedding night in the ER? (Long story). How many people have written a book about their family history. Essentially, we thought if our personal journeys haven’t been the norm, why would it be any different for our first child?

After coping with the difficult emotions, we moved on to the physical issues of the IVF process. To put it in simple terms, here’s how IVF works: the doctor literally combines several sperm and eggs to create as many embryos as possible. Sounds pretty easy, right? Yeah, not so much.

Without going into too much detail, collecting the sperm is the easy part. But the doctor had to “extract” Elizabeth’s eggs. Going back to 8th grade Sex Education Class, you might remember that women release one egg per month. But the IVF doctor needed several in order to increase the odds of successful fertilization.

So how does one extract multiple eggs? Women actually have hundreds of eggs available, but in order to release several of them for the IVF process, you have to “trick” their bodies by injecting hormones to help release more eggs. It had to be done every day for several weeks. This meant I had to inject a variety of shots into Elizabeth every day for several weeks. Fun! (Or not fun at all.)

Our doctor extracted the eggs, and then combined them with the sperm to create the embryos — a total of about 16. Then he took the “best three” and re-injected them back into Elizabeth.

The first two times didn’t work. So we had to do it again. Which, of course, took a few months. The stress, the physical pain, and the emotional pain were a lot to handle. Something else to think about: we injected three embryos each time. There was a chance we could have twins or TRIPLETS. For those of you who don’t know her, Elizabeth is a tiny person. How could she physically handle being pregnant with more than one baby? How could we handle dealing with two or three miniature humans after they’re born?

Jumping ahead to June of 2006. We went to Germany for a family trip with Elizabeth’s parents and her youngest sister to search for their family roots (this is also a chapter in AN AMAZING NEW BOOK.) The morning of the day we went to the tiny town where Elizabeth’s great-great-great- grandfather (who immigrated to Richmond) was born, I went to the pharmacy and purchased a pregnancy kit, which I had never done. I don’t speak German, so I looked up the word “pregnancy” and “kit” and wrote them down on a piece of paper. When I got to the pharmacy, I gave the piece of paper to the pharmacist, she smiled, and she showed me where the kits were. I was very nervous, and for some reason, I also decided to buy what I thought was some toothpaste (which actually turned out to be denture cream… oops.)

I got back to our hotel, Elizabeth peed on the stick, and we waited. For what felt like and eternity…

A dark pink line showed up, and we didn’t know what it meant, so we looked at the instructions, which were in German. There were two options: “schwanger” and “nicht schwanger”. And according to the stick, HOLY SHIZZLE she was REALLY schwanger. But first we had to look up schwanger in our dictionary. BOOYA! You can imagine our excitement when we saw what it meant.

Nine months later, baby Lyla came into our world. She had the sweetest, tiniest, cutest little cry I’ve ever heard. (Her crying is not so cute anymore, BTW.) But Lyla truly is a miracle. And despite the ups and down we’re experiencing with her, I always take a moment each day to think about how lucky we are to have her.

Elizabeth and I look back on our time before Lyla with mixed emotions. The initial shock of what we faced. The physical and emotional strain of IVF. The euphoria of being schwanger. The birth of Lyla. And now we’re asking ourselves…do we want to go through all of that again? Could we have another miracle baby without going through the IVF process?

Throughout this journey, I’ve realized that life doesn’t always happen the way you want it to happen. You have to adjust, you have to make decisions, you have to call audibles, you have to find ways to deal with the cards you’re dealt. You have to rely on the support of family and friends. And many times, it ain’t easy. But you know what? If you can find a way to work through the difficulties, the rewards are great. 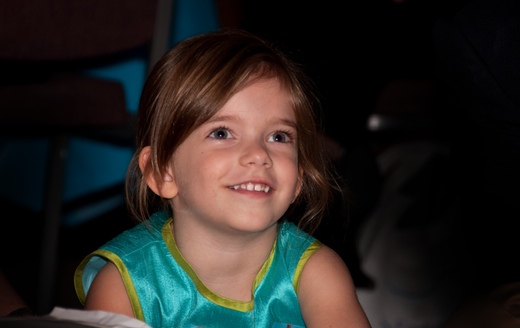 During mornings, nights and weekends, Ryan Smartt spends most of his time cooking for his wife Elizabeth (a famous author), and chasing around his daughter Lyla and pug Deacon. During the day, he’s a communications guy at Capital One. He’s also obsessed with his garden, bacon, the Kansas City Chiefs and the Kansas Jayhawks. To learn more about all of the above, you can follow him on Twitter at rsmartt.