Whoa, “shakeries” is totally going to be a word, we bet. Dutch & Company’s owners Caleb and Michelle Shriver and Phillip Perrow are quiet about when their new spot, Stroops, located across the street from Dutch & Co at 2709 E. Marshall St. will open its doors. They’ve been down this road before, and they’re in no hurry to make promises they can’t keep.

But, when the pieces are all in place, the paperwork is finished, and the team is finally ready, Perrow says, they’ll be serving up some standard sausages including classic frankfurters, corn dogs, breakfast sausage, bratwurst, and a changing rotation of seasonally-inspired dogs like the ones they’ve been selling to devoted Saturday crowds for the past few years.

“We’ll bring back some favorites, make a few tweaks, and add a few new things,” says Caleb Shriver. The RVA dog, with pimento cheese, fried green tomato, and either a fried softshell crab or crabcake, will be a regularly-featured dog. Shriver describes a dog they designed with Halloween in mind–The Vlad the Impaler dog, a morbid mix of blood sausage in a bloody butcher cornmeal crust, dressed up like Mexican street corn.

Waffle fries and side salads will also be on the menu, so you can turn your dogs into a legit meal. The dogs will be between $5 and $10, depending on bells and whistles. And what would Stroops be without Stroopwafels? Disappointing! There will be stroops, stroopwafel ice cream sandwiches, and potentially even pints of vanilla ice cream with stroopwafel scraps for you to take home and enjoy to completion in your own judgement-free zone.

Shriver says they’ll work on making their own standard toppings, like sauerkraut, mustards, and chili, “because everybody needs to have a chili dog.” But the plan is to start simple. Chef de cuisine Paul Winston will oversee much of Stroops’s daily operations, with the Shrivers and Perrow guiding the way. Stroops’s hours will allow Caleb and Phil to have their eyes and hands on whatever needs eyeing and handling in the first few weeks.

The interior, with styling direction from nearby Era Vintage owner Diana Matthews, conjures a high-energy diner vibe with bright yellow walls and a total of 12 seats–eight at the window and a four-seater booth. Perrow says the design was inspired by the space itself as well as pieces like the upholstered Johnny Rockets barstools and deli case.

More than two years ago, Perrow and Shriver were stuffing sausages after the Friday dinner rush, exhausted and wondering what exactly they were doing. They had no idea it would lead to its very own business, which Caleb Shriver points out, is actually two businesses. He describes the kitchen at Stroops as “open,” with a charcoal grill and a visible station for prepping orders. There’s no space to make the kind of sausages they’ll be serving there, and the kitchen at Dutch & Co is busy being Dutch & Co’s kitchen. So Stroops’s sausages will all be made at a USDA-inspected kitchen facility in Scott’s Addition. That’s two businesses!

Stroops’s hours aren’t set in stone yet, but Michelle Shriver says it will be “lunch to early evening,” most likely five days a week to start. But, she adds, “this is such a new concept for us. This is not what we’re used to. We want to make sure we’re doing it right.”

Starting tomorrow, October 23rd, the Robinson Theatre (2903 Q Street) will host free bi-weekly “Food Heritage Month” cooking demonstrations with personal chef Gabrielle Tenney and other local chefs. The demos are part of a Ford-Funded grant project to increase access to fresh food in areas that have been designated as “food deserts.”

According to Tenney, the program’s creator, “Food heritage month is about opening the conversation up about food and culture.” Each week, chefs will prepare dishes inspired by different cultural influences. Tenney is starting close to home this week with Mexico, her own cultural heritage. The demonstrations will be followed by a tasting. Tenney says, “We will show our guests how to prepare a healthy and budget-friendly dish, and then we will enjoy it together. We will be spreading the word, to Church Hill juniors and seniors specifically, about a cooking competition coming up in the spring where contestants will feature a recipe inspired by their heritage. Contestants will have a chance to learn cooking skills, entrepreneurial skills and win cash prizes.” 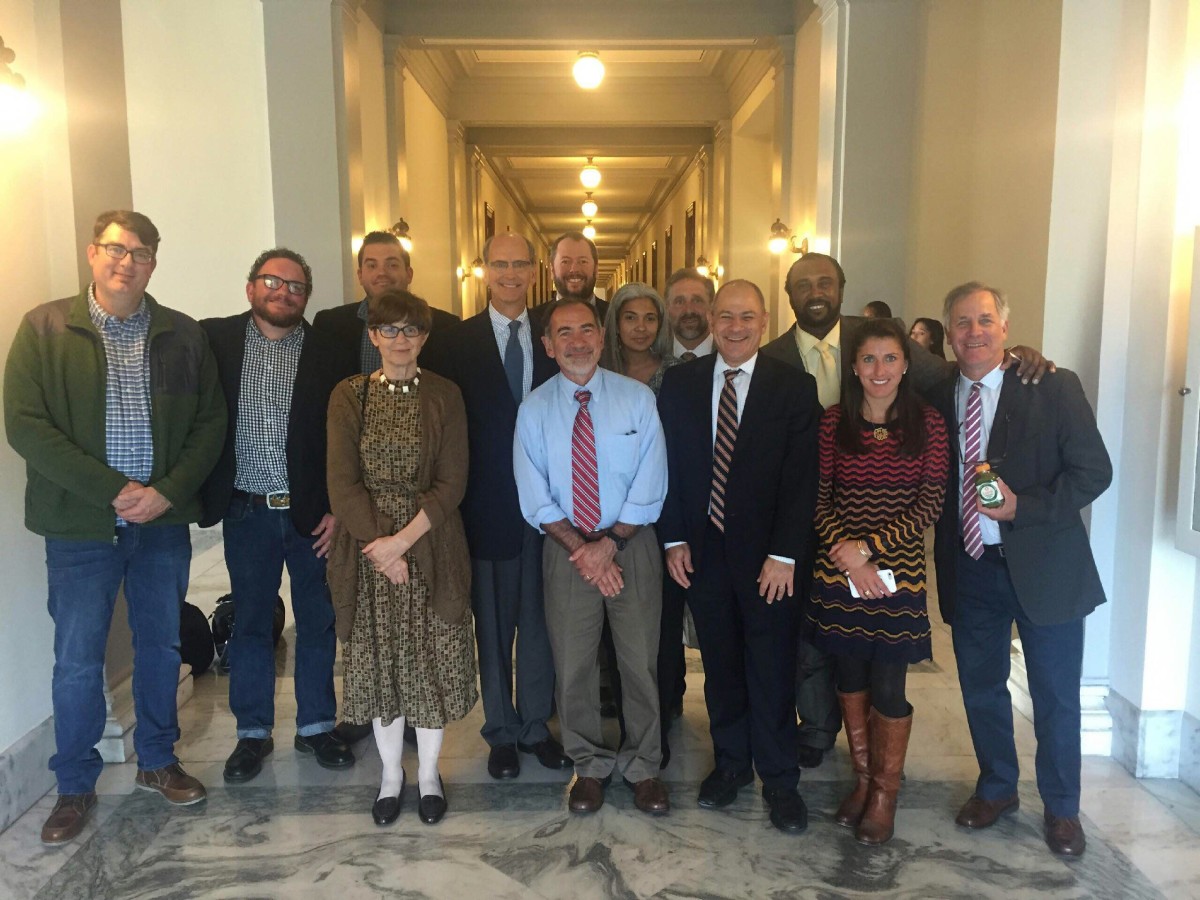 Photo by Be a González.

A group of Virginia chefs and business owners took a trip to Capitol Hill this week to make their voices heard (and hear the voices of others) on the issue of GMO labeling. Joe Sparatta, Lee Gregory, Jason Alley, Rick Hood, and Shane Emmett (representing Heritage, The Roosevelt, Southbound, Comfort, Pasture, Ellwood Thompsons, and Health Warrior, respectively) joined senators Mark Warner and Tim Kaine as they listened to lobbyists from Just Label It describe the effects of what they’ve dubbed “The DARK Act,” which stands for “Denying Americans the Right to Know,” also known as the Safe and Accurate Food Labeling Act of 2015, which has made it through the House and is currently in front of the Senate.

For Heritage and Southbound chef/owner Joe Sparatta, the experience was enlightening and inspiring: “It’s not about stopping GMOs,” he says. “It’s about having transparency as far as consumers are concerned, asking for a label on the foods we’re buying so we know if they’re GMO or completely free of them.” For him, stopping the DARK Act isn’t about ending genetic modification of foods, he says. “It’s not about changing farming processes; it’s just protecting agriculture and informing consumers. GMOs will probably be around forever. Sometimes they’re a necessity; sometimes they’re not,” he adds. “But you should know what you’re feeding your daughter, and I want to know what I’m feeding my son and my guests.”

CAN I GET SOME FRIES WITH THAT SHAKE

Your dinner-and-a-movie options are soon to increase around the Bowtie Cinema on Boulevard near Scott’s Addition. Eat Restaurant partner Chris Tsui announced that they will open Boulevard Burgers & Brews at 1300 N. Boulevard early next year. The neighborhood spot will focus on the aforementioned burgers and brews, plus milkshakes of both the adult and child variety.

Carytown real estate waits for no man, and the former Mezzanine spot at 3433 W. Cary already has a proud new owner. In about a month from now, owner Andrew Friel and Chef de Cuisine Sam Hall will introduce Carytown diners to their menu of comfort classics, with a focus on grilled cheeses, at Home Sweet Home. Richmond Magazine has a sneak peek at some menu possibilities.

SAVE THE FEST FOR LAST

Keep Oktoberfest going all the way until Novemberfest with one last, “Prost!” this Sunday at Metzger Bar & Butchery’s Oktoberfest Beer Dinner. They’re pairing five courses of cabbage-y, apple-y, autumnal, ginger-spiced, German-inspired food with Devil’s Backbone beers for $60 per person. Reservations are available throughout regular dinner service, so you’ve got all night to lift your steins to the motherland (assuming you’re of German descent)!

Chicago chef Jason Hammel talks about the value of food and food service in a great Lucky Peach long-ish read.

Our ravenous appetite for pine nuts might just ruin a precious ecosystem. ARE YOU COOL WITH THAT!?

When I was in junior high and high school, I was certifiably obsessed with Dave Matthews Band. OBSESSED! And now that I’ve told all of you that, I feel like a huge weight has been lifted from my shoulders. Anyway, I’ve moved on from jam bands to jammy red wines, and the 2013 Painted Red from Matthews’ Blenheim Vineyards is just that. It’s a rich, barrel-aged blend of grapes including Petit Verdot, Syrah, and Cabernet Franc; and it’s just right for sipping while listening to, you know, whatever you’re into these days.

James Lum tells me that the Jeff was the first sausage recipe the JM Stock co-owner ever created. So, clearly, Lum knew sausage success early in the game. This smoked pork sausage has huge fall flavors, specifically a bourbon apple butter, thyme, and caramelized onions. Try serving your Jeffs grilled (I used a grill pan even though it’s still perfectly decent grillin’ weather) over a mix of roasted brussel sprouts and root vegetables.

Lattes, espresso, and cappuccino, oh my! Thanks to @lamplighterroastingco for our training today! Starting Wednesday bright and early (7:00 AM) come by for your daily caffeine fix! Our baristas Toby and Mary will be waiting for you! #rva #coffee