There’s a recipe for Beast Mode Deviled Eggs buried under all this news. The RVA Food Collaborative (formerly the Capital Region Food Collaborative) launched its website this week. The group, which formed last summer, includes representatives from organizations such as FeedMore, Shalom Farms, Tricycle Gardens, the Institute for Public Health Innovation, Renew Richmond, and Bon Secours, among many others. Basically, a bunch of people who do good work for the community all day meet on their off time to do more good work for the community–but this time for free.

The group meets quarterly to discuss and collaborate on food system issues like reducing hunger and improving food access across the region. The website, designed by Richmond’s own Mediapond, will help satisfy one of the group’s biggest goals–communication. In a city that’s chock full of farmers markets, nonprofits, and innovators; this is a huge undertaking. The site’s message boards will encourage open dialogue about ongoing projects, grant opportunities, and specific community needs.

Sunday night’s Elby Awards at the VMFA were sold out and rowdy. Flasks were full, and hosts were hoisted. People took the Studio 54 theme very seriously, and everyone’s hair looked amazing. Forget what I said last week about pajamas. In fact, I might start an online petition to get everyone to dress in “late 1970s” all the time, and then you can sign it and get emails about “late 1970s” things every day for the rest of your life no matter what you do. Aren’t online petitions awesome!?1

You can read a full list of award-takers here, but here’s the big news: Heritage took the shoe for “Restaurant of the Year” AS WELL AS the award for “Best Dressed Restaurant at the Elbys” (which I made up), thanks in large part to Emilia Sparatta’s fur-glitter-legs combo, Rachel Boxley’s maroon jumpsuit, and Michael Verner’s magnificent afro.

Sugar Shack Donuts put us all through a rollercoaster of emotions this week with bad news followed by what sounded like bad news but was actually perfectly acceptable news with a fried chicken donut on top to make it all more palatable. Here’s the short version. Sugar Shack Coffee, located on Main Street downtown, will close indefinitely for a rebrand while the company focuses its efforts on the re-awesome-ifying of its flagship location on Lombardy.

Richmond’s own Parks and Rec department is putting on a weekly speaker series that would make Leslie Knope proud. The six-week series runs every Saturday from February 14th to March 21st and is, amazingly, free to attend. Topics include organic gardening, economic opportunities in urban agriculture, raising urban chickens (the thugs of the chicken world), beekeeping, composting, and preserving homegrown foods.

“I’m excited for the first class when Sean [Shepherd of Backyard Farms] and Duron [Chavis, director of Virginia State University’s Indoor Farm] will talk about all the businesses that can be started around urban ag,” says Community Garden coordinator Vicki Campbell. “It may be a fantastic outlet for people with felonies that are barred from employment…It’s a great series and we always make some fabulous new friends.”

If you’ve got food cart dreams, Tarrant’s has news JUST FOR YOU. They have awakened from their own food cart dreams and are selling their fully operational rig on Craigslist. Here are the foods I would most like to see served from this cart, in no particular order: pierogies, falafel, steamed buns. If you start a food cart that serves pierogies, falafel, AND steamed buns, congratulations, you just met your biggest fan.

Team USA did the country and long-time Bocuse d’Or supporter Chef Thomas Keller proud yesterday, taking home the silver medal in what is probably the most grueling, tedious culinary olympics in the world, reports Grub Street. This beats Team USA’s previous sixth place record considerably and raises the stakes for next year in a way that I’m sure these chefs are already sweating over. If this news makes you say to yourself, “I want to learn more about Bocuse d’Or,” read this book.

To be honest, I often find it difficult to discuss the subject of women in the food industry. Something Gabrielle Hamilton said in Blood, Butter, and Bones has always stuck with me and made the whole discussion feel sort of crummy, in a Holden Caulfield way. That doesn’t mean I haven’t done it. But it was tough. Is it feminist? Is it not feminist? Can’t we just put our heads down and cook without making such a big, weird deal of our gender assignments? But stories like this one from the NY Times comes up all the time, and a part of me really enjoys reading it. I’m all “You go, girl!” but quietly.

This quote from the article sums it up nicely: “While she and others appreciate the North Carolina sisterhood, they don’t really like talking about it. ‘I’m excited for a time when it’s not a woman doing something,’ she said, ‘but it’s just somebody doing something.'”

I love this story. I’m not sure how I feel about its place in food journalism in more of a theoretical sense, but it’s a great story; and I love those.

SIP OF THE WEEK: CUCKOLDED YETI, THE ROGUE GENTLEMEN

The Super Bowl is one of the most important food holidays of the year. If you do it right, it’s like a winter preview of what’s to come for the next big show, Independence Day (the summer equivalent of Thanksgiving!).

This year, I’ve been told the Seahawks are playing AGAIN. C’mon guys, give someone else a turn! And the relatively unknown New England Patriots2 will also play. Whoever gets more points wins the game! 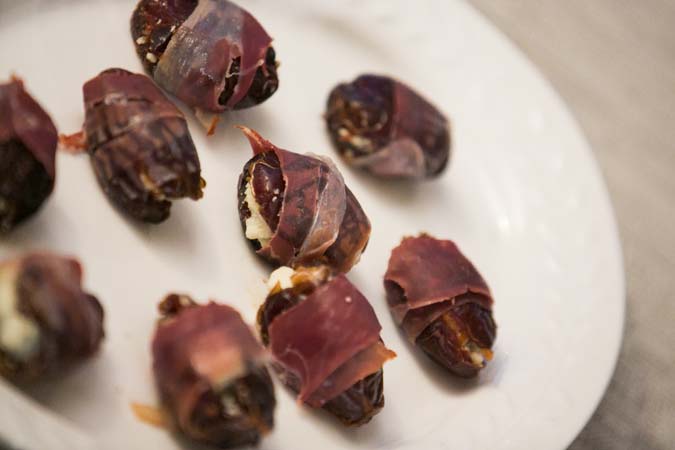 Image and recipe from In Good Taste

Tell me these (from In Good Taste magazine) don’t look like deflated footballs, and I will tell you that you have serious vision issues.

Place eggs in a pot and cover with salted water. Bring to a boil. Turn off the burner, and set timer for 10 minutes.

After 10 minutes, peel eggs under cold running water (or however you do it normally is fine).

Halve eggs and carefully pop yolks into a bowl.

Add mayonnaise, shallot, dijon mustard, and hot sauce to yolks in bowl; and mix to combine. Taste and season as necessary. Fold in crab meat.

Spoon egg filling back into the whites

The Virginia Association for Biological Farming, an organization that promotes biological and organic farming across the state, hosts their annual conference this weekend, and you can follow along from the comfort of your phone.