More new restaurants in RVA than you can shake a stick at. F.W. Sullivan’s Canal Bar & Grille opened this past Saturday, September 28th. This is the sister restaurant to F.W. Sullivan’s [regular] Bar & Grille, and joins Casa del Barco, Haiku, and Southern Railway Taphouse in a bit of a Shockoe Bottom mini-Renaissance. They’ve got 24 beers on tap, a lovely patio, and a view of the canal.

Tazza Kitchen will open in the deep West End next Wednesday, October 9th. Tazza sits in the old Short Pump Cafe Caturra location and is run by one of the original founders of Cafe Caturra, Jeff Grant. Their menu will feature wood-fired pizza and a bunch of Mediterranean-inspired fare. You can get an idea for some of the food by checking out their Instagram.

Coming to 17 W. Main Street, the Lair will offer: a coffee bar, smoothies, Tex-Mex, pizza, and breakfast. The space was originally intended to be a commissary for local food trucks, so you can kinda of see why there are a ton of seemingly unrelated options. The Lair will still do the commissary thing but has also evolved into a restaurant in its own right.

Also Richmond.com reports that the second floor will:

I…don’t know what to make of that.

Richmond.com is also reporting that the owner of the Athens Tavern, which has been located on Robinson Street for the last million years, is moving west and merging with the Greek Grill Cafe. Keep your eye on the Robinson Street spot though:

Center of the Universe continues their run of incredibly well-branded beers with a new winter seasonal: El Duderino White Russian Stout. Yes, that The Dude and those White Russians.

El Duderino is inspired by slackers, sweaters, eccentric friends and exotic drinks (the White Russian to be exact). This decadent chocolate milk stout has been a year in the making and has been piloted and tested at the brewery countless times to ensure its quality. The final masterpiece pours midnight black and is capped with a tan pillowy head. Eight different malts and whole vanilla beans create flavors of chocolate and espresso, offering a perfect way to mellow out after a rough set on the lanes. 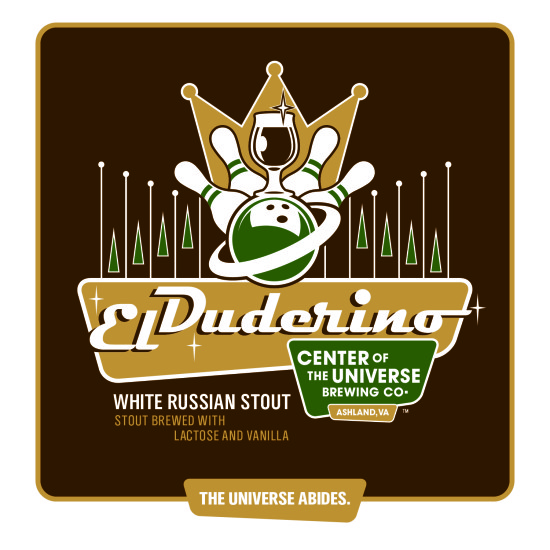 The first two should be available in bottles throughout the area, while the second two should start showing up in a couple of weeks. If you simply can’t wait to try RVA’s newest brews, just hop in the car and head out to Goochland–all four beers are on tap at the brewery.

This week, Richmond BizSense brings us the news of more drama in the Strangeways trademark case. There’s lots of legal words involved in the story which I don’t understand but sure do sound stressful.