Feathernesters offers up a winning combination

Arriving at Feathernesters at 1pm for lunch on a Wednesday afternoon before Christmas, I wasn’t expecting the dining room to be packed, silly me. I didn’t know Feathernesters existed until recently. And that’s a shame because it’s a genius concept. Half retail and décor showroom, half tea room/café, it’s the best of both worlds.

Arriving at Feathernesters at 1pm for lunch on a Wednesday afternoon before Christmas, I wasn’t expecting the dining room to be packed. Silly me. Full of mostly blue-hairs happily lingering over lunch, my dining companion and I were easily the youngest ones there. Luckily, co-owner Tony Turner made a space for us, and we settled in for coffee and a perusal of the vintage kitchen displays and old Richmond department store holiday memorabilia of the tea room.

Until I attended a recent Richmond Business Alliance networking event there, I didn’t know Feathernesters existed. And that’s a shame because it’s a genius concept. Half retail and décor showroom, half tea room/café, it’s the best of both worlds.

Turner co-owns the vintage-style home & garden goods store and tea room with his partner, Marc Goswick. Partners in business and in life, they’ve run Feathernesters for six years, and Turner had a smaller shop across the street for 10 years before that. Goswick oversees the food side, and Turner handles the merchandising/design/retail side. 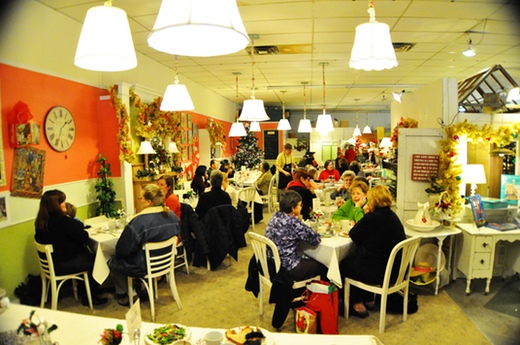 It’s a good-sized space. The tea room has about 15 four-tops, which is bigger than most other tea rooms out there, according to Turner. “I travel a lot, and this is different from most of what I’ve seen. Our customers tell me they’ve never seen anything like this,” he remarks. “We wanted something not so frou-frou. Other tea rooms are often very lacy.”

They purposely kept the menu simple, but have introduced specials, like the Birds Nest Salad, made with mixed veggies and a hard boiled egg tucked into the “nest” of chow mein noodles — that was made for summer but was so popular they kept it on. “We sell more quiche than anything,” adds Turner.

Their food is all made in house daily and is kept as local as possible. They believe in the “farm to fork” mantra and work with local farmers with greenhouses year round to get fresh ingredients. When the Lakeside Farmer’s Market next door is open, much of their produce comes from there. 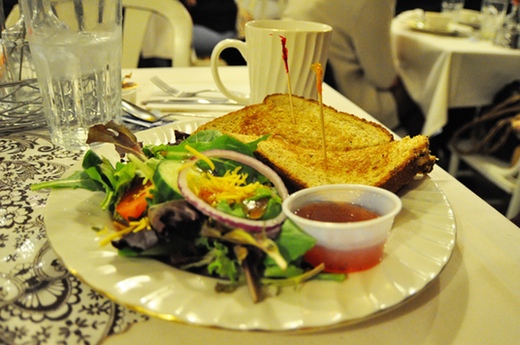 I had the Grilled Lakesider Sandwich, a grilled cheese with tomato and bacon (mine without bacon) which came with the choice of several breads, cheeses, and five sides, including the soup of the day for $8.95. I chose the garden side salad, which was made of crisp greens and a berry balsamic dressing. My friend had the Grilled Turkey Melt with the beef stew (also $8.95). Both of us promptly cleaned our plates of our simple yet tasty meals.

Breads and pastries are baked fresh daily. Desserts are numerous, with homemade fudge and the famous Thalhimer’s six-layer cakes and eclairs, which they get wholesale. After the Richmond department store institution closed, the bakers continued to pass down the recipes to the next generation, and Feathernesters is proud to offer them for $18 a cake or $3.50 a slice. “We’re one of the few places in town where you can get a slice,” boasts Turner. Fifteen minutes of fame arrived when Goswick’s buttermilk pie was featured on an episode of Al Roker’s “Roker On The Road” show on the Food Network.

Despite our lunchtime experience, Feathernesters does draw a rather diverse crowd. As expected, daytime lunches are mostly an older, retired crowd. “People who have time for leisurely lunch,” Turner explains, “though this week we have a lot of teachers.” Saturday breakfast is more families. Brunch is a mix: young, old, post-church crowd, and the gay community.

Friday night dinners are a fairly new addition, at the urging of Chef Jim Prinkey who learned under Chef Paul at the now-closed La Petite France. The dinner crowd is younger, more men. “We have those that shop and leave and those that eat and never shop. And of course, those that do both.” says Turner.

They’re also available for private events, such as the Christmas teas they were setting up for during my interview. They also host several parties for children. Birthday parties for girls ages 5 to 10 have been popular; the girls get to make a craft, take a photo keepsake, and play dress up. Feathernesters sets up the room like a grandmother’s attic where girls can sift through costumes and jewelry, get dolled up, and have “tea” (usually strawberry lemonade). “Little girls love it,” says Turner. In 2011, they’d like to start more offerings for boys as well, such as ice cream socials.

The retail and food sides are often in a race for which does more in sales, though especially at Christmas, the retail is right up there with the food.

Design and craft workshops are available throughout the year, like their make-your-own vintage ornaments class. Christmastime features many special events, such as dinners, teas, and open houses, all of which sell out every year. Their Miller and Rhoads Christmas tea parties evoke old Richmond visits with Santa and the Snow Queen from the department store.

Sharing how they manage to successfully work and live together all these years, Turner notes their divided duties help. They try not to talk business at home. “We’ve mastered it somehow,” confides Turner. They also have four full-time employees and two part-time helpers at the holidays. 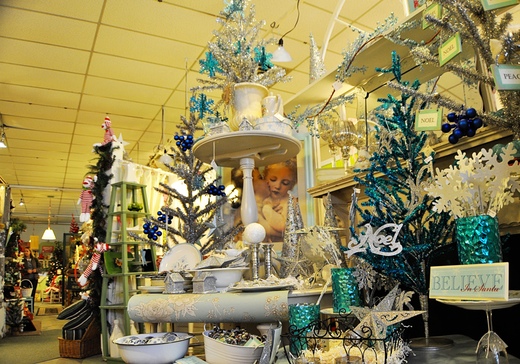 Turner, previously a graphic designer, also has theater set experience. His favorite part of the business then, naturally, is designing the frequently changing displays. What’s in the store now for Christmas is simply stunning. Try to get in there before the holidays are over and see it. Each section feels like it’s own world — a tiny vignette.

“Our customers get used to and demand new and fresh displays,” notes Turner. The tea room was also recently redesigned and now sports a salmon, green, and white theme. The couple is looking forward to a few days off for the holiday though. “Retail and restaurants are both very busy at Christmas. But [imagine] if you have both!”

Their love for vintage shows up in the displays, the connection to old Richmond institutions, the simple menu, and the homey feel. I was looking for a coat rack while I was there, and even though the shop didn’t have any for sale, Turner happily suggested their consignment shop neighbors next door. This kind of local friendliness and dedication to their craft explains their longevity and will surely drive their continued success. I look forward to returning for brunch or dinner soon.

Feathernesters is located at 6118 Lakeside Avenue in the Lakeside Towne Center. They are open for breakfast on Saturdays from 8am to 11am. Lunch is available Tuesday through Friday from 11am and 3pm and on Saturday from 11am to 2pm. Afternoon teas are Tuesday through Saturday start at 3pm (reservations required). Their Friday Night Supper Club is from 5:30pm to 8:30pm (reservations also required). They will be open on New Year’s Eve until 3pm and then will be closed until January 4. Visit feathernesters.com or call 804-262-7305 for more information.