Early Bird Biscuit: Out of time, out of this world

This small shop is leavening some big biscuity business.

Tim Laxton had nearly fallen asleep one night when a thought crossed his mind.

Vintage knickknacks and kitsch decorate his little 725-square-foot bakery: There’s the cuckoo clock that belonged to his grandmother (“I used to love to pull the pine cones,”), rotary phone, collection of old rolling pins long past their prime, and other retro accoutrement that make Early Bird Biscuit as much a time machine as it is the city’s first bona fide biscuit shop.

A quick bread in your back pocket

Laxton grew up in a home that encouraged curiosity. “We were taught as kids to seek out knowledge,” Laxton said of his childhood on the Eastern Shore. “If we had a questions, our parents always encouraged us to look it up.”

Laxton did just that when he was eight years old and decided, for whatever reason, to bake a soufflé. Inside the family farmhouse was a large pantry of canned goods and one-of-a-kind church and community cookbooks passed around from home to home in a pre-digital age. “These are people who have shared something deeply personal and had them printed,” Laxton said. And outside of the pages of those books, “a lot of those recipes just really don’t exist anymore.”

The eight-year-old Laxton picked out a soufflé recipe from one of the books, gathered ingredients, and then voilà. “That’s how we learned. We were always encouraged just to tackle things.”

Raised in a Southern family, Laxton often ate a regional staple: the biscuit. “It’s a quick bread,” he says. “My mom used to say you need to have a quick bread in your back pocket just in case you’re entertaining” or need it to pair with a meal.

Laxton later traveled to Richmond in the late 1980s to attend VCU. “It was a culture shock coming to Richmond from the Eastern Shore,” he said. “I loved it.”

After graduating from VCU in 1990 and working various part-time jobs, Laxton landed a corporate sales position at Marriott. But after a decade, the company restructured in a way that ultimately put Laxton out of work at the height of the recession. So he did what any average person would do: created a successful pool-cleaning business in Middlesex County.

Laxton enjoyed being the local pool boy. “I was successful. Great customers. I did really well,” he said. “I got to drive a pickup truck, call my own hours, wear shorts to work everyday. I got to be my own boss.”

But it wasn’t his gimmick. “I just hadn’t settled on that one thing that made me feel alive and nourished,” he said. Until the night of his biscuity epiphany.

While driving to a New Year’s Eve party in 2012, Laxton passed a vacant property at 5411 Lakeside Avenue. “I just looked at the building and said, that’s it. I just knew it.” That’s where he’d bake biscuits for a living. 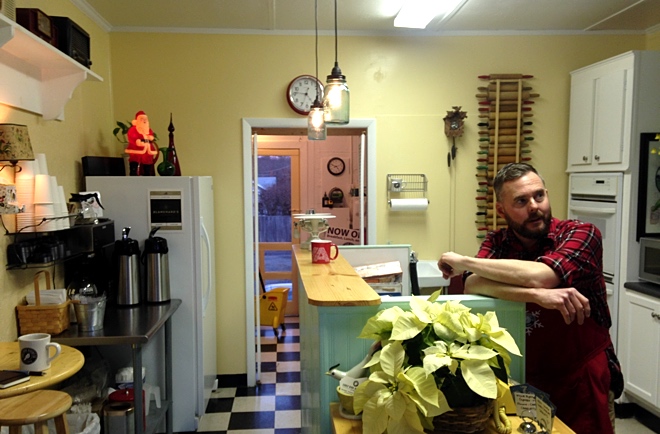 He said biscuits are the “quintessential Southern vehicle,” something you can eat alone, use for a sandwich, or to sop up any remaining sauce. “It’s something that’s really basic and straightforward,” he said.

While simple on paper, really good biscuits, like the ones his mother and grandmother made, have to be hand-mixed, hand-rolled, and handmade with love. And Laxton extends that personal touch philosophy to the rest of his business. “That was one thing I decided–I was going to have a storefront and I was going to offer hospitality to people who came in…I wanted to touch as many parts of that product as I could.”

He also eschewed an elaborate menu. “How do you maintain quality when you have that many items on the menu? So I just wanted to offer a few things that were just done really well,” he said. “That’s pretty much my business model.”

Laxton took inspiration for Early Bird’s nostalgic decor from the building itself. “This building…is all mid-century modern,” he said about the small shopping center stretching along Lakeside, built circa 1950s. “I wanted to play with that a little bit. But in a fun sort of way.”

Juxtaposing the vintage ephemera are bits of modernity (next to the rotary phone is an iPad equipped with Square). But even with its modern conveniences, Early Bird Biscuit feels like Grandma’s kitchen: warm and welcoming. “It’s funny, when people come in, they’re like, ‘This place is so tiny. But I feel happy. It makes me feel comfortable,'”1 Laxton said. “That’s what I was going for.”

On a busy day, Early Bird pumps out 400 biscuits, in addition to the homemade apple pie, chicken salad, pimento cheese, and other offerings. Not long ago, after closing up on a Friday afternoon, Laxton took part in the nearby Holly Jolly evening festivities. Between regular business on Friday, the Holly Jolly, and normal Saturday hours, Laxton made 1,647 biscuits. “So in less than 24 hours I made almost 1,700 biscuits with these two hands,” he said.

Laxton wakes at 4:15 am, six days a week, to ready Early Bird for its 7 am opening. “People are usually in the parking lot before we open,” he says about those who pep up for the day with a biscuit and a Blanchard’s custom coffee brew.2 They wait for the rewards of Laxton’s hands-on approach to making biscuits.

Other places treat biscuits as a starchy side. But not Early Bird. “I treat a biscuit like a croissant. It’s just really good, almost like a pastry,” he said. “I tell the folks that work with me here, ‘Why would you ruin a good biscuit by putting egg and cheese and all of that on it?”

When it comes down to it, he’s a biscuit libertarian. “You can take it home, and what you do with your biscuit is your business,” he says with a smile.

A favorite among Laxton’s loyal and growing following is the biscuit and gravy using locally sourced sausage and a recipe passed down from Laxton’s grandfather. “We can’t make enough biscuits and gravy on Saturdays,” he remarks. “People love it.”

And Laxton loves the people. “I know this sounds very cliché, but they feel a lot like family,” Laxton said. “It’s an extension of my family because they’re the ones that genuinely check in with me…they always ask ‘How’s business? How was today?'”

While business is good, Early Bird doesn’t offer the relaxed pool cleaning schedule Laxton once had. Not only does he wake up before dawn, but Laxton often doesn’t leave the store until long after the sun has set. “I’ve never put in these kind of hours at any job, but I love it. I wouldn’t be here if I didn’t,” he said.

Laxton stressed that if he can put together a business on a “shoestring” (i.e. without debt) anyone can. “It doesn’t have to be a huge budget to pull a business like this together,” he said. Most of what he owns came secondhand. “[You] can go out and find things to pull a business together.”

But a business like Early Bird Biscuit isn’t something easily duplicated. It’s a place that’s both here and there, straddling the past and the present. It’s simultaneously something familiar; something new.

“Something that’s good, that’s really homemade that I made for them,” Laxton says about what he wants his biscuits to mean to his customers. “Something that maybe they’ve never tasted before and never knew how good it could be.”