And why this little neighborhood restaurant in Church Hill just might be one of Richmond’s best. If you want to know the character of Dutch & Co. look no further than to the tamale.

“Everybody loves a good tamale,” said Philip Perrow. But it wasn’t just any tamale he and Caleb Shriver, Perrow’s counterpart in the kitchen, were making. It was a tamale wrapped, not in the usual corn husk, but in a squash flower. Whereas you avoid eating the husk of a traditional tamale, wrapping one in a squash flower makes the entire plate fair game.

“We want to do something unique,” Shriver said about Dutch & Co. “Something different, but at the same time something familiar.” Something different while still familiar sounds, well…impossible, but Perrow and Shriver don’t fear bending the idea of what’s possible.

In addition to the squash, they added Cobia (a type of fish) with braised lamb, roasted corn, and cuitlacoche sauce. It was, more or less, different from any other tamale that came before, but it wasn’t designed to be different, Shriver said. “It kind of organically came about.” When one of their Salvadoran employees arrived, he looked at the plate of flowery deliciousness and said it reminded him of home when he’d eat squash pupusas. Different, but similar.

You can tell the restaurant’s three owners have some sort of a near psychic bond between them. They know they do too.

“I think there’s an unusual connection between us,” Shriver said one morning at one of the restaurant’s tables, sitting alongside his co-owners: Phillip Perrow, and wife, Michelle Peake Shriver. “All of us share the same values.”

Michelle Shriver likens the trio to a team, harkening back to their youth when they played team sports. In those days, whenever the dynamics of a game would suddenly change, they learned the importance of teammates shouldering burdens and working together to adapt to any split second change.

“There’s something about a team sport where everything changes in a matter of moments,” Michelle Shriver said. The restaurant business is no different: bad weather, untimely food deliveries, road construction, all these and more can influence how well or poorly a restaurant does. But whether there’s good or bad fortune, Dutch & Co. weathers it together.

Phillip Perrow is the only co-owner who grew up in Richmond. Towards the end of high school, his eyes widened at the thought of leaving the restaurant floor and working in the kitchen. “It was a completely different environment,” Perrow said about what he saw, heard, and smelled in professional kitchens.

He got into one at The Frog & The Redneck, a now defunct restaurant on the 1400 block of E. Cary Street. Eventually he settled into the line at Acacia.

His future partner, Caleb Shriver, grew up in Oklahoma and met Michelle at the former Chicago restaurant Otom.

But Michelle Shriver also worked at Acacia from time to time. That’s where she met Perrow. During a Christmas party in Richmond, Michelle introduced Perrow to Caleb, and the two became friends. So much so that Perrow traveled to Illinois (where Caleb was still working) to cook alongside him for a few days.

Around 2010, Caleb Shriver moved to Richmond and began working at Aziza’s. Finally, all three lived in the same city, developing their skills among the best cooks Richmond had to offer. But eventually, you have to strike out on your own. “You can’t train under people forever,” Caleb Shriver said. “Everyone that works in a restaurant wants their own restaurant,” he said.

Not only did the trio share an uncommon connection with one another (as they still do), but they also value and admire the talents each other brings. “We could learn off each other,” Shriver said.

So in early 2011, the trio began scouting a location for their own restaurant. It was their realtor who eventually found a former laundromat at 400 N. 27th Street.

Perrow said there was a “stigma” about Church Hill when he grew up here. But that was then, the three were in love with the place and with Church Hill. “This is where Richmond started,” he said.

The three took six months to renovate beginning in June 2012. And as it would be with the tamale, the space just kind of came together 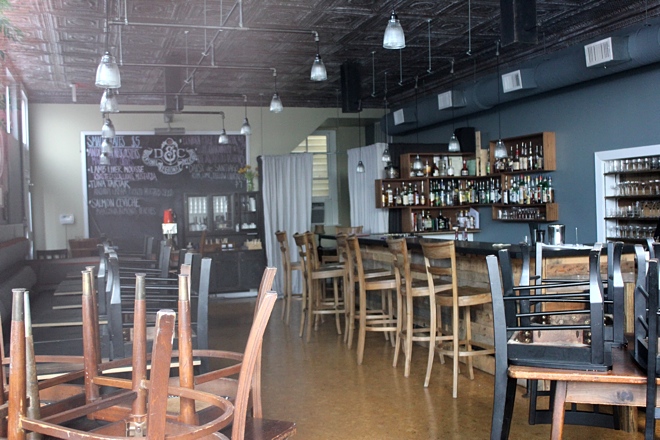 For instance, while on Craigslist one day, they read an ad posted by Winfree Church in Midlothian which was selling an old, 18-foot-long pew. Not only were parishioners happy to broker a deal with the restaurant owners, they even broke down the pew and help delivered it to the restaurant.1 It’s now the restaurant’s banquette.

Woodworker Daniel Rickey created the bar and tables, topping them with material made in part from compressed paper, and interior designer Shannon Reed helped shape the restaurant’s aesthetic.

“We’ve learned so much”

The restaurant’s catchphrase is: “seasonal, regional, and delicious.” It’s certainly catchy, but also true. Both chefs are committed to using the best local produce from the best local farmers. “We take their excitement and put it on the plate,” Perrow said.

As typified by their tamale, Caleb Shriver said they leave their seasonal menu to the whims of what moves them and “getting inspired by different things at different times.”

Beyond Perrow and Shriver’s playful and flavorful menu, another thing that’s pulling people to the restaurant is its eclectic menu of wine and mixed drinks. “A lot of people don’t recognize the wines that are on our list,” Michelle Shriver said. And she describes the mixed drinks as “simple” and “well-balanced.”

Not only have people across Richmond embraced the new restaurant, but so have its fellow neighbors–that’s the most important demographic the owners want to impress. All three consider Dutch & Co. to be a neighborhood restaurant, one that proudly stands in Church Hill.

“It’s a strong community up there,” Caleb Shriver said. His wife agrees: “It blows my mind on a daily basis,” she said about how welcoming and generous people are.

One instance that stands out to all three took place soon after the Sub Rosa fire in April. After the fire, owners of the burned bakery donated unscathed confections to Dutch & Co. The three decided to turn around and stage a bake sale to benefit Sub Rosa using those treats. When Dutch & Co.’s stock sold out in a matter of minutes, the nearby WPA Bakery donated some of their food to raise even more money.

Dutch & Co. is now an integral part of that neighborhood, as well as Richmond’s overall dining scene. It’s a scene that has helped train and develop each of their abilities.

“We’ve learned so much from our mentors,” Caleb Shriver said. Now they want to return the favor by training and mentoring a new crop of cooks and bartenders that may one day start their own restaurants. That’s how you keep talent in a city, Caleb Shriver said. “That’s what makes a city great.”