Many children’s first birthday parties end in fistfuls of cake, melted ice cream, and lots of photos. For one local Richmonder, her child’s first birthday ended with an ambulance. He had eaten a cupcake, had a severe allergic reaction and she didn’t know what was happening. Luckily one of her girlfriends was a nurse, recognized the signs, and called 911.

That visit ended with sedation, an IV, and a declaration of a life-threatening allergy. For Tiffany Glass Ferreira’s son, the answer: no eggs, wheat, milk, soy, or nuts. “At 1 year old! And he didn’t even have any teeth!” she exclaims. So Ferreira launched a campaign to educate herself, her family, and others.

An estimated 72,000 children and 241,000 adults in Virginia are affected by food allergies, and hundreds of Americans die each year from food induced anaphylaxis (an extreme allergic reaction).

Affecting 3% of children under the age of 18 years and about 4% percent of adults in the United States, anaphylaxis can be difficult for those who don’t have allergies to understand the severity. “Even our family said, ‘you’re just overprotective,’ and ‘you’re making it worse by not giving it [allergens] to him.’,” she says. Both an artist and teacher, Tiffany naturally turned to art to express her frustration and anger.

“That’s when I started drawing cartoons,” she says. She won’t say just how much is a direct reflection of what her friends and family members say to her, but says, “Hey, this is a really crazy thing you said, and when you see it in a cartoon it’s kind of funny.” 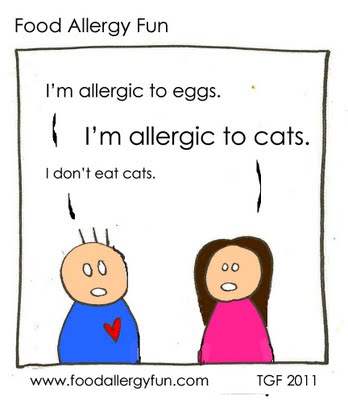 She started drawing the food allergy-themed cartoons about six months ago. She begins on paper and takes a photo with her iPhone, which is about as high tech as she has time for. You can view more on her site, www.foodallergyfun.blogspot.com

Her son is four now. He’s seen four pediatricians and three allergists, and has participated in elimination diets, blood tests, and multiple follow ups. “It’s a moving target,” reiterates Ferreira. Now he is only allergic to eggs, milk, and tree nuts, specifically cashews, which are most often packaged in factories that make other nuts. Peanuts are different, however, since they are legumes.

He goes to school with an EpiPen (an epinephrine autoinjector) and a note saying that, if he comes into contact with nuts, teachers must call 911 immediately and that his mother will meet him at the hospital. “It’s like a 10 minute window,” explains Ferreira of the response window for a severe reaction

It can be somewhat isolating. Her son didn’t go trick or treating; didn’t go to any kind of party last year or even any kind of celebration. Naturally, small children are inclined to go after any yummy-looking treats, and why would her son be different? The risk just wasn’t worth it. Over time, he’s become more aware of his allergies, because he’s had such a dramatic reaction. “If someone gives him a cookie, he’ll ask, ‘What are the ingredients? I’m allergic to nuts’,” says Ferreira.

There’s an overall health and cost angle here too. “Recently I got an ironic (and too common) ‘Awww, poor kid.’ response from a well meaning person when I pulled out my son’s packed lunch. Meanwhile, their kid was having 12oz of orange soda, chips dripping with nacho “cheese” and Dippin Dots.” That kid’s lunch cost? $12.

She tells us about Yummy Lunch Ideas, a website with photos of healthy and colorful packed lunches. The boxes are geared mainly towards kids, but darn if they don’t look appetizing and fun for adults, too. Over 100 ideas are there, not one with Day-glo cheese.

Ferreira’s been commissioned to draw her comics for special events as well. She recently collaborated with the Virginia Museum of Fine Arts for a no-candy Easter Egg Hunt this spring, which was covered in several local press outlets. After months of talking, planning, and okaying eggs, trying to make it safe for everyone, she went to two different egg hunts that week: the allergy awareness one and a regular one where she just brought her own eggs. She made sure her children brought her all the eggs they found before opening them, and she just swapped them out with her own at the end. Turns out, that was probably easier, she admits.

Lewis Ginter and Maymont have contacted her about having food allergy safe events, but Ferreira cautions that most allergies are very specific, so there’s often no possible way to make it safe for everybody. It’s good to be aware so that parents can get the information they need to make better decisions, but there might not be an answer for all or most. The VMFA actually saved money, too. She’d love to get to the day where when she calls and asks, “What’s in the eggs?” that she’s not considered annoying.

A new initiative may help, at least for eating out. AllergyEats.com is an aggregator of restaurants that include user-posted ratings for allergy safety. It’s a burgeoning website, and not all the restaurants listed are rated yet, but Ferreira was heartened to see Belvidere at Broad at the top of the list.

She hopes that in 10 years when her children are older and the family wants to go out together there will be places to go that have an allergy-sympathetic chef. Most allergies aren’t expected to be outgrown. Currently, she brings food with her whenever she has to go someplace with her children. It’s hard for her to trust a restaurant. “I waited a lot of tables. I know how busy it is, and how many hands are on the food. It doesn’t seem reliable when it’s life threatening.”

For that reason, she’s excited about the Allergy Eats site. “It’s just the tip of the iceberg. If there are 25 restaurants on there now…” she trails off, her silence intimating her hope for the future.

“If a person with a food allergy comes in to the restaurant, and they feel safe, and they get what they want, it’s an instant loyal customer. Or the opposite, that’s the tipping point where the restaurant becomes unsafe. It’s the ultimate bad press for that entire audience,” she points out. Another local woman, Loralyn Mears, recently launched her own business, Clear Allergy Labels, making creative and clear allergy holders and inserts. Not a mom, but a woman with her own individual dietary limitations, she also saw the struggles of her niece and nephew. Mears was inspired after her own injury when people were bringing her casseroles, and she couldn’t eat any of them.

“For a lot of us, it’s such a completely different lifestyle, but not an optional lifestyle. Eating out in restaurants is such an optional thing,” offers Ferreira. She feels a little helpless at the speed in which allergy awareness is moving. Just recently, on a visit to the Pediatrician for a wellness visit, her son’s doctor asked her about The Food Allergy and Anaphylaxis Management Act, a 50-page document that was signed into law by President Obama in January of this year. “Have you read it?” she asks me. “This is the conversation I’m having with my Pediatrician, who has a medical degree. That’s what’s frustrating.”