Back in April, two friends came together to start a food truck and take-out location that catered to traditional Southern cuisine. The food has been getting rave reviews. But how’s business been? Open the door and you are immediately bowled over by the warmth and smell of fried chicken, biscuits, and other traditional Southern food. Step inside and you greet a cornucopia of made-from-scratch soul food inside a small, inconspicuously nested spot in Forest Hill. Dixie Chicken just might be the best thing to happen to comfort food in quite a while.

“We just like good food,” said head chef Todd Brady one afternoon. Wearing a bright yellow VCU shirt, black beanie hat, and denim overalls, Brady looks more like a longshoreman than a trained chef with over 20 years of cooking experience, most recently at the Country Club of Virginia. His talents have now turned to dishing out traditional Southern food.

Brady’s infatuation with Southern cuisine came nearly two decades ago. It was then that he read The Taste of Country Cooking by Edna Lewis. Born on a small farm in Freetown, VA where her family settled after her grandfather was emancipated from slavery, Lewis published the classic cookbook in 1976. Brady said its recipes and lyrical passages was “something that made me really passionate about Southern food.”

Earlier this year, Brady and friend Sheila Wilkins started discussing plans to open a food cart. While Wilkins had spent a long career in banking and graphic arts, she’d participated in Brunswick Stew Festival competitions and even worked with Brady to cater events. Although the pair first planned to run a soup cart, they decided to scrap the idea for the Southern cooking they both loved. 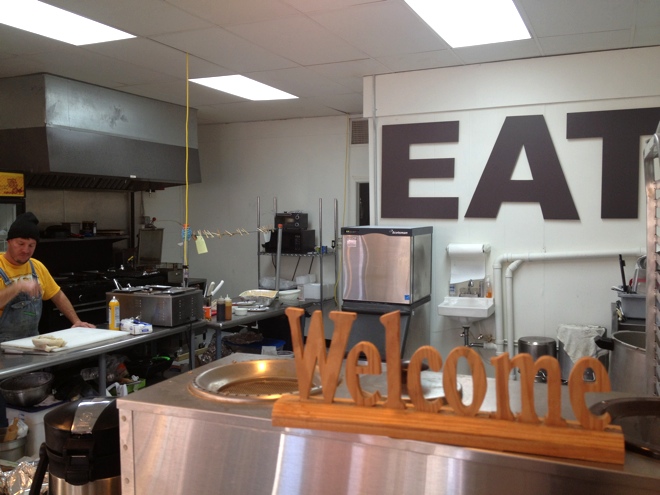 “It’s food that came out of desperation,” said Brady of the cuisine. Items like dried beans and cider vinegar, he said, were used in Southern dishes because other ingredients were hard to come by. People had to make do with what they had. With restaurants like Comfort, Pasture, and others, Southern food is “starting to get a bit of respect,” said Brady. Dixie Chicken hopes to add to that reputability in its own way.

Brady and Wilkins knew that the Dixie Chicken food cart would need a commissary to prepare food in. They found a spot in Forest Hill, an old seafood kitchen,1 that suited their needs. The pair soon realized the space could serve as both a commissary and a convenient take-out spot to help fund food cart operations. Using wood from an old Amelia County farm (where Wilkins is from), the two built a rustic counter, added a few items of rural decor, and began selling food back in April.

“A lot of people were excited about [us] having chicken,” said Wilkins about their Forrest Hill neighbors. Using a unique marinade and selection of spices, many sing the chicken’s praises, saying it surpasses the chicken you find in high-end restaurants, let alone the local KFC. A new $9,000 cooker has allowed Brady and Wilkins to fry more chicken more quickly, making lunch hour waits less time consuming for customers (take out customers are still encouraged to call ahead). But the chicken is only part of Dixie Chicken’s increasing allure.

Entrenched in the administrative side of the business, Wilkins also makes time to make another kind of side. She prepares the biscuits and deviled eggs (both recipes from her mother), as well as the chicken dumplings. Dixie Chicken’s most popular sides, however, are the collard greens and baked mac and cheese, the latter made from Brady’s grandmother’s recipe. “They get stuff [here] they don’t normally have or cook for themselves,” said Wilkins. “It’s a completely different product.”

Brady said that “People can tell we care about [the food].” He added that the two do not take “shortcuts that are going to sacrifice [the quality].” That’s what draws people from the neighborhood, as well as from Powhatan and Midlothian, said the owners. All this despite an unideal parking situation.

Dixie Chicken shares a small, eight car parking lot with a coin laundry and salon. As those business each retain their respective customers for an hour or more, parking spaces are gobbled up, often leaving hungry lunch and dinner goers without a place to park. That, however, hasn’t stopped Dixie Chicken. “We have a lot of repeat customers,” said Wilkins. 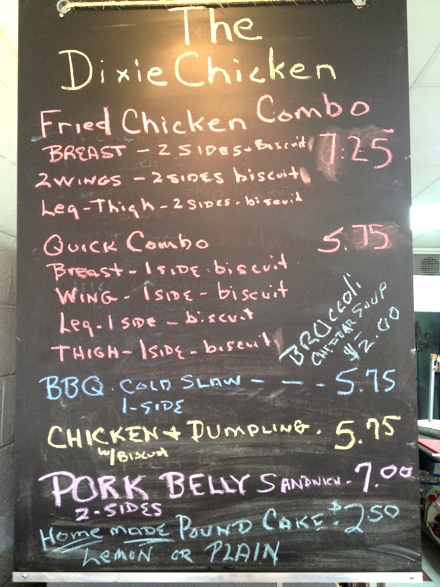 Both she and Brady hope to one day own a sit-down restaurant that features a similar Southern menu. While admitting that their antennae are tuned for potential locations around town, nothing has been decided upon yet. For now, the two apply their ambitions to Dixie Chicken’s menu.

The pair plans to offer french fries, a sweet potato soufflé, and even seafood items in the near future. They have also partnered with a marketing company to facilitate Dixie Chicken branding and advertising. Having largely self-funded the new business, the owners openly lament having to scrape through an economic recession. “We can’t stop now,” said Wilkins. “We’re at that point where if we don’t keep going, we’ll have to close.”

With a marketing strategy in the works and the ever growing clientele from word-of-mouth, Dixie Chicken hopes it can weather the recent business lull. “Once we get a year under our belts I think we’ll be in a pretty good position,” said Wilkins.

In the meantime, both Brady and Wilkins will keep making traditional Southern food. Food meant to taste “like what Grandma made,” said Wilkins. “All of the food is from our past.”