Virginia Democrats slammed Ken Cuccinelli for on Tuesday for not supporting reauthorization of the federal Violence Against Women Act. In a telephone press conference, Delegate Jennifer McClellan of Richmond (D-71st District) and Arlington Commonwealth’s Attorney Theo Stamos criticized Cuccinelli for being one of three state attorneys general who did not sign a letter urging Congress to reauthorize the act.

“Virginians deserve to know what prevented Ken Cuccinelli from sticking up for the Violence Against Women Act, not a half-hearted excuse for sitting on his hands while Republicans killed the reauthorization,” McClellan said. 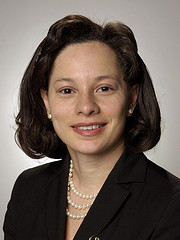 “As attorney general, Ken Cuccinelli is the chief law enforcement office in the Commonwealth, charged with doing whatever it takes to keep all Virginia safe from those who would do them harm.

“In light of that responsibility, and his desire to be our next governor, Virginians deserve to hear a real explanation from him as to why he would refuse to support the Violence Against Women Act.”

Cuccinelli’s spokesman said there is a simple explanation: By policy, the attorney general’s office does not sign letters of support for federal legislation that is still subject to amendment.

“It is beyond comprehension how anyone could seriously try to blame a single state attorney general because 535 members of the U.S. Congress didn’t pass a piece of legislation,” said Brian Gottstein, the attorney general’s director of communication.

He noted that Cuccinelli supports many programs against domestic abuse. For example, the attorney general operates the Address Confidentiality Program, a mail-forwarding service that keeps the addresses of domestic violence victims confidential. Cuccinelli’s office also collects cell phones to donate to Verizon Wireless’ HopeLine Program for victims in protective shelters.

In an interview, political commentator Bob Holsworth said he believes Democrats are attacking Cuccinelli on this issue to paint him in a bad light in this year’s gubernatorial race.

“The Democrats are trying to position Cuccinelli as someone out of touch with the mainstream. Using social issues like this is a great way to do that,” said Holsworth, the founding director of the Wilder School of Government and Public Affairs at Virginia Commonwealth University.

During the conference call, Stamos, who has been a prosecutor in Arlington County and Falls Church for more than two decades, said the Violence Against Women Act has helped law enforcement officials.

“The act has helped people in our office to deal with the very specific and specialized needs of domestic violence victims. It has provided the training and tools that we need at the local level to prosecute very difficult cases,” Stamos said.

Since 1994, the Violence Against Women Act has provided funding for rape crisis centers and hotlines and assistance for women who have escaped domestic abuse.

“It is a piece of federal legislation that works in the trenches at the local level,” Stamos said.