Where in Richmond can a moped repair shop, 3D printer, and furniture artisan all feel at home? One of the defining features of Richmond is its creative class. Fueled by relatively low rents, a huge university, and the DIY nature of the city, young artists, musicians, makers, and professionals have created an irresistibly vibrant scene. Richmond has plenty of offices and studios, but a truly collaborate workshop for craftspeople and artisans could elevate the community further.

Richmond has plenty of “white collar” co-working spaces like Gather, 804RVA, and GangplankRVA. It also has a fair amount of studio spaces ranging from the established fifty-year-old Visual Arts Center to Studio Two Three, to newer, smaller places around town.

What’s missing is a warehouse turned laboratory for everyone from photographers to motorcycle repairpeople–a Menlo Park for millennials.

The perfect model for Richmond is Fort Houston in Nashville, Tennessee. Tucked inside an endless warehouse in the up-and-coming Wedgewood-Houston neighborhood, Fort Houston has tangible energy. Just past Herschel Greer Stadium where the triple-A Sounds play baseball, it is a constant hive of activity that strikes the balance between effortlessly world class and bohemian.

Opened in February of 2013 by Ryan Schemmel and Josh Cooper, the 10,186 square foot warehouse is home to a collaborative workspace complete with a massive wood shop, a printshop, a photo studio and darkroom, a motorcycle and moped shop, a metal working shop, and desk space. Fort Houston also doubles as a sometime music venue, event space, art gallery, and shop.

The two started the space with a huge emphasis on educational classes before the project evolved into a full-blown co-working workshop. In less than two years, it has seen its membership swell to 100 members.

Many started as Nashville musicians trying to supplement income. Then something amazing happened, the members started becoming really successful. Schemmel jokes, “now these guys make more money than us.” As Fort Houston’s brand has grown, new businesses now contact Schemmel and Cooper for work. The two dole out jobs to members making signs, tables, shirts, posters, and just about anything. 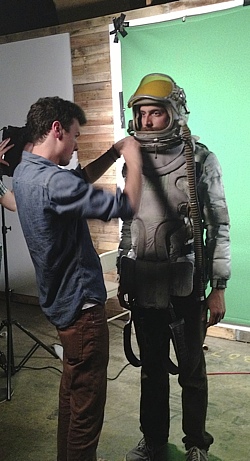 Fort Houston is a social business operating as an LLC. They moved into a warehouse in an up-and-coming neighborhood which presented a fair number of challenges. First came five months of labor preparing the space. Then the two had to make peace with a neighbor struggling to understand their mission. Then the city classified them as educational institution which created regulatory hurdles.

The city government eventually helped Shemmel and Cooper wade through complicated and expensive regulations while creating a benchmarking program for city codes. In the process, the city “practiced” for future businesses. Nashville is interested in expanding its creative class, especially beyond the music industry, and the work is paying serious dividends.

Moving forward, Fort Houston plans to focus on its members while opening a new space around the corner to expand its metal working and motorcycle shops. Eventually, the two want to start a Fort Houston “Graduate Space” for successful members who have outgrown the shared work benches.

Richmond undoubtedly has the talent and space (Manchester and Scott’s Addition come to mind) to build a workspace/business incubator in the vein of Fort Houston. I just hope it happens sooner rather than later so I can further enjoy the products of Richmond’s creative class.