In certain situations, cyclists should be allowed to treat stop signs as yield signs and red lights as stop signs. Pedestrians jaywalk. Cyclists blow through stop signs. Drivers regularly speed and often stomp on the accelerator as the light goes from yellow to red. People using all forms of transit regularly break the rules and push the limits of what’s safe. 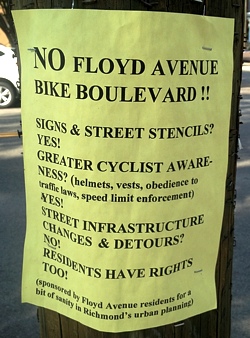 Recently, an unfair emphasis has been put on the transgressions of cyclists when discussing infrastructure upgrades for Richmond’s fastest growing form of transit. These attacks distract from the valuable conversations surrounding these important issues and limit Richmond’s ability to realize the full potential of its transportation future with the maximum amount of citizen input.

More importantly, cyclists’ transgressions are against laws that may not even be the safest and most efficient way of integrating transit options as different as cars, bikes, and pedestrians.

The “Idaho stop” allows cyclists to treat stop signs like yield signs and red lights like stop signs. It does not allow cyclists to blow through any intersections (Oregon actually attempted to increase the penalty for this), and cyclists are forced to yield for low visibility, the presence of cars, other cyclists, or pedestrians. Vox recently did a profile on this transit change.

This law allows cyclists to maintain momentum and balance through intersections which is more efficient. While it sounds like havoc, it makes sense and has an excellent track record for a few reasons.

Cyclists operate at slower speeds than automobiles, have significantly better vision, and are able to stop almost immediately. The law is practical and promotes predictability–something noticeably lacking in Richmond. Some cyclists respect current laws while others don’t, this leaves others on the roads regularly guessing as to their intentions. Finally, the law makes low traffic roads more desirable for riders. Instead of hopping on streets like Monument, Main, or Cary, cyclists would have a strong incentive to hop on less traveled streets like Floyd Avenue.

Changes could be made to promote cyclist safety that may also make an “Idaho stop” bill more passable. Cyclists are required to have a front light and rear reflector after dark, and a flashing red taillight is required after dark when the speed limit is 35+ mph. A red tail light should probably be required any time after dark. More importantly, this law should actually be enforced.

The deescalation of rhetoric will help Richmond reach the safest and most efficient way for automobiles, cyclists, and pedestrians to co-exist on the road. An abundance of safe transit options for all is in the best interest of every resident in Richmond.