I Mean To Live Here Still is the brand new album out next week that expands David Karsten Daniels’s horizons and is catapulting Richmond’s Fight the Big Bull into new limelights.

The first meeting between Fight the Big Bull’s Matt White and singer-songwriter David Karsten Daniels was not as serendipitous as one might like to believe. There were no signs of a great budding friendship. If magic was in the air, it was unbeknownst to all.

The acquaintance — catalyzed by a Durham, NC, gig by White’s other band, The Great White Jenkins — did, however, turn out to be a good professional one. Daniels and White would get each other gigs in their respective towns, and that was the extent of it for a while. As White recalls, it wouldn’t be until Daniels heard a Fight the Big Bull feature on NPR at his new home in Portland, Oregon, when the folkier of the two would get the ball rolling on a collaboration.

It’s this collaboration that produced, I Mean To Live Here Still, the brand new album out next week on the UK-based Fat Cat Records that expands the now San Francisco-based artist’s horizons and is catapulting Fight the Big Bull into new limelights.

For White, that was part of the appeal of the project. “It was a business thing,” said White. “This guy with this label wants to work, and distribution is way bigger than we’re used to. For me, it was a no-brainer regardless of what he brought to the table.”

Lucky for White, what Daniels brought to the table were 10 great songs with texts from Henry David Thoreau poems. Once he heard the demo recordings, White got excited about it. “I think he did a fabulous job turning those poems into songs,” he said.

Listen to “Though All The Fates”

Usually not a fan of this kind of thing, White says Daniels’s transformations of the poems into songs seemed exceptionally natural. “I think that’s one of the huge things he did for the record: the way he turned the text into things that feel like they were songs first was pretty incredible.”

White got working on the concepts for his arrangements to pitch to Daniels. He started on this part as early as August, writing text scores, like “Drony bass line, Terry Riley, harmonized melody on top of it, Brian Jones does weird shit, Pinson plays beat on the ride,” and sectioning the forms of each tune.

Possibly one of the most important parts of the development of the arrangements happened next: White did nothing. It’s not that he chose to not write the charts over the several months before Daniels would arrive in January, but that he couldn’t. Without reason, White found that he could not make himself work on the arrangements, despite telling Daniels that they would be done by December 1. That deadline passed and White was waist deep producing a friend’s record all month.

“I hadn’t touched the record, hadn’t done anything,” he said. “I basically lied to [David] on the phone: ‘Hey man, I got all this shit done, I’m just really lazy about sending it to you. But don’t worry about it, it’s fine.'”

This was one lie that White thinks saved the project. “If I had told him at the end of November when I was supposed to have it done that I hadn’t touched anything, he would have pulled the plug on it.”

He got over the phase around New Years, and just in time. Daniels was set to arrive in Richmond on January 8 to start rehearsing and recording, and nothing had been written. White wrote in a fury eight of the 10 tunes from start to finish in four days. The two singles (“The Funeral Bell” and “Though All The Fates”) were left for last.

Rehearsing “The Funeral Bell.” Daniels recorded several videos during rehearsals and posted them on his blog.

The band’s schedule was set: rehearse every day from Saturday to Wednesday, take a day off, and record in the studio for three days starting on Friday. White managed to finish “Though All The Fates” on Tuesday night in between rehearsals, but the other single remained uncompleted until the next night, behind closed doors from Daniels in another room.

“I literally had not listened to the demo for ‘Funeral Bell’ all the way through one time,” White admitted. After six hours of working on it, he was pleased. “I think the horn arrangement for ‘Funeral Bell’ is one of my favorite things I’ve ever written.” 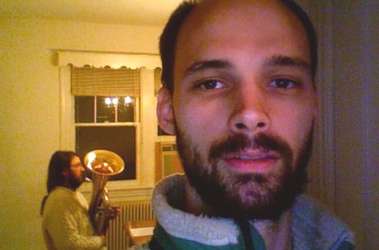 In the first musical meeting between the singer and the band, rehearsals brought out personal and musical differences. Describing Daniels as a “very quiet, unassuming, soft kind of guy,” White emphasized how his band is quite the opposite.

Their work ethic is also different. “He’s never met these guys,” White said. “He doesn’t realize that when they’re in rehearsal, especially the first night of rehearsal, they’re basically giving 25%. I know that when they play a chart a week away from studio, it’ll sound different in the studio. He doesn’t.”

Things got tense, White said, and Daniels became worried. The music didn’t click right away, and they didn’t have the luxury of time to figure out what wasn’t working. “He definitely is really superb at talking through stuff and working it out,” White said about Daniels, “not losing sight, not freaking out.”

On the last morning of recording, Daniels was starting to feel better about things, writing on his blog, “Last night was a great rehearsal. Things are really starting to come together.”

While Daniels pulled the rehearsals together into efficient and productive meetings, going into Minimum Wage Studios meant going into White’s ultimate comfort zone. “I feel really good and positive in that environment. I get excited like a baby. It’s a strength of mine: to make sure it goes down well in the studio.”

The tension eventually lifted, but not right away in the studio. Daniels, after all, is used to a different studio process than a band like Fight the Big Bull employs. “When you’re a singer-songwriter that makes all his records by overdubbing everything,” White explained, “you forget how fast you can make records when there are nine people playing at the same time.”

After day one in the studio, seven tracks — over 2/3 of the record — had been completed. Percussionist Brian Jones came in at night to record overdubs, and Daniels soon realized this would be no ordinary percussion track.

“We’re on the first song and David says, ‘I think I want a light shaker sound on this one.’ And I was like, ‘Man, that’s not the way this is going to work. I’m just telling you right now, you’re not going to go down there and tell him that. That will never happen. Just let him do his shit, and it’ll be cool.’

“David was totally expecting a percussion player: a little shaker here, tambourine there. And Brian is a pretty major voice on the record.”

Not only did Daniels like the percussion takes, but White says he’s currently working on new songs using just Brian Jones’s tracks from that session.

Rehearsing “Die And Be Buried”

Closing up shop at Minimum Wage, Daniels packed up and left Richmond and White was left to reflect.

“At the end of the day, it turned out awesome,” he said. “It was a true collaboration. That was really special to me, because I just don’t do that very much. That was a big challenge personally and musically to get that to work.”

That’s not to say that things were easy for Daniels. He wrote on his blog during rehearsal week, “It’s difficult for me to let go of my idea of how these songs ‘should’ sound. I knew I’d have to do that to make room for what Matt White has to offer and to let Fight the Big Bull bring themselves to the songs but it’s very much for me learning a new way of working, or at least remembering what it’s like to ‘be in a band’ with other songwriters/composers. Also this experience reminds just how entirely arbitrary aesthetics are.”

Just as White doesn’t often sign himself up for musical collaborations, he says he tries to avoid situations where someone can suggest changes to his arrangements. “This was a 50/50 type situation, and I did owe him an audience to some extent on how to do the arrangements. So that was very difficult for me, and it was for him too.”

As Daniels would write after the first rehearsal, “Kinda 2 cooks in the kitchen so to speak but I think that tension is ultimately going to prove interesting.”

The changes to White’s arrangements that Daniels did suggest during rehearsals surprised White. “He had more of an attention to detail than I was expecting. He was worried about things that I would never give a shit about.

“Some of it was a little frustrating at first. He heard the band and knew it was loose and messy. It’s a point. He kind of wanted this tight aesthetic.”

They pulled it together, but it wasn’t easy. With six nights of rehearsals and three days of recording (in addition to White’s writing marathon the days before Daniels’s arrival), White gives it the honor of being the most stressful session he’s ever done.

“It’s incredible that we pulled this off.”

I Mean To Live Here Still will be available for purchase on June 22, 2010, on Amazon, other music vendors, or through Fat Cat Records. Visit David Karsten Daniels online. Visit Fight the Big Bull online.

White: “Even though once he got here it was a very mutual collaboration, as far as organizing, he was the big mover and shaker. I didn’t really do too much to make it happen.”

“He said from the get go that he wanted this to be not a rock record backed by a jazz band and not a jazz group with some rock dude singing over it, but very much a half and half type record, where it’s both. It really is both. He was up front about that. That’s part of the thing: putting our name on the record, which is fairly abnormal as far as things like that goes. You don’t normally see that. There’s usually a backing band situation. Obviously, it was kind of a draw for us to be involved with it.”

“The text scores weren’t really followed as closely as he or I expected. I thought I would work on them slowly from the text scores and it be one swift process. I didn’t look at anything for months. I looked at them like, “What is this? What was I even talking about? I don’t know what any of this means.” It did definitely help to have it loosely conceptualized, but there were some things that I thought were terrible ideas or I didn’t know what it meant. And I couldn’t call David and ask what I meant because I had already lied to him.”

“I think in a lot of ways, the more I get along here, it becomes a little more evident that I’m kind of like a rock and roll dude who has a lot of jazz skill sets. I think that’s true in a lot of areas in my life: working with songs and with singer-songwriters and that world, in every way, how we communicate, with language and musically. That helped me out in that situation. David went to music school. There is a set of language — like music school type language — that he can communicate with, too. That definitely helped out the process.”