This Saturday Richmond held a city-wide celebration for Civil War & Emancipation Day. I’m not much of a Civil War buff, but I do like music and guns. So off to Historic Tredegar Ironwork I went!

Actual Emancipation Day was Wednesday, April 13th, but the city-wide celebration was on Saturday, April 16th. From Shockoe Bottom to the Museum District, venues all over Richmond were hosting Civil-War-themed events: the Library of Virginia, the Maggie Walker National Historic Site, the Virginia Historical Society. But, the American Civil War Center (ACWC) at Historic Tredegar Ironworks, for me, held the most promise for a diverse and entertaining afternoon. 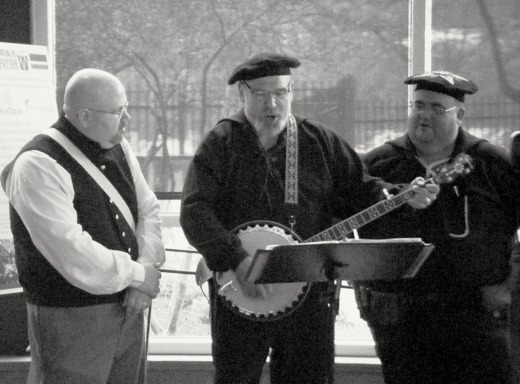 The afternoon began with a performance by The Press Gang – a three man acoustic group, dedicated to playing popular tunes from the Civil War, as well as traditional Celtic pub songs and Victorian Christmas carols. The band borrowed the name from the historic press gangs during the war whose job it was to coerce merchant sailors into joining the navy. The boys held true to their name by dressing as American Navy men from the 19th century, singing songs like the “Battle Hymn of the Republic” and “Bonnie Blue Flag,” accompanied by guitar and/or banjo, or sometimes sang a cappella.

Next was a performance from the Tredegar Brass Band, playing more favorites from the Civil War. They played “Dixie,” one of Abraham Lincoln’s favorite tunes, and “St. Patrick’s Day Quickstep,” as well as music by renowned composer, Steven Foster, whose music was very popular during the war. Brass instruments were rare in the South during the Civil War since they were chiefly manufactured in the North, so it would have been a treat for any Southerner on the home front to hear a group like the Tredegar Brass Band play, and sitting in the ACWC Theater surrounded by cannon shells and captured flag staffs, it was easy to imagine you had gone back in time.

After the music performances, came an artillery demonstration, where a group of re-enactors explained the process of firing a canon, its dangers and lethalness. Besides your regular cannonball, the demonstrators showed replicas of a bolt (just a ten pound chunk of iron used to destroy buildings and mess up battle formations), an artillery shell (an explosive round, basically a giant shotgun shell), and a canister shot (lead canister filled with tiny lead balls, use your imagination). After explanations were done, the re-enactors worked quickly, swiftly going through the motions of stuffing the canon and lighting the fuse, then BOOM! Tredegar Ironworks was the South’s most prominent domestic cannon foundry, so it was fitting to have the demonstration there.

The artillery talk was followed by a show featuring the Elegba Folklore Society. The performance company presented traditional, West African dances and slave monologues: stories of mothers separated from their children, slaves who were tortured. The presentation was very theatrical, the dancing was spectacular, the stories, incredibly sad. One of the speaker’s closed with:

“I won’t ask you if you enjoyed yourself, because it wasn’t supposed to be an enjoyable sort of thing.”

The monologues served the purpose of making sure the horrors of slavery are never forgotten, because those who forget the past are destined to repeat it, as so many famous historians have pointed out in one way or another. I’m not much of a Civil War buff, but I do like music and guns. Historic Tredegar made history come alive for me on Saturday and I’m very glad I braved the rain to check it out.