Boka Truck Downtown and on TV?

I had the opportunity to work downtown one day this summer, an area I’m not usually near during lunchtime. I was delighted by all of the various food trucks options available, and sad that near my normal office, I have only fast food and Panera to choose from.

From their press release:

Since Boka Truck’s inception earlier this year, www.BokaTruck.com has received over a quarter million web requests, and has run over thirty different variations on the fish taco. Inundated with e-mails and tweets from office dwellers unable to travel Richmond for the roaming food truck, Boka has developed a plan to feed these hungry daytime warriors. The new food service units will feature Asian-Mexican-American Fusion with an emphasis on fresh, local, seasonal ingredients, and a culinary edge noteworthy of a tablecloth. However, the food will still be presented and served in a street fashion with paper plates, foil liners, and biodegradable eco-friendly to go boxes. “We plan to offer an eclectic menu that offers everything from noodle bowls and soups, to sandwiches, tacos and specials like crab Rangoon flautas, or scallop and bacon potstickers with green onion Remoulade,” says Harris.

One truck is located on the corner of S. 10th Street and E Byrd Street in front of BB&T building and the other is on 11th between Broad and Marshall Streets. Plans are in the works for a third at VCU.

The menu won’t be the same as the Boka Truck due to limited space constraints and equipment variations, but Chef Harris insists that creative menu items will continue to evolve with the seasons. Boka is making a transition this very week in their carts, changing to a more customer-influenced menu to accommodate the broader downtown lunch market. The carts will likely take on another name and new signage very soon. The carts also expand Boka’s ability to cater multiple events at the same time, and they are working on a custom catering program including lunch boxes and private bookings.

You can find out their locations and plans at www.BokaTruck.com and you can follow them live on twitter @BokaTruck. Saturdays they can usually be found at the South of the James Market and the St. Stephens Farmers Market from 8am-12pm. Tuesdays they’re at the Byrd House Market from 3:30pm-7pm. 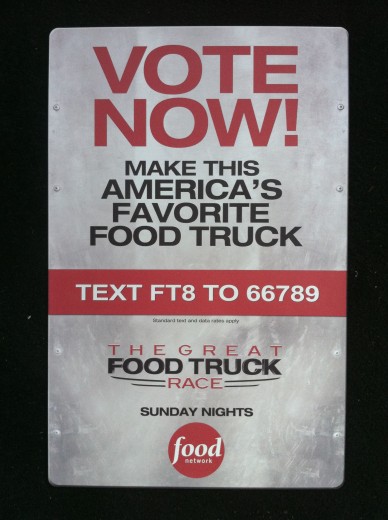 The Boka Truck has also been nominated by Richmond to be on the Food Network’s The Great Food Truck Race next season. I’ve been watching the current show and it is a lot of fun. Each truck clearly has their own personality, and I know Boka Truck’s enthusiasm for “takos for your mouf” will fit right in on the show.

You can vote for them to gain a spot as a contestant on the next season by texting FT8 to 66789 daily from August 29 to September 10. Typical text rates apply. If chosen, Boka will also win $10,000 which will help them buy equipment and serve better and more refined cuisine. Their main truck has been riddled with mechanical problems and the engine just died, so that would be a tremendous help.