When Mike Yavorsky left Richmond for New York City in 1998 he had a plan: finish culinary school, work with some of the best chefs, and come back to RVA to start his own restaurant. He’s done just that. When Belmont Food Shop opened last month, Richmond unknowingly found itself at the tail end of Mike Yavorsky’s 10-year plan. The owner and chef has spent the last two years in bureaucratic limbo, biding his time by refurbishing 27 N. Belmont Avenue into the restaurant that stands there today. And as Yavorsky said last week, “the dust is literally settling.”

Yavorsky–tall, thin, and dark haired save for the tiny copse of white on his sideburns–is a stranger to neither Richmond nor kitchens. “I cooked my way through VCU,” he said in his restaurant. It was shortly after graduating that, in 1998, Yavorsky attended the Culinary Institute of America in New York City. After graduating in 2000, he hatched an ambitious 10-year plan: gain experience in several NYC restaurants then return to Richmond to start his own.

Yavorsky said the five years he spent in NYC were for “building skills and not a resume,” cooking alongside an eclectic medley of chefs.

Among them was a French-trained cook from Bombay, India from whom Yavorsky said he learned new ways to implement spices. He also worked with an Israeli chef and even learned Austrian culinary techniques, all without leaving the Big Apple. Stripped down, Yavorsky said those five years taught him “how to make simple food taste good.” On Memorial Day weekend 2005, Yavorsky returned to Richmond with sights set on starting his own restaurant.

Finding full-time kitchen work in the summer can be challenging for cooks in Richmond. Students have left and and seats are empty. The summer of 2005 was no different. While kitchens couldn’t find the space for Yavorsky, an owner of a catering company, was in dire need of some help. It was Complete Catering, who operated in the Museum District at 27 N. Belmont.

He helped for several months, and eventually moved on to cooking at The Berkeley Hotel. In 2007, he was offered a job at Can Can. Not as a cook but as a waiter. Mindful of his plan to have his own restaurant, it “made sense to round myself out a bit,” as he put it, and learn how restaurants worked beyond the kitchen. “It got me to walk in the waiter’s shoes.” 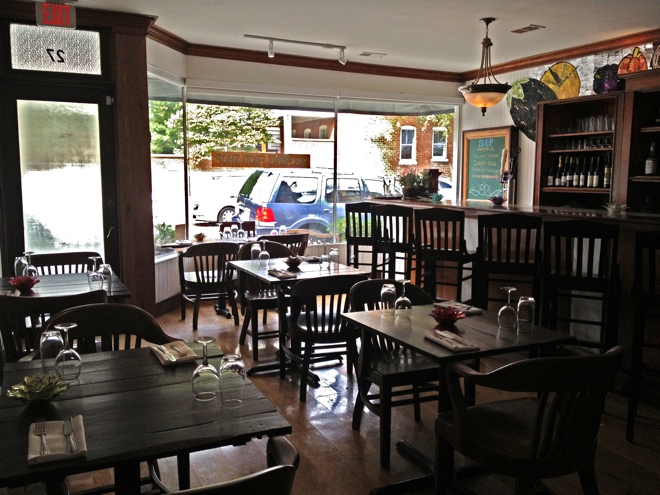 One day in 2009, while strolling through his Museum District neighborhood, Yavorsky happened upon that same catering company owner he worked for just after returning to Richmond four years prior. She wanted out of the space, one that first opened in 1929 as a grocery store. Just under 10 years after graduating culinary school, Yavorsky had found the space that would become his restaurant.

Although his 10-year plan didn’t include owning a catering company, the plan accommodated it nonetheless. The space he now owned couldn’t become a restaurant without City Council approving a special use permit. It was a process that, ideally, would take six months. It took two years.

He used profits from the catering company to fund the restaurant’s start-up costs. “I’ve always believed in myself and always believed in this space,” said Yavorsky, who holds no bitterness to the protracted bureaucratic experience. He bided his time; got his neighbors behind his cause.

While the permit process dragged on, Yavorsky was free to begin refurbishing the space for a restaurant he hoped it would one day become. Resting on the bar were architecture plans for neighbors to freely review. Yavorsky didn’t want to shoehorn his restaurant into the Museum District; he wanted the support of local residents. “People say it fits the neighborhood…That’s why it was worth it to me to take my time.” Time was also on his side, albeit in another way.

In 1946, as automobile ownership flourished in post-World War II America, Richmond passed its first parking code. Zoned as a business since 1929, Yavorsky learned that 27 N. Belmont had been “grandfathered” into that code. As a result, Belmont Food Shop was given a break on the number of parking spaces it needed to provide.

The City told Yavorsky that Belmont Food Shop needed only 10 parking spaces (one space for every 100 square feet). Although a smaller number than it would have been otherwise, it was still a lot of spaces for the Museum District restaurant to come up with. Even when the City allowed three on-street parking spots, seven spaces still needed to be accounted for. Yavorsky’s decision to work with the neighborhood turned out to be good karma, as a neighbor came to the rescue. 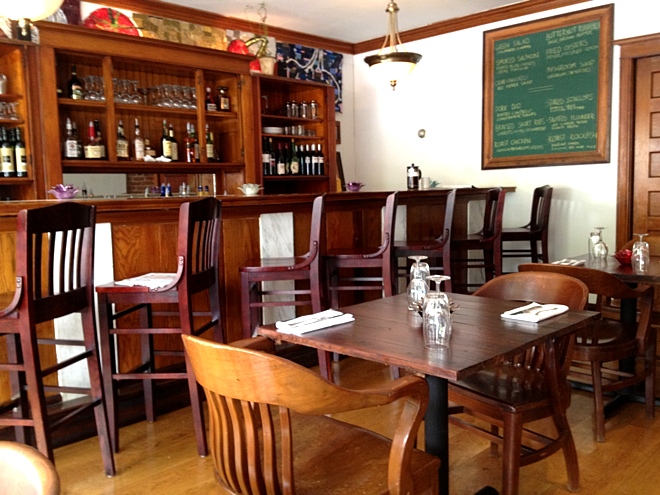 One day, Yavorsky struck up a conversation with the owner of the nearby Religious Goods Shop, and the topic of parking came up. The owner of the predominantly Catholic goods store said, since the shop closed at nearly the same time that Yavorsky’s restaurant would open, he would happily allow Belmont Food Shop customers to use the parking spaces directly behind his shop. There were seven spaces. Just the number Yavorsky needed.

On June 11th this year, Yavorsky went before the City Council and formally asked for his catering company to become a full-fledged restaurant. Beside him was the president of the Museum District Association who vouched for Yavorsky’s plans. City Council granted the special use permit. Belmont Food Shop was now a restaurant.

Belmont Food Shop is a 22-seat restaurant, half of which are bar stools, which creates a cozy, bistro-like environment. “People seem into the fact that it’s intimate,” said Yavorsky. But, because of Belmont Food Shop’s smaller size, said Yavorsky, “we can’t get by on volume.” Instead, the restaurant offers traditional food “that is creative and interesting” to justify a higher price point.

Entrées are $20 and include roasted pork loin and belly, seared scallops, and sautéed flounder. Yavorsky believes in his philosophy for Belmont Food Shop: “Take something that is simple, but do it in a thoughtful manner.” He wants the food and dining experience to stand out to customers–not the bill. “I want them to think about what they got and not the $20 they spend.”

After the dinner rush, Belmont Food Shop offers what Yavorsky terms a cook’s menu. It consists of rotating, off-menu options such as: grilled beef heart cooked in duck fat, grilled octopus, lamb heart filled with sausage, and more. The cook’s menu items will give Richmonders a taste of the outré at prices below $20.1

Now having seen his 10-year plan through, Yavorsky is concerned with making the restaurant an RVA fixture, just like the building it occupies. He also owns the space next door, which he can easily turn into a private dining area, or even create a retail store. Whatever he decides, Yavorsky doesn’t want his years of patience to be in vain. “I want to keep this going for a long, long time.”