Towards thee I roll, thou all-destroying but unconquering whale; to the last I grapple with thee; from hell’s heart I stab at thee; for hate’s sake I spit my last breath at thee. Robey Martin has given me so many things to think about in this Richmond Magazine article about Hardywood’s impeding release of Foolery, an Imperial Milk Stout aged in bourbon barrels. Read the article, collect your thoughts, and then continue.

First, Milk Stouts are totally my jam! But my delicate constitution totally can’t handle a 14% beer–especially one that comes in a 750 mL bottle. Ultimately, my ambivalent feelings matter not, as only 500 bottles will be produced which means I will never ever try one. Sad face emoji.

Second, I am fascinated by beer whales (aka super rare, collectible beers). Hardywood’s Ginger Bread Stout is recognized as a whale (by whom? See! Fascinating), and now that they’ve got that one in the bag can they just declare any limited-release beer a new whale? Do they themselves even consider their beers whales, or is that strictly something beer nerds think about? I HAVE SO MANY QUESTIONS.

Third, Snapchat is totally a thing. And despite it being a thing specifically designed to share pictures and videos in a more private, less Facebook way, that clearly isn’t the reality. Lesson: don’t Snapchat pictures of your whale you wouldn’t want the rest of the world to see.

Despite the cold and decidedly un-springlike weather we’ve been having lately, the fine folks at Center of the Universe planted 30 hop rhizomes at Lewis Ginter this week (pictured above). They’re mostly Cascade hops provided by Piedmont Hops, but with a few Columbus hops thrown in to round out the flavor. Come fall, COTU will harvest the hops and use them in a community-themed beer.

Yet another media outlet named Hardywood’s Gingerbread Stout one of the best beers in the country. Zzz media outlets, zzz. Meanwhile, over at Beer Advocate, the Bros have given Triple Crossing’s Nectar and Knife DIPA a 96!

The RTD has a pair of beer articles ready for consumption. First up, this long article about the RVA homebrewing scene by Jacob Geiger. Chase it with this piece by Annie Tobey: “Should Richmond craft breweries be for adults only?” Nope, turns out.

Will Fisher submitted this picture to the RVANews Flickr group, and I’m in love with it. I’m interpreting it more like a honorable Viking funeral than a dumpster fire. 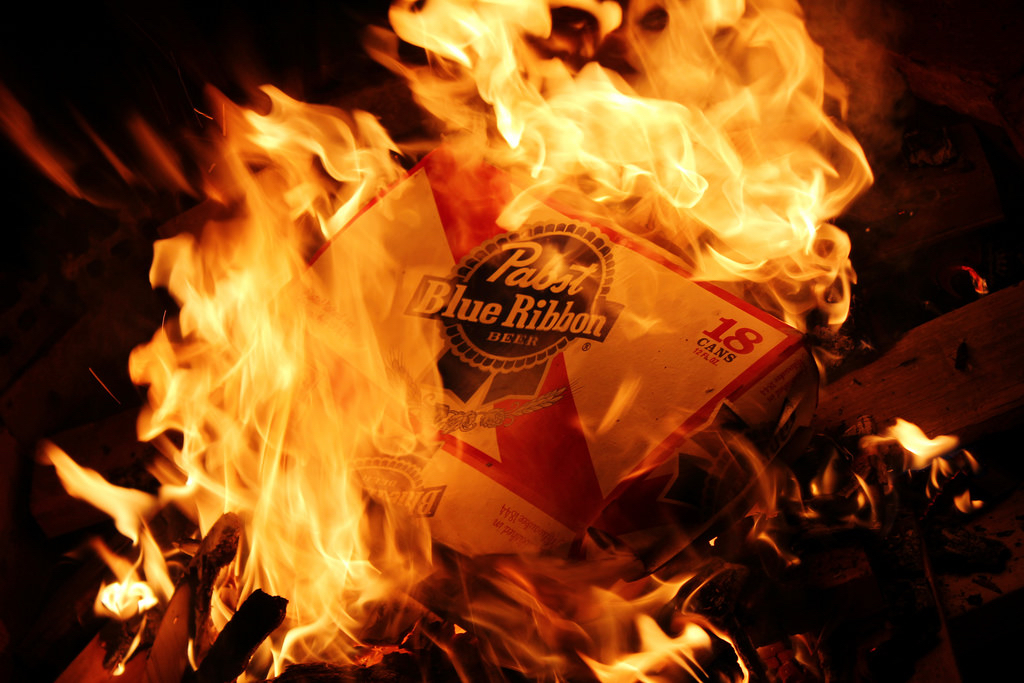 Tickets are just $18 bucks and get you two food/beer tickets and a T-shirt.

I love many things and one of them is beers powered by the earth’s supply of nitrogen. Another thing I love is beer in a can. Now, thanks to the Vault Brewing and Virginia-based River City Cannery (which, by the way, is out of Arlington, not Richmond), I can get both of those things without one of those annoying little widgets floating around in the can that I always think is a syringe.

Photo by: Center of the Universe